By Danny Esch: The success of the Deontay Wilder vs. Tyson Fury 2 event keeps rolling along with new numbers being released of the Wilder vs Fury 2 televised prelim/undercard fights making a huge splash on the success of the event with an impressive number of 1.42 million views once again just for the prelim combined on both platforms.

The undercard showcased a fight where both fighters had ties connected to former undefeated champion Deontay Wilder and current British unified champion Anthony Joshua in former world champion Charles Martin vs. Gerald Washington. The former IBF heavyweight world champion Martin fought and lost his title to Joshua, but defeated Washington who was defeated by Wilder by TKO back in 2017.

This event was a huge success and it was the first time in boxing history that the largest sports network ESPN took the financial chance to collaborate with another large television network FOX sports and the result was magic, to say the least.

In the first Wilder vs. Fury event in December 2018, it involved only one network and only generated about 325,000 views. But Bob Arum of Top Rank/ESPN and promoter of the newly crowned British champion Fury has been quoted as saying the main event did over 1 million in which early numbers released by NON-Top Rank / NON-ESPN / FOX members suggested 750,000 to 850,000 views.

In my opinion, if the Prelim fight did so well and the gate broke records for heavyweight fights in Las Vegas in which Lennox Lewis had an 8th round knockout of Mike Tyson in June of 2002, then I would imagine the main event of Wilder vs Fury 2 will do very well.

How it worked on both networks:

Fox Sports 1 and FOX Deportes showcased the 90-minute event on its network from 7:30 to 9:00 pm ET while ESPNews picked up the first 30 min before turning over to the flagship ESPN broadcast at 8:00 pm at the end of their coverage of the popular college basketball game. As a result, this figure is considered the best performing prelim card since 2017 that showcased Cuban welterweight Yordenius Ugas’ 10th round win over Thomas Dulorme.

“In this fight, he won every round and knocked him down twice,” said Max Kellerman to Champside of the Fury vs. Wilder 2 fight. “They’ve fought 19 rounds, and I think Tyson has won at least 14 of them if not 17 of them. I don’t think he [Wilder] can win a fight on points, and if he did, it would be because he knocked him down and was piling up points that way.

“I don’t think there’s anything Wilder can do other than land a big right hand between now and a rematch that would change the result. And the thing about Fury is he’s shown that he can be caught with a right hand in the 12th round, get up and finish the fight strong. Even then, it’s not a great chance for Deontay.

“The right thing to do would be to build Deontay up, get him a fight against a guy he can knockout easily just to get him through a training camp to get him his confidence back. Get a big guy that can do certain things that resemble Tyson Fury a little bit. It’ll be hard to do, but you can find a big body like that.

Get a win there, and then fight a live body that has a chance to win. If Deontay did that in those three fights in the course of a year let’s say, he could refine things and work on a game plan. But other than a big right-hand, I don’t see what he could do between now and a rematch that I think he could win a fight.

“Punchers a lot of time have a hard time generating force going backward. So he made a puncher go backwards and that was basically a wrap,” said Kellerman about Fury backing Wilder up to take away his power. “Even then, I felt like [Wilder could land something to knockout Fury], because Deontay throws awkward hooking right-hands off his backfoot.

“He’s supposed to throw it straight. He throws that. Everyone thinks he only has that long right–hand, but he also has the medium distance, shorter, weird hook off the back foot that knocks people out. I was thinking, ‘Tyson better watch that.’ Even at the very end, a hurt puncher is dangerous, but it was a 1 in a 100 shot that he could land something like that as it was, and he got stopped. It was a big fight. I could think Margarito and Cotto, Joshua and Klitschko and Mosley and De La Hoya or let alone Holyfield fights or Tyson fights.

There’s nothing like a big fight atmosphere in all of sports. It’s the only contest where, ‘ding-ding,’ this could end at any moment. And particularly with a puncher like Wilder, you’re on pins and needles the whole time. It’s a great atmosphere. If Spence-Crawford could be made, I think that’s the best fight in boxing. You know, if Spence is recovered from his injuries and shows he’s the same guy, that’s the best fight you can make in boxing,” said Kellerman. 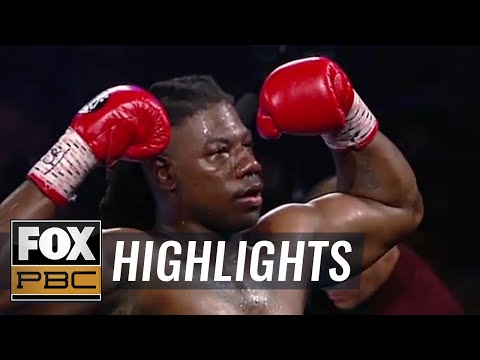