Avanesyan vs. Kelly: The story so far 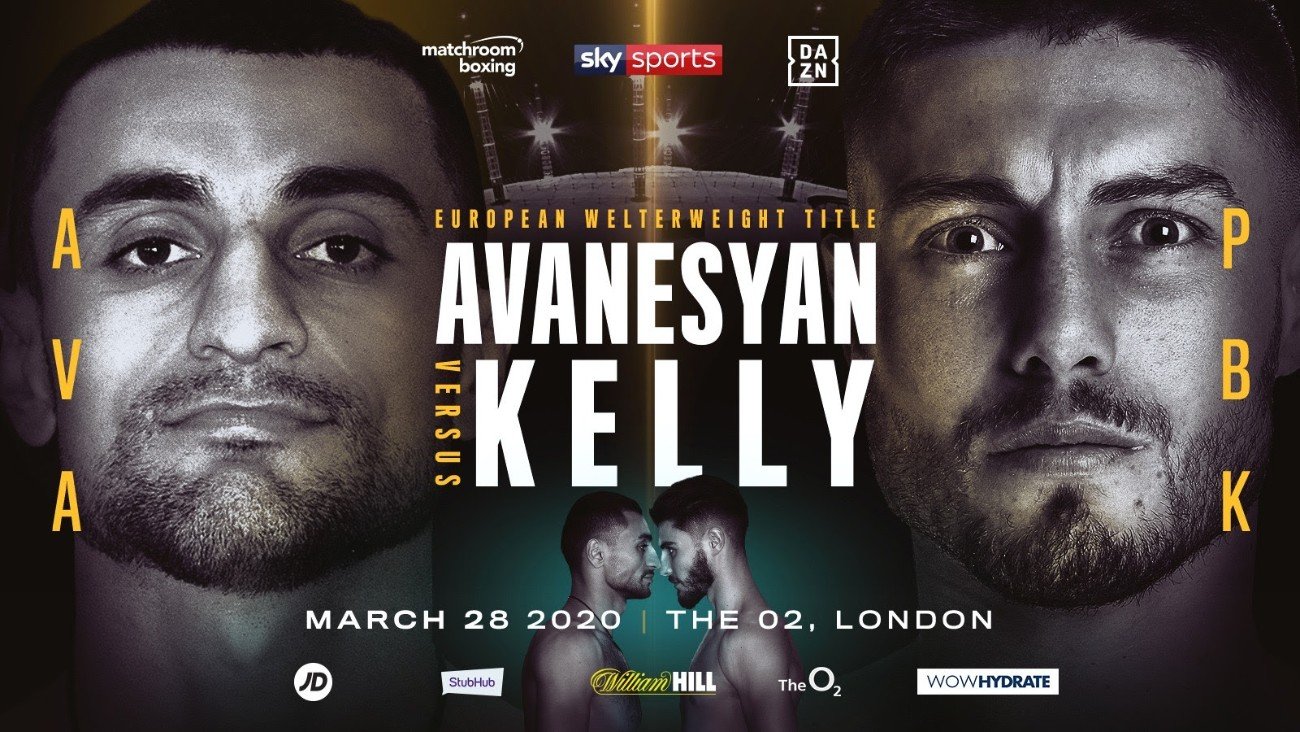 December 8th, 2018: Kelly cites illness and the fight is off just hours before the fight card is scheduled to begin.

I remember being disappointed when the initial fight disappeared and in equal measure excited when attending last month’s pre-fight press conference to promote their March 28th fight for the European welterweight title now held by Avanesyan. To get to the bottom of the story, I wanted to speak to someone involved. So, I contacted Avanesyan’s manager, Neil Marsh who spoke with me at length about everything that happened before and since December 2018.

There were no early indications that anything untoward was going to unfold when negotiating the fight. In fact, Marsh was surprised at how smoothly it panned out. “We got the offer when I was at the Glenn Foot vs. Robbie Davis Jr. fight, we accepted the fight and we was happy,” he told me. “We accepted the purse and signed the deal. No problems whatsoever; straightforward process.”

The contest was scheduled to be over twelve rounds for Kelly’s WBA International welterweight title. As fight night neared, the number of rounds began to be questioned by Kelly and his manager/trainer, Adam Booth. “They came to us wanting to change the fight from twelve rounds to ten rounds, which I said, ‘no’. For us, we wanted to take Kelly out late and we thought we’d be giving an unfair advantage,” Marsh revealed. “They said this was always the case – it was always a ten-rounder. I’ve shown them an e-mail from the WBA (proving otherwise) saying, ‘don’t lie to me’. They threatened to pull out.”

The story was developing quickly with little time left. “A leading Matchroom official comes up to me and they offered us certain things to accept the fight,” Marsh told me. “I went back to David and said you’re being offered X, Y, and Z. He accepted the ten-rounder reluctantly.”

The Russian had a new-born baby to think of and the fight purse was a necessity for him and his family. He was willing to concede any advantage to proceed with the fight despite Marsh telling him to pull out and not give in.

At the rules meeting, the behavior of Booth began to appear suspicious to Marsh and Avanesyan’s trainer, Carl Greaves. “Me and Carl Greaves are looking at the gloves and Adam Booth doesn’t even open them. The matchmaker comes to me a few hours later and said, ‘I’m sorry, the fight’s off’.”

He continued, “The morning of the fight, I saw Adam Booth going to his car packing bags. So, we all knew.” Marsh wasn’t the only one to see this as other fighters and trainers also witnessed the unusual behavior.

With the fight scrapped at such short notice, it was impossible to replace Kelly. Months of training and preparation were wasted. Matchroom kindly offered compensation which Marsh was grateful for, but losing out on a fight purse was devastating for Avanesyan.

However, in hindsight, things could not have panned out any better for David, Carl, and Neil. The opportunity arose to fight for the European 147lbs title in Spain against the then 27-0 champion, Kerman Lejarraga. In 2018, Lejarraga had knocked out Bradley Skeete and Frankie Gavin. The team was under no illusion of how difficult the challenge would be. There was a large amount of risk; countered by glorious reward. It paid dividends.

Fortune favored the brave not once, but twice. Avanesyan returned to Bilbao to beat Lejarraga in the first-round of their contractually-obligated rematch and in doing so, really began to show what he is capable of. Meanwhile, Kelly’s name began to surface again as he was named mandatory for the European title held by Avanesyan.

“Josh Kelly then got ordered. Eddie asked me, ‘we need a bit more time for Josh Kelly’. They wanted to get a bit of rust off him and I said, ‘not a problem, but we want a fight’. They gave us Del Rio topping the bill in Spain,” Marsh explained. An easy night followed with another first-round knockout.

Contracts for Avanesyan vs. Kelly are signed. The deal is seemingly done, but suddenly amendments are requested for VADA drug testing – not a problem for Marsh to accept. “David Avanesyan is cleaner than a whistle. What he’s got is a burning desire and he’s hungry to get back to the top,” he proudly exclaimed. Contracts were then amended and within days VADA was in the outback of Russia taking David’s blood.

Last month, I attended the pre-fight press conference for the bout which will now headline a Sky Sports & DAZN card at the O2 Arena in London. In Central London at the presser, Marsh laid out the details of everything that had occurred to date. The room was silent as the media listened to everything he wanted to get off his chest. It was February 14th, so fittingly, Marsh proceeded to hand a red rose and a packet of condoms to Booth in the hope his fighter won’t ‘pull out’ this time!

Marsh explains to me that he’s always respected Booth but claims, “he mugged me off”. Insinuations had been made but with VADA testing in place, there can be no more accusations that anyone might be cheating.

After everything that’s happened, now is the time to stop dwelling on the past and finally look forward to what promises to be a stellar contest. The winner will be in an enviable position of top dog in Europe and with a very high world ranking to prove it.

“We’re under no illusion we’re the away fighter and we’re under no illusion this is to catapult Josh Kelly to that next level,” Marsh admitted. “But we’re nobody’s stepping stone. We do think that Josh is a talented kid, we’re not overlooking him. We just think boxing is about levels and we accepted the fight a long time ago and we don’t see significant improvement in Kelly since. If anything, we see massive strides for David for what he’s achieved. The one key ingredient is confidence. David is absolutely flying.”

From my position, outside of the camp, the feeling is that Avanesyan will be too much for the classy former Olympian. I’ve had numerous fans and insiders tell me they’re expecting him to defend his title, probably within the distance. One thing is for sure; Carl Greaves and Neil Marsh will have Avanesyan in tip-top shape and are 100% confident of the win. They also wish to thank the British boxing public for their support which has been “unbelievable”. Even after all the water under the bridge, Marsh concluded by saying he wishes Josh, “All the best with the camp.”

Boxing » News » Avanesyan vs. Kelly: The story so far