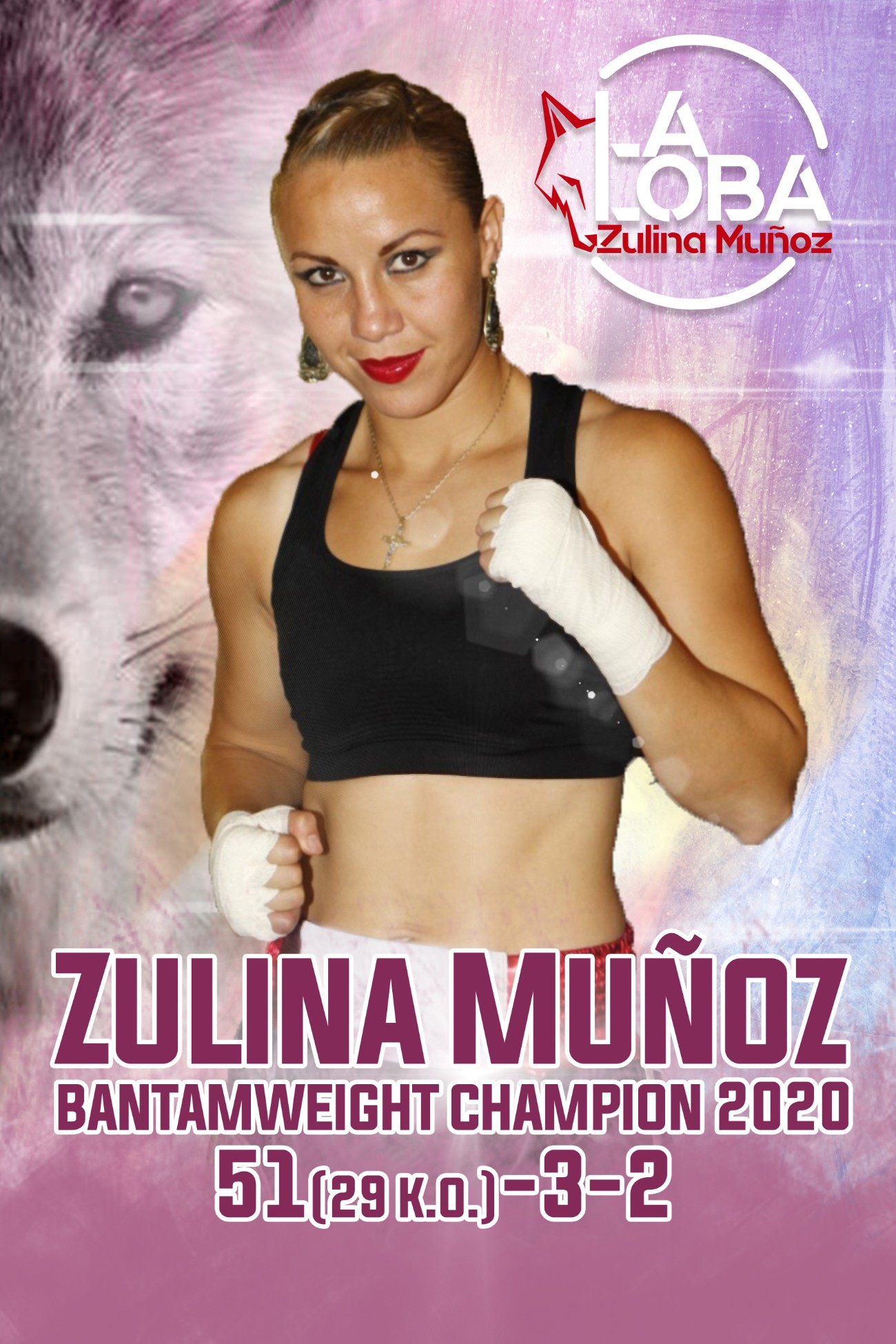 By Joe Serrat:  Many say you should never stop dreaming. That is definitely the case for 32-year-old former WBC super flyweight champion Zulina “La Loba” Muñoz (51-3-2, 29KO). Hailing from Mexico City, the mother of two has her sights set on becoming a two-divisional world champion this year looking for an opportunity for a bantamweight world title. The first step towards that goal is getting past Valeria “La Pequeña” Perez (12-7, 2KO) for the WBC International 118-pound title on March 8th.

From there Muñoz would like an opportunity for a world title.

“I would very much like to fight with the bantamweight champions,” Muñoz said recently in an exclusive interview. “Here in Mexico there is Mariana Juarez (WBC champion), there is also Daniela “Bonita” Bermudez (WBO champion) from Argentina and I would love a fight with either one. They would give me the opportunity to achieve my dream of being once again a world champion.”

“The doors will open to a higher level,” she answered of what a win over either one of the ones mentioned would mean. “Maybe a fight in the United States or a much bigger purse could be there. Also, there have been talks in facing Jackie Nava although she has not fought in quite some time. There were talks for a fight against her last year but I wouldn’t be opposed for it this year.”

Muñoz began boxing at 16. The former world champion followed her brother Francisco Muñoz to the gym. Initially, it wasn’t a love for the sport but a love for something else entirely different which led her to boxing. “I didn’t really like it but my father would talk a lot about my brother, mentioning how good he had looked in one of his fights, how they had robbed him of a win, how he had won by knockout, just always talking about him.”

“As his daughter then I was jealous, thinking that he would talk about him that way because he was his favorite,” she explained. “One day he took me to see my brother fight in the Golden Gloves tournament. I liked it a lot, I was totally captivated by my brother’s fight, the arena, the screaming, the ring, everything about it. I began to train but it was mostly to exercise, to drop some weight but mostly it was to get some attention from my father. It wasn’t until I went up into a ring to do my first sparring is when I said that I wanted to be a boxer. I realized I loved it. From there it wasn’t about getting attention from my dad but it was about me getting ready to be a fighter.”

After a short but successful amateur career, Muñoz went pro at 17 years of age in 2005. During that time Muñoz picked up her nickname of “La Loba”, the She-Wolf.

“The day of my first sparring my trainer, Mauro Ayala, had seen a documentary about wolves,” she explained with a smile. “He said that is the way he would see me in the ring. At first, I would be hunting my opponent and once I would have her trapped against a corner I would attack with everything. I didn’t really like it. Some of my gym mates heard my trainer call me that so they began calling me “Loba” as well. At first, I didn’t like it but as time went by the name becomes part of you and now wherever I go I am Zulina “La Loba” Muñoz.”

As a professional amassed 16 wins without a loss capturing the NABF bantamweight title in her seventh fight. In her first international bout, for the Global Boxing Union 115-pound title, Muñoz dropped a unanimous decision to Alesia Graf in Germany. A year later in her first major world title opportunity, Muñoz fought to a draw against Galina Ivanova for the WBC bantamweight title. After capturing the Mexican national, WBC Youth, WBC Silver 118-pound and WBC Silver 115-pound titles, Muñoz won her first world title in late 2012 with a unanimous decision over Maribel Ramirez.

“In the time I have been a professional boxer I have been very happy, motivated, above all satisfied and thankful with God for everything that He has allowed in my career,” she said. “Thanks to God I’ve had the good fortune of being Mexican national champion, International champion, North American champion, Youth world champion at bantamweight and then Silver and world titles at 115 pounds.”

Muñoz defended the title ten times including wins over Tenkai Tsunami, Alesia Graf and Gabriela Bouvier among others. She lost the title via a razor-thin close unanimous decision loss against Guadalupe Martinez in the summer of 2017. After that loss, Muñoz took a two-year break. Since then she has gone 4-1, 1KO with her last fight, a unanimous decision over Fredee Gonzalez in December, once again as a full-fledged bantamweight.

Through it, all the ones that have stood behind her through thick and thin have been her family, especially her father. “My father is a huge boxing fan and he has always supported me. A day doesn’t go by that my father doesn’t motivate me with his words to give my 100% in the gym and in my fights. He tells me I can achieve anything I set my mind to. He has always been with me, my whole family, my brothers.”

“My mom has always supported me but when I told her I wanted to be a fighter she didn’t like it,” she said. “She said it was too dangerous, she said she already had enough to worry about with my brother, that I was a woman. Even now after all my fights my mom still makes comments about maybe being time for me to quit. She respects my decision of me wanting to continue, that I love to box and that has become my livelihood. I can’t complain about it because without the support of my parents I probably would have never become a world champion, they have always supported me in everything.”

Currently, she is ranked #6 by the World Boxing Association, or WBA, in the bantamweight division.

“To be ranked #6 by the WBA is an extra motivation because it means the work we have been doing with my team is bearing fruit,” she says of her top-ten classification. “It means I can fight with the champion who is Mayerlin Rivas. We already fought once before which resulted in a draw. It would be a great rematch. I just need to keep working hard to keep going up in the ranks and earn that opportunity.”

Muñoz is adamant she still has some time left in her career and many more dreams to achieve such fighting in the mecca of boxing Las Vegas, Nevada, and capturing that second world title in as many divisions.

“Despite a majority of my life has been in boxing I have still not decided when to retire,” she answered when asked when she would hang up the gloves. “I think time will tell. I think my body will tell me. I think my career has good enough to be able to stay to the very end of my abilities. One thing is that I would not want to be a stepping stone. I am not immune to losing, I have lost many times, but I think the way you lose can tell you if you are getting to the point of stopping, it will tell you if you can still compete with the women who are coming up. I think right now in my life as well as in career I am at a very good place both mentally as well as physically.”