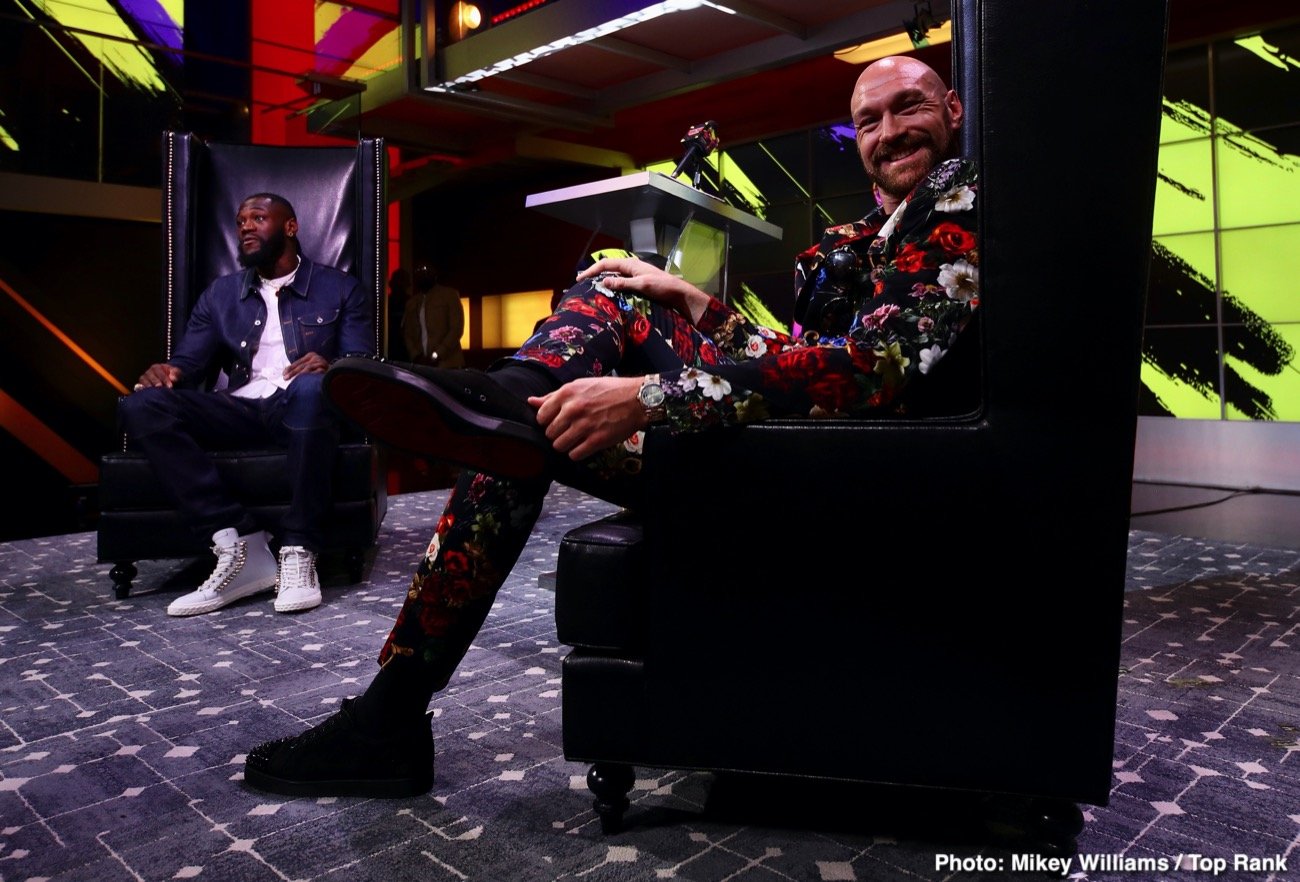 By Jim Maltzman: Tyson Fury acknowledged on Tuesday that he WON’T be fighting Anthony Joshua next due to him having an agreement for a trilogy fight against WBC heavyweight champion Deontay Wilder, regardless of who wins their rematch this Saturday.

Fury says “The MONEY is too big” not to have a third fight with ‘Bronze Bomber’ Wilder. Tyson is even talking about a possible ‘fourth and fifth‘ fight against Deontay, which means he might not be retiring after his next 3 fights after all.

Fury (29-0-1, 20 KOs) wanted to make it clear to the media that a third fight against Wilder (42-0-1, 41 KOs) comes next. Tyson was forced to say something about his plans for after this Saturday because Joshua’s promoter Eddie Hearn had been broadcasting that he intended on making an offer to the winner of the Wilder-Fury 2 fight to face Joshua next.

Unfortunately for Hearn and Joshua, Fury says that’s not going to happen. He plans on beating Wilder and then giving him a third fight. The loser of this Saturday’s Wilder-Fury 2 fight has the right to trigger the rematch clause that exists in the contract for that fight to force a trilogy match.

Hearn probably realized that it was a longshot anyway to get the winner of the Wilder vs. Fury II contest to face Joshua because it was too unlikely to happen.

It doesn’t matter who loses this Saturday, the loser is going to want to avenge that loss immediately in a third fight. Fury and Wilder have too much pride for them to walk away from a loss without forcing the third fight.

Wilder trilogy fight will be next, NOT Joshua says Fury

“No, I don’t unfortunately,” said Fury said to Sky Sports Boxing when asked if he sees himself fighting a unification fight with Anthony Joshua next. “I got another fight with Wilder. And I got a trilogy with old Deontay Wilder, and then we’ll see where that goes, and who knows? I may have a fourth and fifth fight.

“I think the money is too big not to have it [the trilogy], you know?” said Fury in continuing on the subject of a third fight with Wilder.”This is the prize-fighting game. So there’s too much money in the pot for him not to want the rematch, even if he loses. I don’t lose, so I’m giving him a rematch either way. All I do is win, win, win, no matter what, unless I get a draw,” said Fury.

Joshua’s promoter Hearn has to be upset right now after hearing the news the Wilder-Fury trilogy plans. For all intents and purposes, Joshua is blocked out by Wilder and Fury. This is nothing new for AJ, as he was blocked out after the first time Wilder and Fury fought in 2018.

There’s massive money for Fury and Wilder to make in a trilogy match. Even if one of these two big heavyweights get knocked out early this Saturday, the fans will have a lot of interest in seeing the third fight. Look what happened with Joshua when he was knocked out by Andy Ruiz Jr. The fans were more interested in the rematch than they were the first fight.

Fury: I’m going to give Wilder a boxing lesson

“I’ll be targeting big swinging hooks, head and body,” said Fury. “He’s an easy target to hit, so I just need to land on it, and it’s over. I don’t think he’s ever been involved in a war, not once. It wasn’t really a war,” said Tyson about Wilder’s first fight against Luis Ortiz.

“It was Wilder getting batted around a little bit in round 5,” Fury said on Wilder’s fight with Ortiz. “A war is when two men are punching toe-to-toe. He’s never been involved in a dog fight, Wilder. Not once. He’s always been out-boxed continuously, and then pulled a big shot out of the bag and knocked somebody out or he’s won quite comfortably knocking them out.

“I don’t believe he’s been involved in a proper war,” Fury said about Wilder. “Let’s say this is going to be proper trench warfare, and it’ll test who’s got the biggest heart, and who wants it more,” said Fury.

Tyson sounds like he’s serious about wanting to make his rematch with Wilder into a “trench warfare” style fight. In Fury’s last fight against Otto Wallin, he took the battle to the inside and fought well. Both fighters were throwing a lot of shots in close but got the better of it. Wilder probably won’t enjoy himself if he’s forced to fight on the inside for prolonged periods of time.

Tyson doubts Wilder can beat him

“There are no other stand out fighters in boxing that stand out other than heavyweights,” said Fury. “When the two big heavyweights get it on, it sends massive shockwaves around the world, and everyone gets involved. This is going nuts with Wilder-Fury 2.

“I’m so happy we were able to come to an agreement and make the fight,” said Fury. “I hope Wilder puts a good show on and gives me a good tough fight because I’ve been searching for 12 years for somebody to beat me. If Wilder is the man, then God bless him, but I don’t think he is,” said Fury.

With Fury’s unbeaten record, it’s not surprising that he doesn’t believe Wilder can beat him. He’s never been beaten yet, and he had Wilder utterly confused last time.

If Fury’s new conditioning has improved his stamina and ability to maneuver around the ring, it’s going to be hard for Wilder to deal with that. Right now, Fury looks in great physical shape, but we don’t know if he’s in ‘boxing shape.’ He just looks like someone that has been dieting and doing a lot of aerobics.