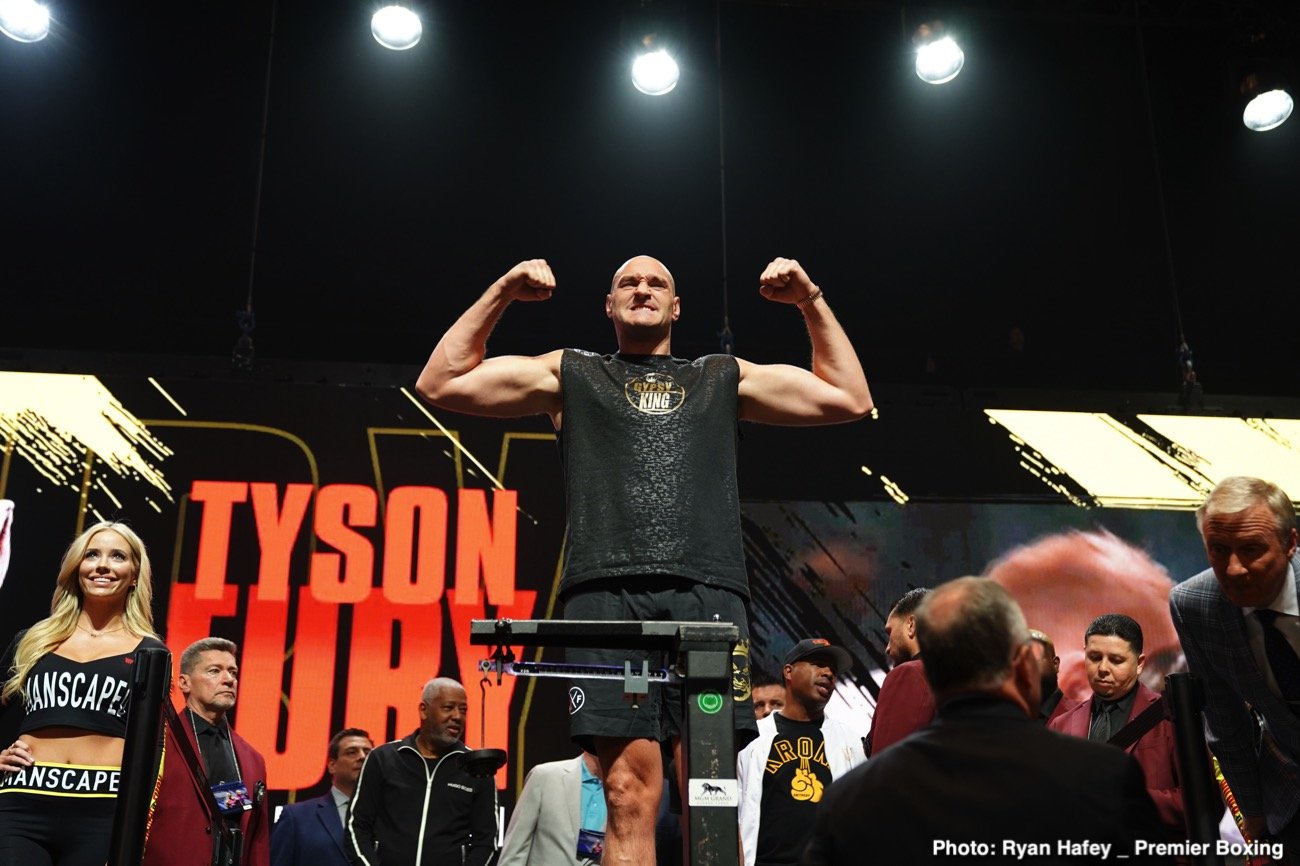 By Charles Brun: Andre ‘SOG’ Ward has no issues with Tyson Fury’s stated game plan to go after Deontay Wilder to try and stop him within the first two rounds in their rematch.

Fury’s weight was fine in the first Wilder fight

In Ward’s view, Fury’s weight was fine last time, and he needed to change what had worked so well. Fury’s decision to add a lot of weight could result in disaster for him if he’s too big to get out of the way of Wilder’s big shots.

Although initially, Ward was concerned with Fury’s decision to go on the attack mode against the dangerous puncher Wilder (42-0-1, 41 KOs), he now believes that’s a game plan that could work for him.  As long Fury is able to pass through the ‘no man’s land’ in order for him to get near enough to Wilder to land his shots, he could be successful tonight.

Unlike Wilder, Fury isn’t able to throw long punches with power. Fury is at his best when he’s a medium distance when it comes to throwing power shots. He can’t throw long power shots the way Wilder can. When Fury is on the outside, he’s limited to jabbing.

Andre doesn’t agree with Fury’s decision to bulk up

“When I first heard the new game plan from Tyson Fury, I didn’t believe it,” said Andre Ward to ESPN/FOX fighter roundtable. “But then I heard it a little bit more…and I think I fully believe him. If you watched the first fight, there was an invisible line in the center of the ring. And probably 50% of the fight, Tyson Fury toed that line and didn’t allow Deontay Wilder to push him back.

“I know most people think that Tyson Fury ran around the ring and boxed, and was cute the whole night, but that’s not necessarily true. He had his best success when he attacked Deontay Wilder. So the game plan is not entirely crazy. The issue I have is the weight gain and the bulk up. I don’t agree with that.

“A 250-pound man is a big enough guy to push back a fighter who is 225. So I don’t agree with the weight gain. I understand it in theory, but I wouldn’t recommend it. But the game plan is not entirely crazy. You have a guy with an 83-inch reach [Wilder], and is boxing him, Tyson Fury, like he did in the first fight, was that really a safe thing for him to do?” said Ward.

Fury says he’s putting on weight in order to make sure he knocks out Wilder because he doesn’t think he can win a decision. For Fury to bulk up to 270, he’s likely thinking of the two previous times he was at that weight for his fights against Sefer Seferi and Joey Abell. However, those weren’t world-class fighters.

The 6’9″ Fury’s new physique is similar to one of Wilder’s past opponents Nicolai Firtha. Wilder destroyed the 6’6″, 252 lb Firtha in four rounds in 2013.

Ward: Getting inside will be hazardous for Fury

“He got caught twice and nearly got knocked out in the 12th round,” Ward said about Fury in his first fight with Deontay. “So there’s really no safe place inside the ring with a guy like Deontay Wilder. I’m not opposed to him [Fury] saying he’s going to push the issue, and be bold enough and brash enough to push a guy back, who typically doesn’t have to go back.

“It’s dangerous, and it’s no man’s land from being on the outside and getting on the inside,” said Ward about Fury taking risks to get inside against Wilder. “That’s the hard part. How are you [Fury] going to get on the inside, and push him back consistently often enough where you get hit, and you hit him back where you’re able to get in that nick and tuck type of fight.

If Fury’s rationale for bulking up to 273 lbs is for him to mug Wilder on the inside, it’s going to be risky for him to try that approach. Wilder is going to have a huge target to aim his right-hand bombs when Fury plods forward looking to close the distance to start mauling.

If Fury plans on initiating 10 or more inside sequences per round, he’s going to leave himself open to getting hit with straight rights each time he comes forward. On the inside, Wilder is still a powerful puncher with more power than Fury. If you look at Wilder’s fights against Firtha and Kelvin Price, they both tried to maul him on the inside, and it didn’t work for them. Those were big heavyweights. Price was 6’7″, 244 lbs. Wilder staggered Price after clubbing him in close.

Holyfield picking Wilder to beat Fury based on his power

“I think Deontay because of the confidence that he has, and he’s making the adjustments to eventually catch Tyson Fury,” said Holyfield to ESPN. “The one thing that Deontay has is he has the punching power, and his skills are getting better. He’s a little more patient than he used to be.

“I think that because he’s able to make the limited adjustments he needs to make, I think his chances are a lot greater due to the power,” Holyfield said of Wilder. “Deontay is someone that fights anybody, and I think people are interested in a unification champion.

The power game from Wilder gives him more chances of success than Fury. Wilder can fall behind in the fight like he did against Luis Ortiz, and still bail himself out with his right hand.

Where Fury could be in trouble for this fight is the fact that referee Jack Reiss won’t be working it. This is the referee that gave a count to Fury after he was knocked cold by Wilder in the 12th round. Some boxing fans believe Reiss bent over backwards to give Fury a chance after he was knocked out, and they think should have been stopped on the spot.

If Fury gets knocked cold tonight, will the referee give a count to immediately halt the fight? Fury can’t bank on every referee giving him a count each time he’s knocked out by Wilder. It looks odd, especially if the undercard fights have referees stopping fights quickly when a fighter is knocked out.

Briedis vs Dorticos in Riga – ‘We are going to see a war!’ »