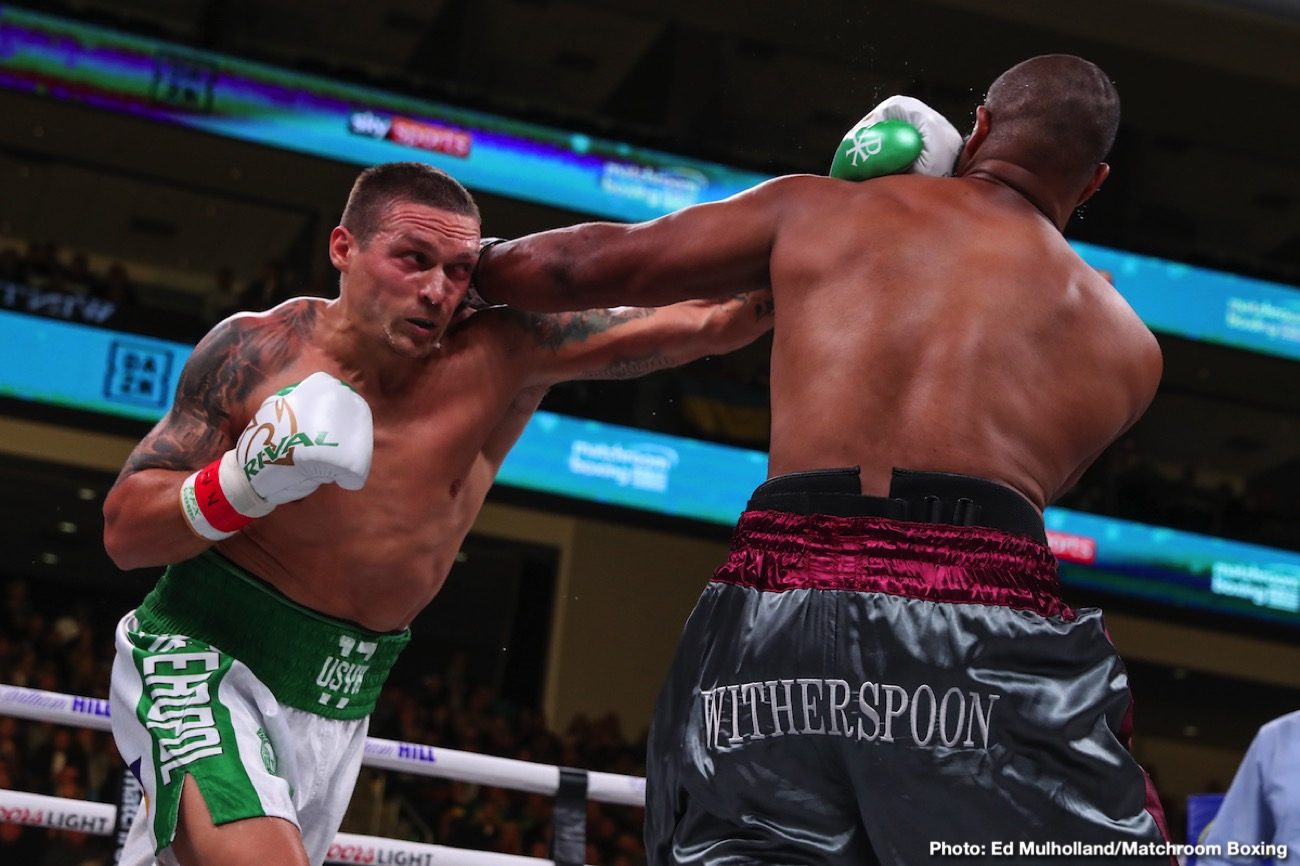 Hearn says he’ll be announcing the Joshua-Pulev, Usyk-Chisora & Whyte-Povetkin fights in the “next couple of weeks.

Former cruiserweight champion and current WBO heavyweight mandatory Usyk (17-0, 13 KOs) will be fighting Chisora (32-9, 23 KOs) in April in the UK. Those two have agreed to terms, according to Hearn.

Next up is WBC mandatory Whyte (27-1, 18 KOs) will be fighting former WBA heavyweight champion Povetkin (35-2-1, 24 KOs) in May. Whyte needed more time to lose weight, as he came into his last fight at a career high of 271 lbs against Mariusz Wach on December 7, and he had problems beating the 6’7 1/2″ Polish fighter. Whyte took a career’s worth of punishment in that fight in winning a 10 round unanimous decision.

“It’s amazing because when you look at it. We pretty much agreed to terms with Usyk and Chisora,” said Hearn to IFL TV. “It’ll be a couple of weeks later than what we first anticipated. We’ve got Whyte-Povetkin. We’ve got three potential big heavyweight nights all taking place in the UK.

“So be ready for the news when the tickets go on sale,” continued Hearn. “Store your money for those tickets in those three fights, all being announced in the next couple of weeks.”

Usyk vs. Chisora is a decent fight, but could potentially be bad. If Usyk moves around the ring like he did against Michael Hunter, he’ll be booed unmercifully by the UK fans.

“Dillian is taking a little bit longer to get back into the ring, because he’s got a new fitness regime, and new people working with him on that side,” said Hearn. “He felt he was too heavy in Saudi. It’s been a little bit frustrating, because we could have gone with him on March 28th or April, but he needs a little bit more time.

“He wants to get it right,” said Hearn about Whyte. “It’s going to be a very big year for him, and you’re going to see Whyte-Povetkin, and it’s going to be fireworks.

Povetkin, 40, is a big fight for Whyte, but it’s not the huge fights that Whyte wanted against Andy Ruiz Jr. and Deontay Wilder. It’s unclear who Hearn has in mind for Whyte to fight after his fight with Povetkin in May.

Obviously, Whyte is going to need to win that fight, because if he loses, it’s going to be bad for him. He’ll no longer be the WBC mandatory challenger and WBC interim champ. That means Whyte can forget about a title shot against the Wilder vs. Tyson Fury winner.


« Anthony Joshua vs. Kubrat Pulev in London in June – Hearn