Tyson Fury: ‘I want to give Deontay Wilder some PAYBACK’ 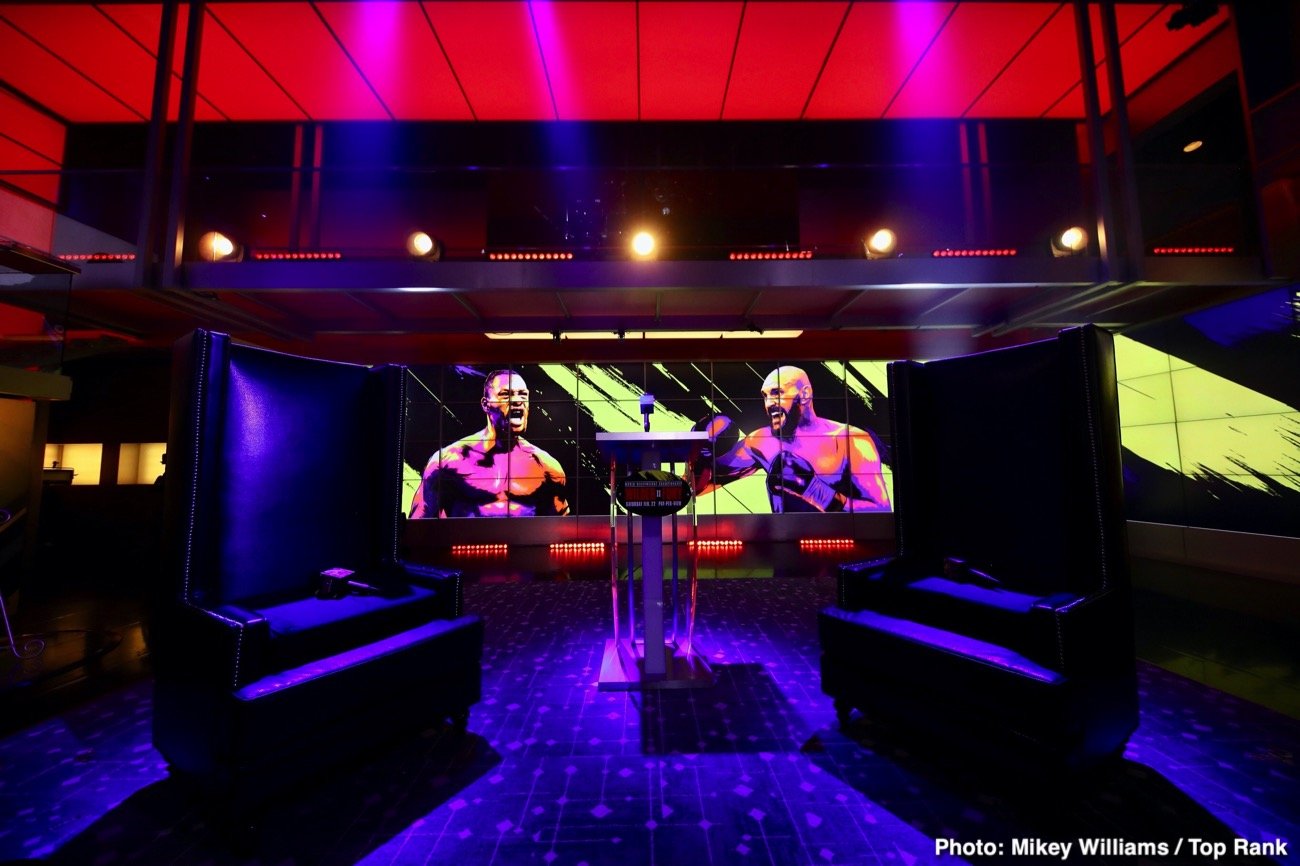 By Kenneth Friedman: Tyson Fury says he’s absolutely serious about wanting to knockout Deontay Wilder early in their rematch next Saturday night in Las Vegas. ‘The Gypsy King’ Fury isn’t playing around with his emphasis on wanting to go and score a fast stoppage win over WBC heavyweight champion Wilder (42-0-1, 41 KOs) in their fight on February 22 at the MGM Grand in Las Vegas, Nevada.

In Fury’s mind, it’s about paying Wilder back for him dropping him twice in their first fight in December 2018. Fury doesn’t want to give Wilder a chance to repeat that, so he’s going to jump on him early to ensure he doesn’t land his right hand.

Fury’s jab now a weapon for him

During sparring for this fight, Fury has discovered that his jab has become a formidable weapon for him, which he’s used to get the better of sparring partners. Fury maintains that he’s going to flatten Wilder with his straight jab with his knuckles down.

Tyson had a lot of success in hitting Wilder with jabs in their previous fight, but the shots looked weak. For Fury to KO Wilder with his jab, he’ll need to sit down on it more, because he was pawing with it last time.

Fury will look for quick KO of Wilder

“I think this rematch is a completely different fight,” said Fury to fighthub on his rematch with Wilder. “I’m looking for a knockout from the first bell, and I’m sure he will as well. I think it’ll be a quicker fight than it was. And I don’t see it lasting long.

“I just want to give him some payback and have him kiss the canvas a few times,” said Fury about wanting to pay Wilder back for getting dropped twice. “I’m not having no diet cokes, and not having a hundred coffees a day. I’m having it as serious as I can. I can’t prepare any better than I have.

“I’m getting to bed early, and waking up early,” said Fury. “I’m eating the right foods, and drinking tons of water, and I’m having vitamins. I’ve got the right sparring partners. I’ve got the trainer. Everything is as it should be. I can’t remember having a fight where everything was going so well,” said Fury.

Tyson looks thinner, older and slightly worn from the combination of hard work and a strict diet. Hopefully, Fury hasn’t depleted himself with overtraining, and not eating it enough. During the interview, Fury looked worn, haggard and not the energetic and well-rested looking person we saw in the kickoff press conference.  The youthful look that Fury had at the start of training camp is gone. He looks like he’s aged five years.

From what Fury is saying, he’s denied himself a lot of the foods that he’s been accustomed to eating. Sometimes reducing calories can help a fighter, but in a lot of cases it leads to them being weaker. That’s not what Fury needs if his ultimate goal is to knockout Wilder in the early going next Saturday night.

Tyson: I win if it ends early or goes the full 12

“The world is going to tune in to watch me and Deontay throw down,” Fury said. “I don’t want anything left unturned after this fight of ‘what ifs,’ because we all know we’ve done everything we can do. We can’t prepare any more for a fight. There’s no more to be done.

“I don’t say anything about it,” said Fury when asked about what he thinks about people saying he likely won’t knockout Wilder. “I’ve got 20 knockouts out of 29. Anyone can be knocked out. We’re only human beings. No doubt [I’ll win]. If the fight goes 12 rounds, I’ve won every round anyway,” said Fury.

There wasn’t much more Fury could have done in the first fight in terms of preparation, and the way he fought. For all intents and purposes, Wilder was like a kid in a shooting gallery that night, throwing and missing huge right hands shots. Fury did well to dodge 99% of Wilder’s right hands, but in the end, he caught him and dropped him twice.

Tyson quite rightly believes that he’ll beat Wilder 100% if the fight goes 12 rounds. Last time they fought, Fury outboxed Wilder, and the only thing he had problems with was staying on his feet. Wilder dropped Fury in the 9th and 12th rounds with right hands.

“If the fight doesn’t go 12 rounds, then I’ve knocked him out. So either way, I see myself winning. There’s no losing in this. If it’s early, I’ve knocked him out. If it’s late, I’ve won on points. Either way, I’ll take it. I see him going down with a jab, a straight left. I think I put Schwarz down with a straight jab, and I’ve done many in the gym as well with that straight jab.

“So that’s the shot I’ll be looking for, knuckles down, straight jab to the nose,” Fury said about his jab that he wants to use against Wilder. “I am serious,” Fury said on his invitation to Andy Ruiz Jr. to come train with him. “He’s more than welcome to come down to the gym to do a bit whenever he wants.

“We train everyday at the Top Rank gym. If he wants to come down and workout with me side by side, no problem. He’s more than welcome,” said Fury.

It sounds like Fury has given up on the idea of knocking out Wilder with a right hand, and that’s a wise decision. Fury has never been able to muster much power on his sweeping right hands before.

He likely discovered in training camp that he couldn’t dent the chins of his sparring partners when he landed his rights with full power. Since Fury has an active jab, he’s got a much better shot at knocking Wilder out if his can be active with it. Fury threw a lot of triple jabs that were effective at keeping Wilder off of him.