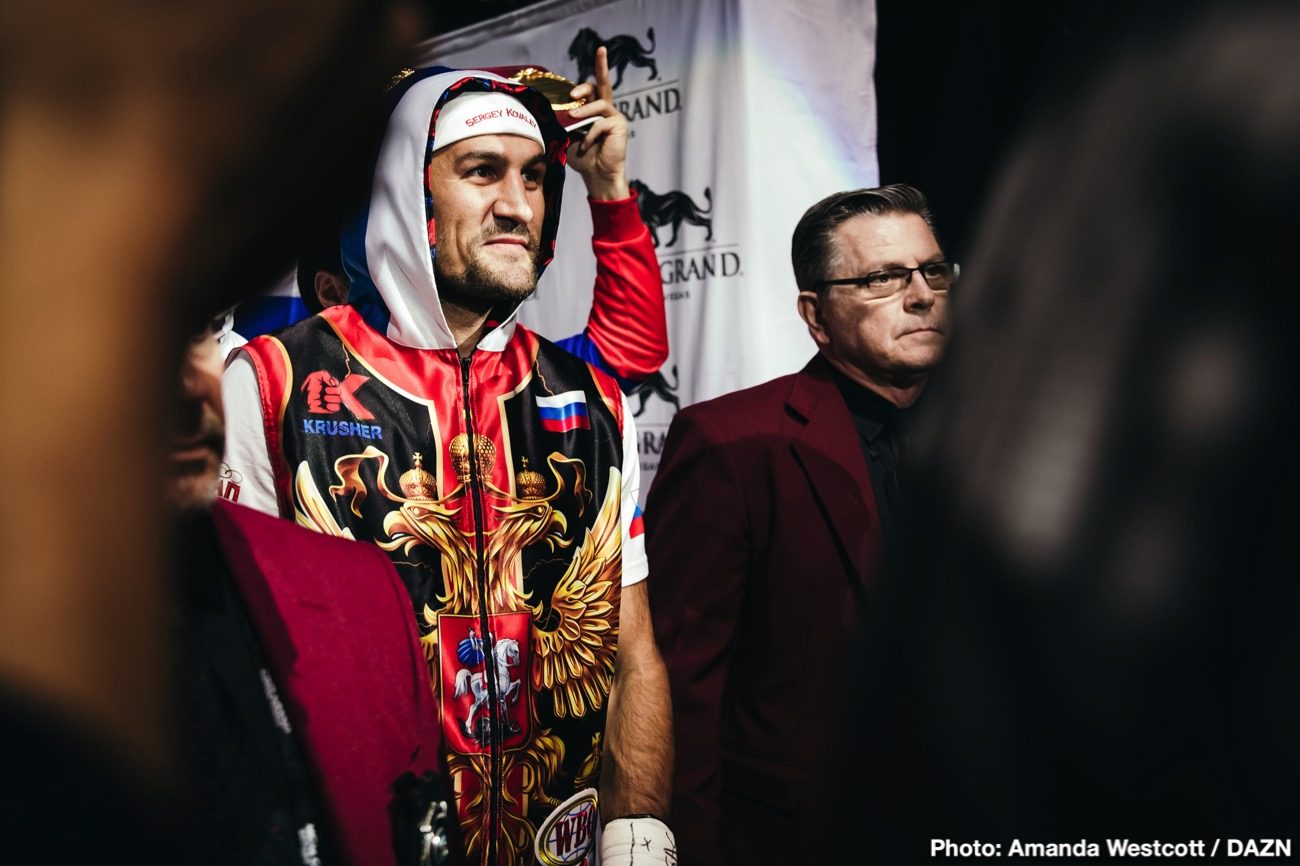 By Jim Maltzman: Sergey Kovalev was reportedly arrested for driving under the influence [DUI] early Monday morning in Los Angeles, California, according to ESPN.

The 36-year-old Kovalev, who has seen better days, was stopped at approximately 2:00 A.M. on Monday morning by the CHP, and promptly arrested with a charge of DUI. He was taken to Van Nuys in Los Angeles and booked.

This is just the latest of the legal problems the former IBF/WBA/WBO light heavyweight champion Kovalev (34-4-1, 29 KOs) has dealt with.

Kovalev lost his WBO 175-lb title by an 11th round knockout against Canelo Alvarez on November 2 in Las Vegas. A lot of boxing fans thought the fight looked strange, as Kovalev wasn’t attacking Canelo the way he normally does with his opponent. Compared to Kovalev’s last fight against Anthony Yarde, he looked like another person entirely.

He wasn’t sitting down on his shots and was fighting at a slow pace.  After the fight, a lot of fans on social media said they thought Kovalev took it easy on Canelo on purpose for whatever reason.

Kovalev did appear to fight hard in the 8th, and he had Canelo looking vulnerable. If you look at that round, it’s scary to think what a prime Kovalev would have done to Canelo. Even the Kovalev that fought Yarde would have been pure trouble for the small 5’8″ Canelo.

Kovalev lucked out in getting the big payday fight against Canelo, because there are a lot of arguably better fighters at 175 that the Mexican star could have chosen to fight. Of course, Canelo and his team may have purposefully selected Kovalev because he’d been looking faded and well past it.

It sounded weird when Canelo’s trainer Eddy Reynoso said that they picked Kovalev because he’s the best fighter at 175. Kovalev clearly wasn’t the best fighter at light heavyweight last year, and it was surprising Reynoso told the media that he saw him as the #1 guy in the weight class.

Kovalev is said to be moving up to cruiserweight to continue his career. He still doesn’t have a fight scheduled for that weight class, but it’ll be interesting to see if Kovalev can be successful up there.

The 6’2″ Kovalev is lean, and his punch resistance and stamina aren’t what it needs to be for him to do well at cruiserweight. But it may be his only shot at finding success at this point in his career because he likely wouldn’t do well if he were to face the top 175-lb fighters.

If Kovalev goes after WBC cruiserweight champion Ilunga Makabu, he’s got a chance of beating him, as he’s a badly flawed champion. That might be the only world champion at cruiserweight that Kovalev would have a shot at beating.

Although Kovalev isn’t much older than the 34-year-old Artur Beterbiev, there’s a world of difference between the level of where Artur is fighting and the way Kovalev is.