By Jeff Aronow: Oscar De La Hoya believes that Ryan Garcia is on course to become the next superstar for Golden Boy Promotions. De La Hoya says that all the champions at 135 are now chasing him trying to get a fight, and he feels that’s further proof that the 21-year-old Garcia (20-0, 17 KOs) is poised to make big waves in his young boxing career.

Last Friday night, Garcia dispatched Francisco Fonseca 25-3-2, 19 KOs) in a first-round knockout on February 14 at the Honda Center in Anaheim, California. This was supposed to be a test for ‘Kingry’ Garcia, but he quickly showed that Fonseca wasn’t in his league. Ryan connected with a left hook that knocked Fonseca out cold in putting him down flat on his back on the canvas.

Oscar has an ambitious plan for Ryan Garcia

De La Hoya says he has “a plan” to turn Ryan into a star. The plan starts next July when Garcia takes on former three-division world champion Jorge Linares (47-5, 29 KOs) at the Staples Center in Los Angeles.

If Ryan wins that fight, then he’ll move forward to take on Luke Campbell vs. Javier Fortuna. De La Hoya wants to match Ryan against Gervonta ‘Tank’ Davis in December, and then Devin Haney in 2021. If Ryan wins those 4 fights, he could be a superstar by the end of 2021.

It’s incredible to imagine Garcia being turned into a star so quickly, but the rigorous schedule that De La Hoya has for him, it’s the way to do it. If all fighters were willing to take on the best in consecutive fights the way Ryan is planning, boxing would have more stars.

Ryan Garcia being pursued by the champions

“I think Ryan Garcia at 135 and 140, nobody is going to stop him,” said De La Hoya to Fighthype. “He’s got the worth ethic, he’s got the speed and the power. But what I see in him is he refuses to lose, you know? I see it in his eyes. That’s something special that you sometimes see in a lot of fighters, and a lot of champions.

De La Hoya didn’t sound excited at learning that Jose Ramirez wants to fight Ryan, perhaps because of the experience factor. Ramirez is more experienced than Garcia and got better size and he’s more rugged.

Golden Boy has a plan for Ryan Garcia

“Look, we have a plan with Ryan, and that plan is so far working 100 percent,” said Oscar. “He keeps surprising and shocking the world. It’s no shock to me because I know what he’s capable of, but I strongly feel Ryan can be a superstar. I actually do,” said De La Hoya when asked if he sees similarities in his own self during his career and Ryan.

“I think the fact that he’s not only captivating the male fans but also attracting the masses with women. It’s very rare in boxing that you can attract women. I think Ryan is on the right path to superstardom.

“I guess we’re going to see once again arenas full of women, which is cool. It’s awesome. You haven’t seen that since probably I fought. I think there are parallels and comparisons, but look he’s writing his own story. He’s writing it beautifully, and we can’t wait until bigger and better things for him,” said De La Hoya on Ryan.

Oscar’s plan sounds good in theory but Ryan may have problems carrying out that vision. He not only could lose to the likes of Tank Davis and Devin Haney, but he might not be able to get the fights he needs.

For Garcia to win over the hardcore boxing fans, he’ll need to beat these guys:

“I didn’t catch the video, but I did hear about it,” said De La Hoya about Devin Haney and his father Bill Haney approaching Bernard Hopkins about them wanting to set up a fight with Ryan Garcia. “Look, everybody needs Ryan in his [135-lb] weight class. Ryan doesn’t need anybody. He doesn’t need a champion. Every champion needs Ryan, and that’s a great position to be in.

“Like I said before, and as Ryan said, he wants to fight the top guys,” De La Hoya said about Kingry Garcia. “This fight here was actually supposed to be a test,” said De La Hoya on the Ryan Garcia vs. Francisco Fonseca fight. “That was a real test because I believe Fonseca took Farmer and Davis.

“So the fact that he knocked him out in the first round with power, speed and precision were very telling for where Ryan is at,” said De La Hoya. “And Ryan is only getting better, and that is why champions want him now because he’s getting better. Once he gets to his peak when he’s 25 and 26, Jesus Lord. Oh man,” said De La Hoya in picturing Ryan being super talented when he’s in his mid-20s.

De La Hoya is wrong about Ryan Garcia NOT needing anybody to be a star. He does actually need to take on the best in order to impress the knowledgeable boxing fans and to interest the odds-makers in his fights. He’s got a lot of casual fans right now, but he needs to beat good fighters for him to get to the next level. 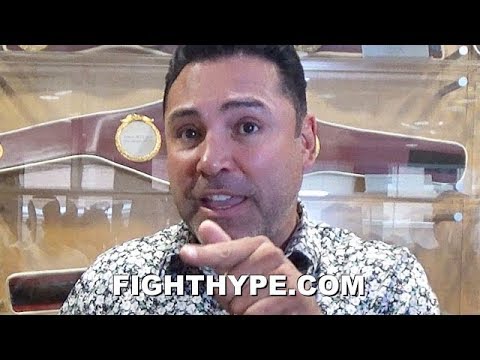