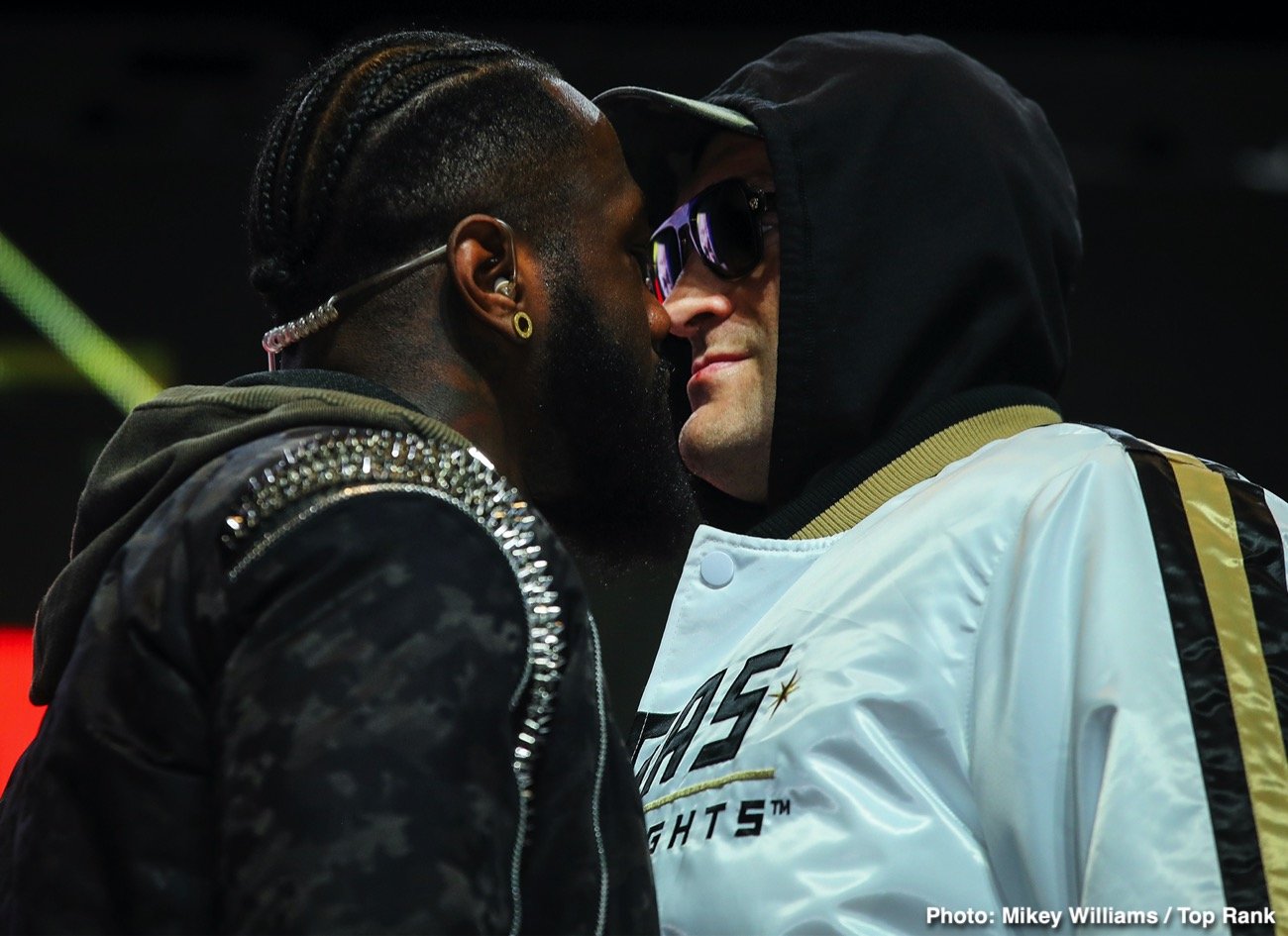 By Jim Maltzman: Deontay Wilder and Tyson Fury both trash-talked each other to the ultra-extreme during their final news conference on Wednesday for their rematch on Saturday at the MGM Grand in Las Vegas, Nevada. The press conference was difficult to watch at the end when Wilder upset Fury with some of his comments.

The two will be facing each other on Fox and ESPN pay-per-view in the States, and BT Sport in the UK. Wilder will be defending his WBC heavyweight title for the 11th time since winning the belt in 2015.

It appeared that Wilder (42-0-1, 41 KOs) genuinely upset Fury (29-0-1, 20 KOs) when he brought up how bad things had gotten for him during the dark period of his career when he gained a lot of weight and abusing substances. It didn’t look staged. Wilder mentioned that Fury wanted to kill himself when he was depressed. Wilder clearly went for the throat in taking his trash talk to that level. He sounded mean-spirited.

Fury seemed upset by Wilder’s decision to veer away from boxing to talk about his life outside of the ring. Fury didn’t look mentally strong when Wilder was giving it to him. Wilder sensed this, and he backed off. It looked like he realized that he’d struck a nerve with Fury by straying away from talking about boxing.

It’s easy to see what led up to this. Wilder didn’t like Fury telling the media last week that he introduced him to “big time” boxing by facing him in 2018.

That small seemingly offhand remark by Fury stuck in Wilder’s craw, and he reacted with a mix of anger and annoyance on Wednesday in turning the tables on Fury by saying that he helped rescue to bring him back to the sport when he gained a lot of weight and was no longer fighting.

That comment from Wilder was obviously not something Fury wanted to hear, as he got quiet and it didn’t seem to be in the same joyful mood from that point on.

Wilder: “He better not ever say he got me to big-time boxing, ever again, because I almost slapped him,” said Wilder to Fury during Wednesday’s press conference. “The one that introduced you to big-time boxing was me.

Fury: “I was the man that beat Wladimir Klitschko. I took over the division, not you. I brought you to big-time boxing.”

Fury: “You cherry-picked me”.

Wilder: “You were contemplating killing yourself because you didn’t want to live anymore, boy. I said, ‘Fury, you get your a– up. You get in that gym.’ I said, ‘I dare you to come back.’ I said, ‘You won’t come back,’ and what you did? Come on.”

Fury: “I came back and kicked your a– all over.”

At this point in the press conference, Fury looked and sound dispirited in trying to defend himself against Wilder’s barbs, and it didn’t work. It didn’t matter that Fury was hiding his eyes behind a pair of dark sunglasses, you could tell that he was glum.

When Fury attempted to boost himself back up with his comment about beating Wladimir Klitschko, it came across like he was trying to validate himself in Wilder’s and the fans’s eyes. One couldn’t help but feel sorry for Fury at that moment.

The moderator attempted to lend Fury a hand by changing the subjects at one point when Wilder was feminizing Fury. At that point, Fury stood up and looked angry. Wilder repeatedly told  Fury to sit down, but he was having none of it. He was upset and wasn’t going to be ordered around by Wilder.

Wilder: “How many times did you dream about the 12th round, because that’s the only thing they got to promote. Hello, can you talk? Cat got your tongue. I got a sixth sense. I know what nervous energy is and what it looks like, and what it smells like p—–.”

Fury: “Terrible [when asked how his cut is doing]. It’s come open 4 times in training camp, and it’s come open with little flicks. So you shouldn’t have any problems opening it up, should you? The biggest puncher that ever lived. The so-called biggest puncher, but couldn’t even keep a man down in the 12th round, could you?”

“I’m going to see if he can get up off the floor. I don’t think he’s got the bottle. He ain’t got it. He’s an un-tough fighter, he’s a bully fighter, and when a bully gets bullied, he folds every single time. Wilder, this is a big act for him.

“He’s very nervous underneath. I can see his heartbeat pounding out of his chest. He’s terrified. He’s nervous as hell. He doesn’t know what to expect. You’re nothing but a skinny little p—–.”

Fury: “That’s what you are. You ain’t nothing. You’re not scary, and you’re not terrifying.”

The way that Fury reacted today from Wilder’s trash-talking, he seems like he lacks the self-confidence this time around to do the job. He’s not in a great place like he was the first time they fought. It’s like a completely different Fury this time, and he doesn’t seem like he’s got that energy and motivation that he had for the first time.

Unfortunately, the only chance Fury has of beating Wilder is for him to be the same guy that out-smarted him last time. Fury had fun toying with Wilder, and getting the better of him throughout their fight. That version of Tyson Fury seems to be missing this time around. His disposition now is that of a guy that’s just going through the motions and playing out his string. 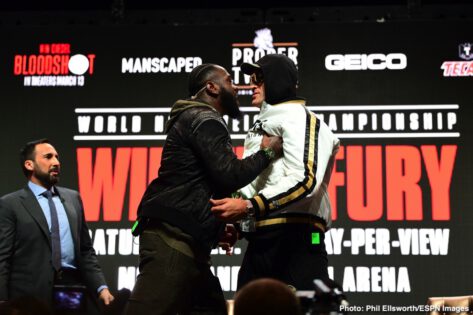 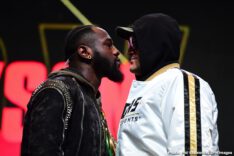 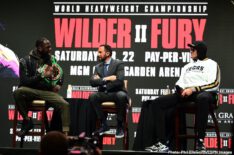 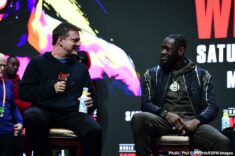 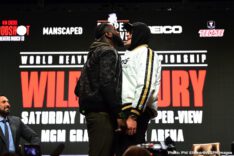 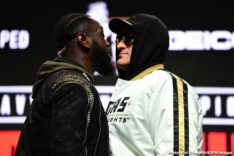 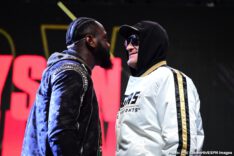 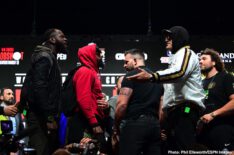 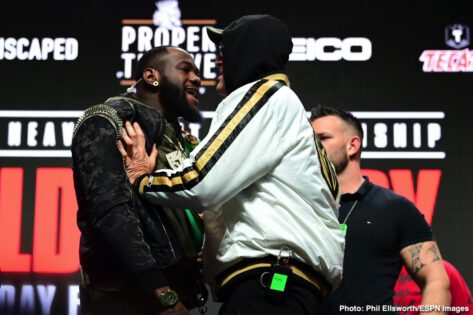 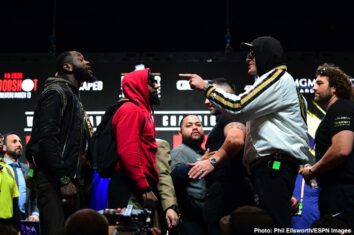 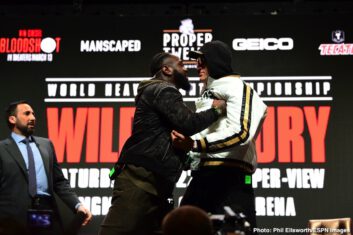