‘NOBODY cares about Anthony Joshua in America’ – Bob Arum

Joshua (23-1, 21 KOs) ran from Ruiz Jr. (33-2, 22 KOs) in their rematch on December 7, according to Arum. The way that Joshua won the Ruiz Jr. rematch didn’t impress a lot of boxing fans, who saw him using the same spoiling fighting style that Wladimir Klitschko utilized during his career.

Arum says Joshua will be beaten by Kubrat Pulev when the two of them face each other this summer in June. From there, Arum will match Pulev (28-1, 14 KOs) against the Tyson Fury vs. Deontay Wilder trilogy fight winner.

“In America, nobody cares about him,” said Arum to IFL TV on Anthony Joshua. “Any fighter that gets beaten by Andy Ruiz, and gets knocked down by Ruiz, is not an elite fighter. I mean, let’s be honest about it. I had Andy Ruiz…and he didn’t knock out the majority of the guys that we put him with.

“Most of them were not top-flight heavyweights. And Anthony Joshua gets knocked out by Andy Ruiz, what does that say about him? If Ruiz fought Tyson Fury or Deontay Wilder, would you give Andy Ruiz any chance against those two guys? No. And he knocked out Anthony Joshua, and then fought him [Ruiz] in a rematch and ran like a p—-.

“Listen to what I’m telling you. Anthony Joshua’s next fight is with Kubrat Pulev, who will knock Anthony Joshua out. If Joshua is still standing, of course, I would do it,” said Arum when asked if he would match Fury against Joshua if the two heavyweights win all their fights in 2020.

A lot of American boxing fans would agree with Arum about his view that Joshua ran from Ruiz Jr. in their rematch last December. It was an ugly way for Joshua to beat Ruiz because he was holding and moving the entire fight.

U.S boxing fans like to see fighters punch it out in center ring, and they don’t enjoy watching guys that focus exclusively on the defensive side of their games. Floyd Mayweather Jr. was an exception to the rule, given that he had blazing hand speed, and his personality outside of the ring was appealing to fans.

“What does a face-off have anything to do about a boxing match?” said Arum when asked about the Deontay Wilder vs. Tyson Fury 2 face-off being banned by the Nevada State Athletic Commission.

“We saw them do a face-off before the press conference, and maybe without bad intent, they pushed each other. The problem is, they’re not actors, so they have emotions, it can get out of hand, and somebody can get hurt. It sends the wrong image that fighters can’t control themselves, and they’re nothing but thugs.

“You don’t see that in football. In football at a press conference, they don’t push and shove each other, why should boxers?” said Arum on Wilder-Fury 2 face-off ban. “I don’t think that a face-off [is important]. What do you want to do, kiss each other? What do the frick do you want with a face-off? It’s ludicrous,” said Arum.

Bob brings up a good point about the face-off ban by the Nevada State Athletic Commission for the Wilder vs. Fury II weigh-in isn’t important. After the pushing and shoving that went on between Deontay (42-0-1, 41 KOs) and Fury (29-0-1, 20 KOs) at the final news conference on Wednesday, it’s wise that the Commission banned the face-off for the weigh-in.

Moving forward into the future, the promoters need to think about having row security personnel stand between the fighters to avoid the shoving that has become a pre-fight ritual.

“No, I think he’s going to try and rough up Wilder early on,” said Arum when asked if Fury can knockout Wilder. “I give him a shot to take out Wilder early on in middle rounds, 7th or 8th rounds. But it’s a good strategy on his part because Wilder has a big punch and the way to minimize the threat of that punch is to weaken that fighter early on so that punch doesn’t have the same impact,” said Arum.

Pushing, shoving and mauling by Fury may not work to tire Wilder out the way Arum thinks it will. The 6’7″ Wilder gets his power from his long frame, not from his muscles. Even when Wilder is tired, he’s still able to generate huge power because of his frame. As a result, Wilder will likely remain dangerous even if Fury attempts to tire him with grappling with him on the inside. If anything, it’ll tire Fury out, and make him susceptible to getting knocked out when he’s plodding forward getting ready to wrap Wilder in a bear-hug. 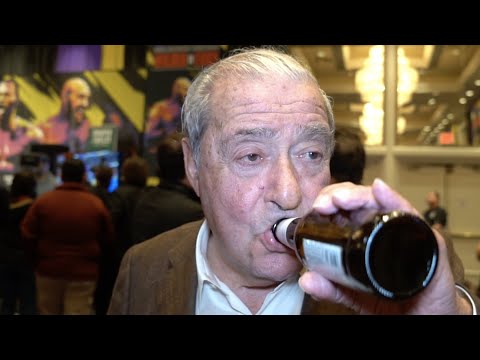 Emanuel Navarrete: ‘I want to be a global superstar’ »