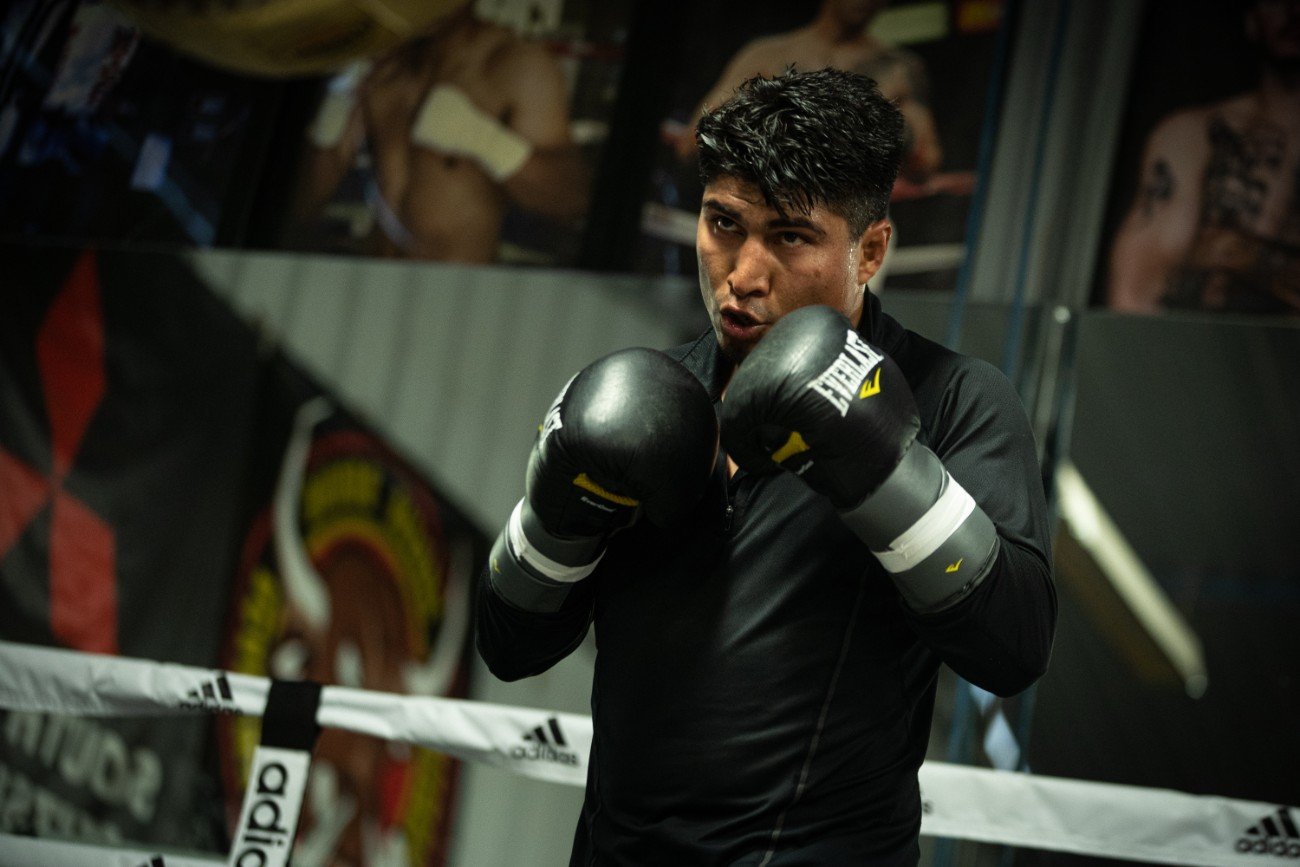 By Dan Ambrose: Mikey Garcia still seems upset and disappointed about his last performance in losing a lopsided 12 round unanimous decision to Errol Spence Jr. last March in Arlington, Texas. Mikey is attributing his defeat to Spence on his decision to “BULK UP” too much, and too soon. He says he weighed 154 lbs on the night of the fight with Errol, and he wishes he’d been lighter.

In two weeks from now, Mikey will be returning from a 11-month layoff to face Jessie Vargas for the WBC Diamond welterweight title on DAZN on February 29 at The Ford Center at The Star, in Frisco, Texas. Mikey (39-1, 30 KOs) is going to need to fight a lot better against Vargas than he did with Spence if he doesn’t want to get embarrassed for a second consecutive time.

There’s a lot more riding on this fight than when he fought Spence, as a title shot against WBA Super World welterweight champion Manny Pacquiao is looming. A victory for Mikey, 31, could put him in the driver’s seat to face Pacquiao (62-7-2, 39 KOs) in what would likely be the biggest payday of his career.

Mikey is said to be getting $7 million for his fight against Vargas on February 29, which isn’t chicken-feed. That’s a lot of money that Mikey is getting to be fighting what essentially is an inactive fighter, whose career tanked four years ago in 2016.

Mikey is still questioning his decision to bulk up as much as he did. Mikey feels that he should have come in lighter for the fight so that he could have had more hand-speed.

Bulking up for Spence fight was a mistake – Mikey

“I might have made a mistake doing it too soon in a 10 week camp, trying to bulk up,” said Mikey to Figthype in looking back at his fight last year against Spence. “Maybe that was a mistake. I think I walked into the ring at 154 or something like that, and I think that might have been a mistake. You know, I think I should have been maybe a little bit lighter so I could move better, and not be sluggish and tired.

“Maybe that was a mistake, but I can’t say that’s what happened, and caused me to lose the fight,” said Mikey on his defeat to Spence. “It’s one of those things. You learn, and move on. 160,” said Mikey when asked how much he weighs now. “I was able to keep the weight all this time, and I feel like I should be able to do better.

“I’m more adjusted to the weight than before when I was trying to bulk up,” said Mikey. “I actually went up even higher at 165 during the time I was bulking up [for the Spence] fight. Well, maybe that was a mistake, and maybe that made me slow. Adding so much muscle , it might have made me slow. It happens, s—. Just move on, and learn, and try to do better next time,” said Garcia.

Mikey is on the right path in admitting that it was a blunder on his part to bulk up so much for the Spence fight, but he didn’t have much choice. If Mikey had stayed light in weighing in the 140s, Spence would have probably crushed him without even trying.

Mikey: I wasn’t able to do ANYTHING against Spence

“I don’t expect that I’ll need to have a [weight] cut [for the Vargas fight] of 8 or 12 lbs,” said Garcia on his fight with Vargas. “I’m not going to be doing that. The weight just comes off as I’m training. I hope so, and I wish him well,” said Mikey when asked if he thinks Spence will be able to come back from his car crash.

“Hopefully he can come back, and be just as good as he was before,” continued Mikey on Errol. “We can’t say until we see him back. He’s good, and is very skilled, and very good at judging the distance,” said Mikey in responding to a question of ‘how good was Spence?’ I think he had great timing, footwork and defense.

“I always told everybody that he reminds me of myself, because he does everything very well,” said Garcia of Spence. “It’s nothing flashy, nothing crazy, and nothing out of this world, but everything very, very well. His fundamentals are on point, and he pulled it off perfectly that night. I just wasn’t able to do anything,” said Mikey in voicing his frustration at losing to Spence.

Taking the fight without being tested first at 147 was a mistake for Mikey. More than the weight, the lack of experience for Mikey at welterweight is what doomed him against Spence.

Garcia vs. Vargas to fight for WBC Diamond belt

If Mikey beats Vargas, it’ll make him a five division world champion. However, whether the WBC Diamond welterweight belt counts as a true world title strap or not is debatable.

The WBC Diamond title is an honorary championship strap, given to the winner of fights that they feel are major history level matches between elite level fighters.

While Mikey fits that description with him having captured world titles in 4 weight classes, Vargas comes up well short of that. Although he’s won world titles in 2 weight classes at 140 and 147, he beat Khabib Allakhverdiev and Sadam Ali to win those titles. Those two aren’t exactly elite level fighters.

It is one of the titles that the World Boxing Council puts up for big fights, so technically it’s considered a world title, albeit an honorary one.

Obviously, a lot of boxing fans won’t consider Mikey a true world champion at 147 if he beats Vargas to win the WBC Diamond belt. It’s one of the sanctioning bodies’ titles that haven’t been in existence for a long period of time. It’s only been around for 11 years.

The first time the WBC Diamond strap was up for grabs was November 14, 2009 in the Manny Pacquiao vs. Miguel Cotto fight. Pacquiao stopped Cotto in the 12th round to win the Diamond belt. That fight deserved to have the WBC Diamond title on the line. I don’t know if you can say that in the Mikey vs. Vargas clash.

Jessie Vargas hasn been struggling for wins since 2016

Vargas’ last real win was four years ago in 2016 when he beat Sadam Ali to win the vacant WBO 147-lb title. Since then, Vargas’ only 2 victories have come against 40-year-old former lightweight champion Humberto Soto at junior middleweight in 2019, and journeyman Aaron Herrera in 2017. Vargas fought to a pair of 12 round draws against Adrien Broner and Thomas Dulorme in 2018.

Vargas is a good tune-up level opponent for Mikey, and you can see why Matchroom Boxing promoter Eddie Hearn chose to make this fight. Mikey badly needs a win over a recognizable welterweight in order to sell him as an opponent for Pacquiao in April or May.