Kell Brook on Errol Spence: ‘He KNOWS I would beat him’

By Charles Brun: Kell Brook made easy work of his hapless comeback opponent Mark DeLuca last Saturday night in stopping in the 7th round in a hopelessly one-sided mismatch at the FlyDSA Arena in Sheffield, England.

The win for Brook seemed to have worked wonders for his self-confidence, as he boldly predicted after the contest that he’ll beat Errol Spence Jr. and become a two-division world champion in 2020. Whether either of those things happen this year is unknown.

Brook’s promoter Eddie Hearn will need to do a lot of wheeling and dealing this year. Right now, Hearn seems to be eager to put Brook in with Liam Smith, which probably does nothing for him. It’s more of a domestic level srap at best.

Brook: I would beat Spence and he KNOWS it

“I don’t know why he [said that,” said Brook to Behind The Gloves when told that Errol Spence Jr. Tweeted that he wants Brook to stop mentioning his name. “He knows and I know what the situation was with that fight. Me at 100%, I want him. I would love to have a rematch.

“I would beat the guy, and he knows that as well,” said Brook about his desire to face Errol once more “He mentions me. Someone gave me inside information that he knows in training camp I was ill so many times. He knows with me at 100 percent, he’s going to have big problems,” said Brook about Spence.

Brook insists that with him now at “100 percent,” he beats Spence. However, with Spence coming off of a car crash, Brook is safe to make bold predictions about how a rematch with him would turn out without worry of him calling his bluff.

Liam Smith likely next for Brook

The more realistic option for Brook, which he doesn’t seem excited about, is him facing former WBO junior middleweight champion Liam Smith in a possible title eliminator.

Brook’s promoter Eddie Hearn says he’s going to TRY and have the World Boxing Organization give the green light to a fight between him and Liam be a final WBO title eliminator. The winner would then be the mandatory for WBO champion Patrick Teixeira.

That’s probably a bad idea for Brook, because Teixeira will be getting his mandatory defense out of the way for 2020 against Brian Castano in his next fight. Provided Teixeira beats Castano, he’ll likely make a voluntary defense of his WBO title in the second half of 2020 rather than fight another mandatory.

Brook needs to be aware of that before he invests time and effort into facing Liam, who won’t be an easy fight for him. It’s a winnable fight for Brook, but it won’t be easy.

The fight was built up to be a competitive fight by Brook’s Matchroom Boxing promoter Eddie Hearn, but it became immediately clear in the first 15 seconds of the bout that DeLuca had very little test had no shot at winning aside from a freak injury for Kell.

Two years ago, DeLuca was beaten by journeyman Walter Wright (17-8, 8 KOs). That fight was a hint of what we could expect from DeLuca as the opponent for Brook’s comeback last Saturday.

Hopefully for Brook’s sake, Hearn doesn’t match him against too many more DeLuca level opponents for him, as he’s already faced a lot of similar fighters during his career.

The first 9 years of Brook’s career from 2004 to 2013 was hm facing limited opposition. In 2014, Brook stepped it up against his first A-level fighter in Shawn Porter, and he beat him by a close 12 round majority decision.

Brook used the punch & grab technique of beating Porter. That’s a style in which a fighter throws a punch, and then immediately grabs his opponent to keep them from throwing anything back.

Brook went one step further using that style by just grabbing Porter without throwing anything just so that he wouldn’t land shots. It was one of those fights that could have resulted in Brook losing points for his excessive holding, but the referee opted not to do that.

“It was a clinical finish. He couldn’t continue, and he’d never been stopped like that before,” said Brook to Behind The Gloves on his win over little known DeLuca. “I’m on to bigger and better things now. The initial goal was to look good and stop the guy.

‘I knew with a guy like that it wasn’t going to be easy,” said Brook on DeLuca. “I knew I had to be patient, and take my time. I knew I had to chip away, chip away, and break him down. He’s got a lion heart. When someone waves you on, they’re hurt. Anyone that smiles in there when they get hit with a shot, they know about that shot.

“I’ve had 41 fights, and I know that when someone smiles and waves me on, they’re hurt. It’s a mind game in there like a chess-match.  And it’s not just about being the strongest. It’s about being smart in there, and boxing clever,” said Brook.

Hearn can possibly get Brook a world title shot WITHOUT him needing to fight Liam Smith in a title eliminator. However, if Hearn has mind made up that he absolutely wants Brook to fight Smith next, then it’ll be up to him whether he agrees to it. Brook needs to have his eyes open though, because it’s pretty clear that Hearn wants him to fight Liam.

Unfortunately, Brook beating Liam still won’t guarantee him a title shot in 2020 against WBO champion Teixeira. At best, Brook will likely need to wait 12 to 14 months before he gets a title shot against, and that’s if he beats Smith.

Hearn can likely beat Brook a world title shot long before that against WBC champion Jermell Charlo or IBF/WBA champ Jeison Rosario. Without question, those are arguably much tougher fights for Brook, but if he believes he’s the best at 154, he’ll get a chance to prove it against one of those champions.

Hearn can probably set Brook up with a title shot in 2020, but it’s unlikely that it’ll be against Rosario. He’s coming off of a win over Julian ‘J-Rock Williams,’ and he had a rematch clause in the contract. J-Rock will likely execute the rematch clause to force a second fight with Rosario in 2020.

“If it’s in the plan, it’s in the plan, but I’m in the stage where I’m hunting for a world title,” said Brook when asked if he’ll be fighting Liam Smith next. “We have to sit down and see what the figures are, and what’s on the table. If it makes business sense, then that’s the fight that will happen.

“It seems to be, you know?” said Brook when asked if the Amir Khan fight is dead. “I never mention his name, but he knows exactly where I am. I’m an active fighter, I just boxed tonight, and I’m ready to box in 12 weeks. If he wants to fight me in 12 weeks, I’m ready,” said Brook in sending a message to Khan.

Brook vs. Smith isn’t a big fight in the UK or anywhere. Liam has already been beaten twice, and he’s done little since his loss to Jaime Munguia in 2018. He’s one of those guys who might be more trouble than he’s worth for Brook. 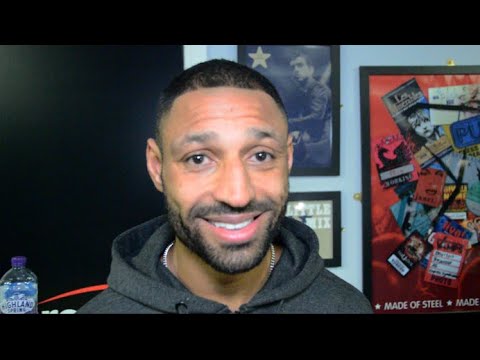 Brook should think about trying to move down to 147 to challenge one of the champions in that division. His chances of getting a world title shot in 2020 are likely better going after one of the welterweight champions than at 154.