Hopkins: Wilder will have KILLER instinct for Fury rematch 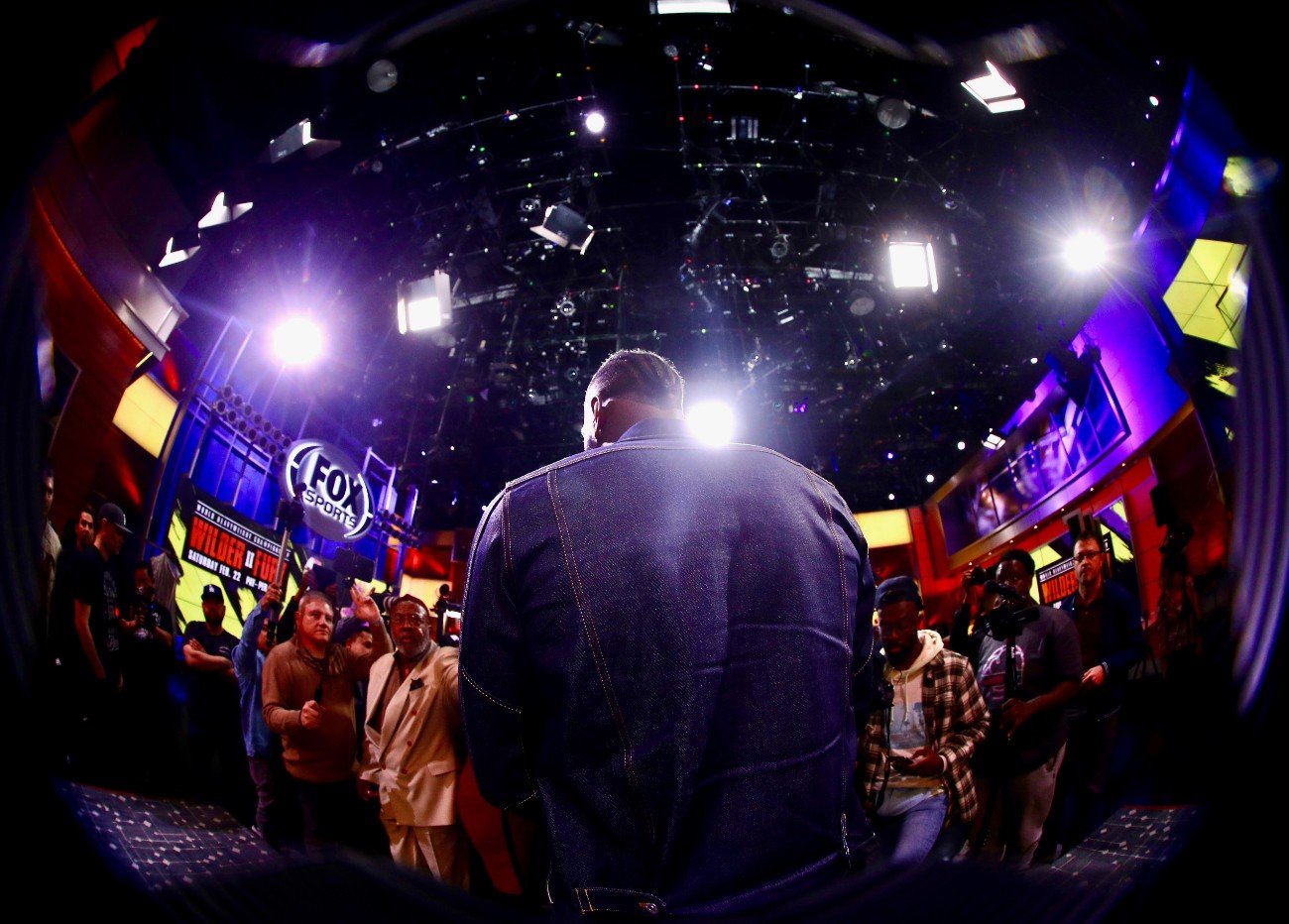 By Jim Maltzman: Bernard ‘B-Hop’ Hopkins is predicting a dominating performance from WBC heavyweight champion Deontay ‘The Bronze Bomber’ Wilder in his rematch with Tyson Fury in less than three weeks from now on February 22.

Hopkins says Wilder (42-0-1, 41 KOs) will have the “Killer instinct” when he faces the unbeaten Fury (29-0-1, 20 KOs) at the MGM Grand in Las Vegas, Nevada. As far as Hopkins’ is concerned, Fury gained a victory of sorts just by getting up and beating the count in the 12th after being dropped by Wilder in their first fight on December 1, 2018.

“If you look at Fury, where is the credit other than showing ability and heart not to get discouraged by barely beating the count,” said Hopkins in discussing the first Wilder-Fury fight. “Other than that, it’s a victory for Fury that he survived, and Wilder slacked up in the championship later rounds. Take that away, Wilder was winning the fight pretty easy to me.

“What can happen the second fight after knowing you’ve been in with a guy?” asked Hopkins. “It’s normally not the same. It’ll be one-sided, and it’ll be very calculated on Wilder’s [side]. Yes,” said Hopkins when asked if he felt that Wilder won the first fight against Fury.

Hopkins had the KO artist Wilder beating Fury last time in front of a large crowd of 17,698 at the Staples Center in Los Angeles, California. B-Hop felt he was the better fighter of the two.

The punch stats favored Fury slightly. Tyson connected on 84 punches of 327 shots for a 26% connect rate. Wilder landed 71 shots of 430 for 17%. Fury landed slightly more punches, but Wilder’s shots were MUCH harder.

Although a lot of boxing fans disagree, there’s no disputing the fact that the punch stats were almost even in each round, and that the 6’7″ Wilder landed the much harder shots. So just going by which guy landed with more authority, you can understand why Hopkins thought Wilder deserved the win.

“I know you probably think differently, because we don’t really disagree on many things,” continued Hopkins on Wilder-Fury 2 rematch. “Listen, if you look at the first [Wilder vs. Fury] fight, and look at it again, we still have time. You’re going to see Wilder with the killer instinct and finishing, which he knew he didn’t do the first time,” said Hopkins.

“Someone out there with a scorecard believed that he [Fury] deserved [to be given a draw] in barely beating the count.  He didn’t take Wilder down two or three times to even it up, and they felt he [Fury] still deserved to have a draw,” said Hopkins.

“That was the safest way out inside and outside for Fury,” said Hopkins about Fury getting a victory with the judges scoring his fight with Wilder a draw. “That was a victory for Fury, and that’s why we’re talking about it. He’s a great salesman, one of the best. I think it’s Ali and then him. To me, I don’t think he’s [Fury] the most talented fighter or the ‘great white hope.’ I think Gerry Cooney was a little bit better. ‘The Gentleman,’ yeah,” said Hopkins.

It makes sense to predict that Wilder will have the “KILLER instinct” in the second fight with Fury. The question is whether Fury can take Wilder’s shots for the entire fight without getting knocked down or stopped.

“I will not do interviews for a year,” said Hopkins when asked what happens if Fury beats Wilder. “Anyone knows me, it’s very hard for me to keep my mouth shut. To make that official, there’s going to be a lot of duct tape right beside everywhere I sit,” said Hopkins.

B-Hop is having a little bit of fun with his predictions, but there are a lot of people that are picking Wilder to win this fight. Wilder has looked like the better fighter in his last two contests compared to Fury, and he’s faced the better opposition.

In Fury’s two fights since his match with Wilder, he’s beaten Tom Schwarz and Otto Wallin. Those were considered gimmees for Fury. For his part, Deontay beat Luis Ortiz and Dominic Breazeale by knockout.

“I think Joshua will take him into deep waters, and I think the size will play a factor early for both guys,” said Hopkins when asked who wins in a fight between Joshua and Fury? “Both guys with minimum speed for their height, but I think Joshua is more fundamentally sound, and more of a technician than Fury, who is skillful for a big guy, but not overly skillful.

“I like Joshua between 10 and 11 rounds of a gruelling heavyweight, Ron Lyles-George ‘The Great’ Foreman,” said Hopkins on his Joshua vs. Fury prediction.

There is a good chance that Joshua out-boxes, and potentially stops Fury. We don’t know where Fury is going to be in terms of his chin after his rematch with Wilder on February 22. If Wilder knocks Fury out cold like he did in their first fight, it could make him prone to suffering knockouts in his future fights.

Fury will try and make Joshua miss with his shots, but he’s not going to be able to get out of the way of everything he throws. Joshua has a good jab, and he’ll be able to reach Fury with that shot all night. In comparison, Wilder has a weak jab, and he rarely uses it. Joshua will give Fury something to think about with his jab if they ever fight each other.

“That would be an amazing historic fight that would sellout an arena of 80 to 100,000 people,” said Hopkins on a potential future unification fight between Anthony Joshua and Deontay Wilder. “Where do you put that fight? Houston in a baseball or football field? That would be a major fight that we didn’t see in decades.

“If you look at decades of heavyweight champions, you’ve got to put [Riddick] Bowe in there,” said Hopkins. “You’ve got to put those guys in there. That would be a fight that I would see. A prediction on that fight would be hard to predict.

Even right now if you would say to me, ‘Bernard, who do you think would win that fight between Wilder and Joshua? I would have to get back to you on that,” said Hopkins.

Wilder-Joshua will be a historic fight if it ever happens. Some boxing fans believe Joshua vs. Fury will be bigger than Wilder-Joshua, but that might be wishful thinking.

Fury isn’t a big enough name in the U.S to attract the American fans to want to see a Joshua-Fury fight in large numbers. Joshua vs. Fury will be a domestic level fight for UK boxing fans, but it won’t be a big hit in the U.S.

Joshua and Fury could wind up smaller than expectations if Wilder knocks out the ‘Gypsy King’ on February 22.

Joshua learned not to overlook his opponents

“He learned from his mistake that he will be the fighter that he was in the last fight he fought in his rematch until his career ends,” said Hopkins on what Joshua learned from his fights with Andy Ruiz. “With a mentality like that, if you ever know that you could have done better, and Joshua spoke about it, then you will never fall in that trap again no matter who you fight.

“No excuse. He [Joshua] didn’t take him lightly,” said Hopkins on Joshua’s first fight with Ruiz in June 2019. “He thought he was better that night, but he had to prove it. You live and you learn, and I believe from my conversations from the last fight.

“Knowing now that people are going to be microscoping everything he does, I want to see that he learned a valuable lesson,” said Hopkins on Joshua. “Everybody is dangerous, and you fight everybody like they’re champions, and expect that they can hurt you too. That is key for any fighter out there or for any athlete. If you underestimate your opponent, you’ve already given away the first five rounds,” said Hopkins.

Joshua didn’t overlook Ruiz in their first fight. He just got caught up in thinking he could knock him out after he dropped him in the 3rd round last June. If Joshua were in a similar situation against Ruiz or any fighter, he would do the same thing again.


« Murat Gassiev vs. Jerry Forrest on Feb.29 on DAZN in Frisco, TX