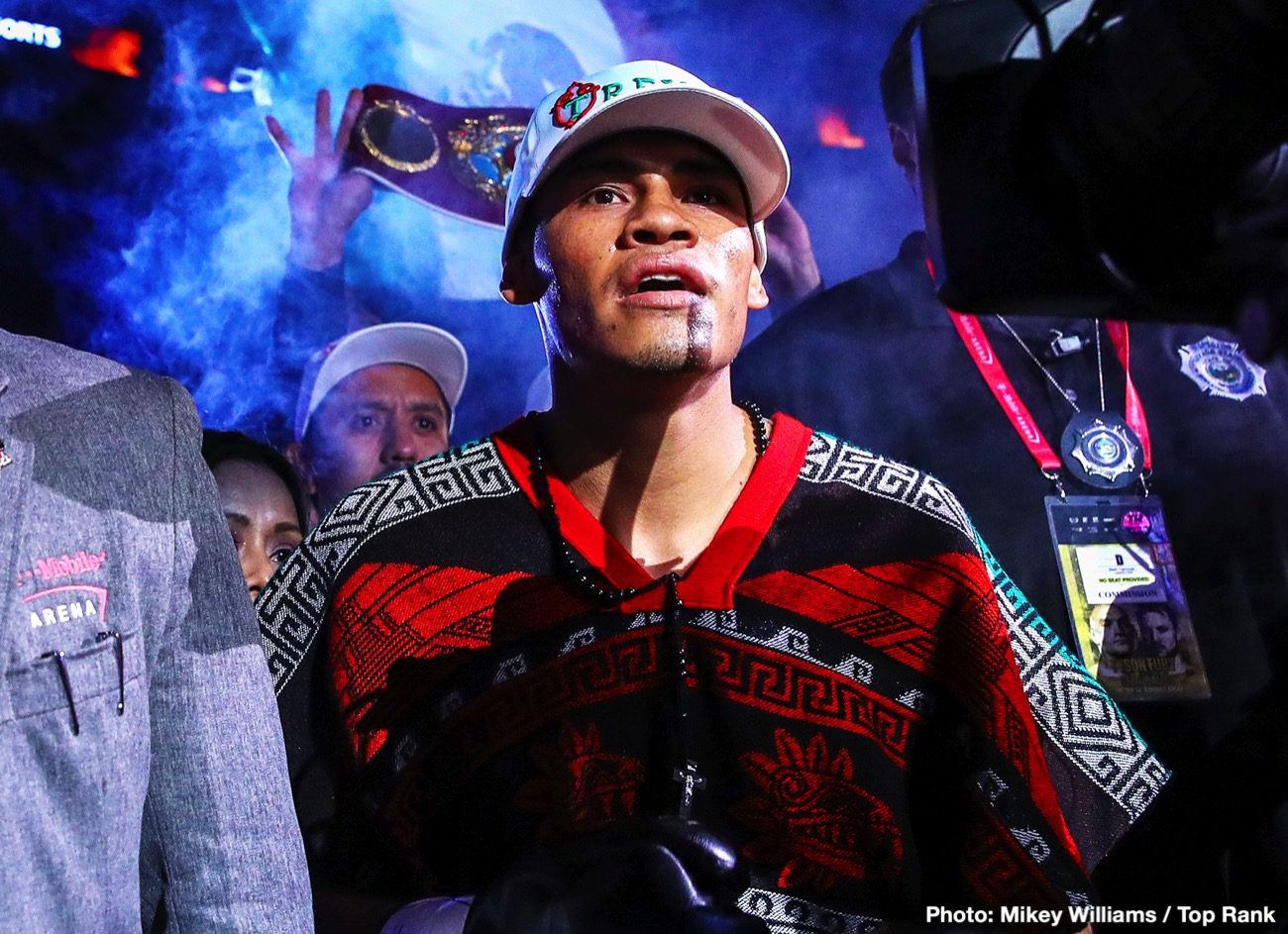 Akhmadaliev, 25, is a good fighter, but he just barely edged IBF/WBA 122-lb champion Danny Roman (27-3-1, 10 KOs) by a 12 round split decision last month on January 30 in Miami, Florida. Roman didn’t start pressuring Akhmadaliev hard until the championship rounds, and by then, he’d fallen behind too far to make up ground.

Akhmadaliev would be at a size and power disadvantage against Navarrete

Navarrete, 5’7″, would have a big height and reach advantage over the 5’5″ Akhmadaliev and he would be pressing him the entire time. There’s a very good chance that Akhmadaliev loses to Navarrete by knockout. It would be a risk for Hearn to let Akhmadaliev fight Navarrete so soon after he just captured the IBF/WBA titles from Roman last January.

Roman wants a rematch, and that fight would generate a lot of interest from U.S boxing fans. Akhmadaliev is a good fighter, but Roman showed that he’s vulnerable when being pressured. Navarrete wouldn’t make the same mistake that Roman did by failing to go after Akhmadaliev hard in the early rounds.

“Yes, on ESPN anywhere you want it,” said Hearn to Boxing Social when asked if he wants to make a unification fight between Murodjon Akhmadaliev and Emanuel Navarrete. “I want to take Akhmadaliev to Uzbekistan to defend with [Israil] Madrimov and [Murat] Gassiev, and it would be incredible. Yes, Navarrete, PLEASE, anytime. Akhmadaliev is ready to fight anybody.

Additionally, former WBC bantamweight champion Luis Nery (30-0, 24 KOs) is ranked #2 with the WBA, and he’d obviously be someone that would be an interesting option for Akhmadaliev. Nery is fighting next month against unbeaten Aaron Alameda on March 28 in Las Vegas.

Navarrete defends against Santisima on Feb.22

Navarrete (30-1, 26 KOs) will be defending his WBO super bantamweight title this month against Jeo Santisima (19-2, 16 KOs) on February 22 on the Deontay Wilder vs. Tyson Fury undercard at the MGM Grand in Las Vegas. This will be the 25-year-old Navarrete’s fifth defense of his WBO belt that he won in 2018 in beating Isaac Dogboe by a 12 round unanimous decision.

Navarrete has been a busy champion in defending his WBO belt 4 times in 2019. His fight against Santisima will be his first fight this year, but he’s likely to fight 4 times in 2020 before the year is up. It would be ideal if one of those fights for Navarrete is a unification match against Akhmadaliev, but that’ll be up to Hearn to decide. He may choose to go in another direction with Akhmadaliev given how great Navarrete is looking right now.

For the time being, Hearn plans on bringing Akhmadaliev (8-0, 6 KOs) back this summer in card in Uzbekistan. This is the 2016 Olympian Akhmadaliev’s original home country.

Hearn believes that Akhmadaliev’s homecoming fight in Uzbekistan will bring in 60,000 fans, and he’s obviously excited at the possibility of him selling that many tickets. That would like what Anthony Joshua is doing in the UK. Hearn doesn’t have anyone besides Joshua that can sell that many tickets until now.