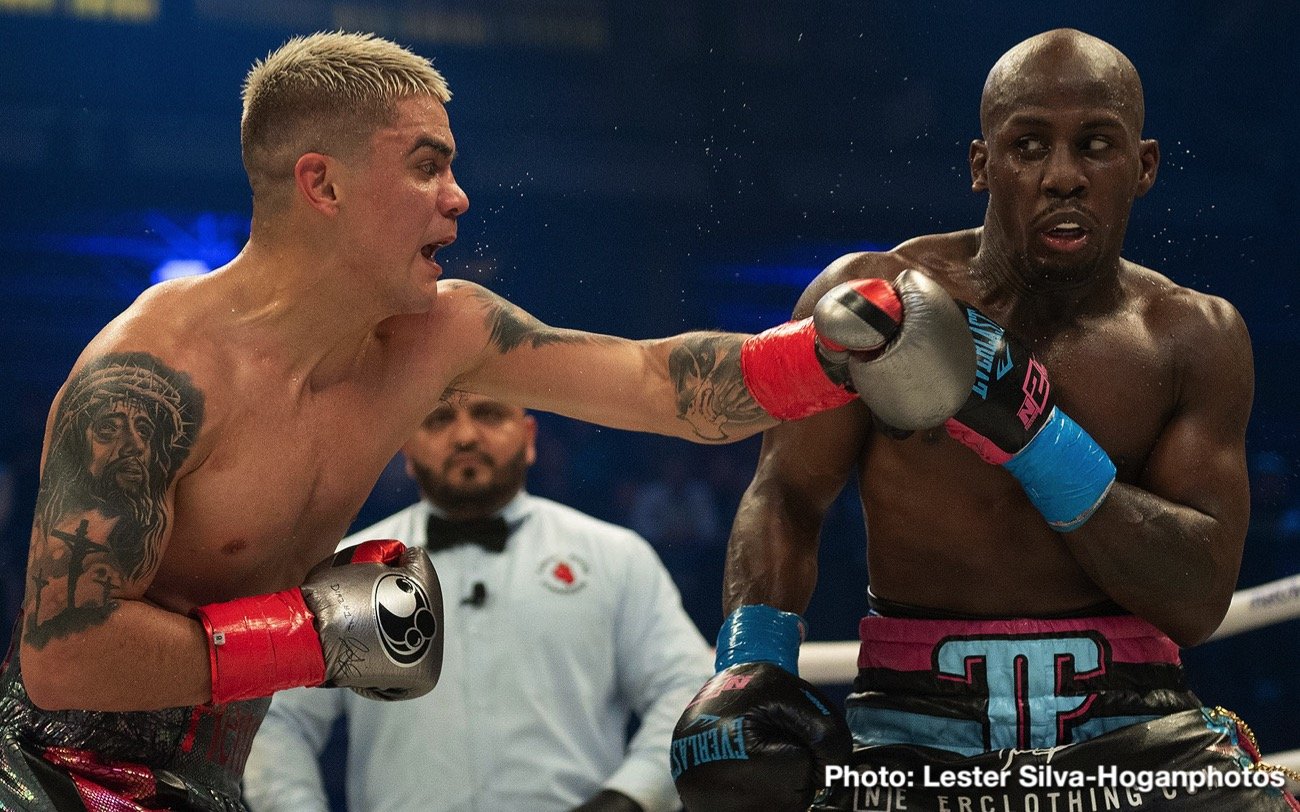 With Farmer, 29, losing to Jo Jo Diaz, Tank Davis doesn’t need to worry about being pressured by Tevin and the boxing public to make a fight between them. Davis, 25, is off the hook, and can continue to ignore Farmer without facing him. Fans would still like to see Farmer and Gervonta fight each other, but it’s not going to happen unless Tevin can avenge his loss to Diaz Jr. first.

There’s been bad blood between Davis and Farmer (30-5-1, 6 KOs) for some time. Farmer has wanted to fight Davis, but his promoters at Mayweather Promotions haven’t setup that fight. So instead of Davis facing Farmer, he’s getting a second hand win with Diaz Jr. doing the job for him.

It’s too bad Tank Davis didn’t do it himself, seeing that a win over Farmer, 29, would have been a lot bigger than beating 38-year-old Yuriorkis Gamboa. The fans wanted to see that fight, but it failed to materialize. Hopefully, Mayweather Promotions don’t waste Tank Davis’ potential by not putting him in with the good fighters that are young

Tank Davis said this on social media in reaction to Farmer’s loss: “Don’t ever disrespect me again.”

DONT EVER DISRESPECT ME AGAIN 🙄

“I just got my eye stitched. It was pretty bad. I had 15 stitches on it,” said Diaz to AB Boxing News following his win over Farmer. “I’m excited. I’m the champion of the world. I worked hard for this s—. I’m going to enjoy it with my family and my friends.

It looked like Diaz had a size advantage over Farmer after he rehydrated for their fight last Thursday. In looking at the two fighters inside the ring, Farmer appeared thinner, and weaker the 27-year-old Diaz.

Both guys are 5’6″, but Diaz looked stockier, and appeared considerably heavier. Diaz Jr. looked like he was at the welterweight limit at 147 during the fight. It would be interesting to know exactly how Diaz and Farmer were on the night.

If it turns out that Diaz did have a big weight advantage over Farmer, then that would explain why he won the fight. You don’t want to take credit away from Diaz, but you’ve got to say that weight had a lot to do with him beating Farmer.

“I had to fight through it, and fight through the pain. So we got it. There’s a rematch clause. We’ll probably fight in six months. I just want to make sure my eye’s right, and my hands good and we’re ready to go. I told him, ‘thanks for the opportunity.’

“He’s a hell of a fighter, and I respect everything he’s done, you know?” said Diaz Jr. on Farmer. “Now it’s my time to take the throne, and hopefully we get this rematch. I’m taking all you mother-f—- out at 130. Now me and my team are A-side now. We got all the leverage. We’re champion of the world, and we worked hard for this,” said Diaz.

After the fight, Farmer was talking about wanting to run it back for April, and I thought that was too soon given the huge cut that Diaz suffered over his left eye. It was a huge cut, and as he said, it took 15 stitches to close up. That’s a big cut. It’s obviously not as big as the cut that Tyson Fury suffered in his last fight against Otto Wallin, but it’s still big. Fury needed 47 stitches to close up his cut.

A conservative estimate is six months before Diaz will be ready to fight Farmer again, and that’s if the cut doesn’t reopen during training camp.

“I’m going to talk to my manager, and we’re going to go from there,” said Diaz. “We got to see what’s right for me. Berchelt, Jamel Herring, Rene Alvarado, Oscar Valdez, Gary Russell, Gervonta Davis. Let’s all get it, and let’s get the fight fans a great fight.

Those are excellent fights for Diaz that he’s talking about, but he’ll need to beat Farmer to get to them. Farmer is going to execute the rematch clause to force Jo Jo Diaz to fight him again, so he’s wasting time dreaming of fight the other top 130-pounders.

Diaz already lost to Russell Jr. by a one-sided 12 round decision in May 2018. There’s no point in those guys fighting again, because Russell Jr. was just too good. Jo Jo Diaz should worry about getting passed Farmer first, and then look to go after Oscar Valdez and Gervonta Davis. Those are the better fights for Jo Jo to take.

Diaz Jr. wanted to attack Farmer to the body

“Going into the fight, we knew we had to dictate the pace, jab to the body and attack the body right away so he won’t be moving as much,” said Davis to secondsout. “I wanted him to stand in the pocket so I could be landing some hard shots.

“Unfortunately, I got a massive cut in the 2nd round,” said Diaz. “I didn’t want to pay any mind to it, but I knew it was really bad. So I had to make some minor adjustments in there, and try to avoid his hooks, and his jabs to the face so it won’t open up as much.

The body punching was a factor in Jo Jo Diaz’s win over Farmer, as it took away his ability to move around the ring. Initially, Farmer was using movement at the start of the fight, but that went away when Diaz began hitting him to the midsection.

The fight got out of hand once Diaz suffered a bad cut over his left eye in round 2. That’s when Diaz started going for broke, taking the fight to Farmer with a sense of ferocity that wasn’t there before. Farmer wasn’t ready for that abrupt change from Diaz, and the body shots took the air out of his tires.

“I wasn’t concerned at all. I knew it was happening for a reason,” said Diaz. “Everything I’ve been through with my former losses to Gary Russell, I felt like everything was falling in place. Getting the fight, and fighting in Super Bowl weekend, fighting for a world title against Tevin Farmer.

“I just knew it was something special,” said Diaz. “As soon as I got the cut, I knew it was really bad. The doctor came in, and he asked, ‘Do you want to fight through it?’ And I said, ‘Yes, let me fight through it.’ I’ve got the championship mind. I’m not going to let this third one go by.

“I think after the 5th or 6th round, once I started opening up, getting a little more relaxed in there, and letting my hands go, I could sense that Tevin Farmer didn’t have the pop, and he wasn’t as elusive as he usually is. I started dictating the pace, and my body shots are very, very deadly,” said Diaz Jr.

The way that the cut above Diaz’s left eye was bleeding, the ringside doctor could have stopped the contest. No one would have complained, and given the doctor flak if he’s pulled the plug on the fight. With a cut like Diaz’s, it was risky leaving him out there.

Farmer got tired around the 5th or 6th, and Diaz took full advantage of it by increasing his punch output.

Farmer will make decision to force rematch with Diaz

“So I think that right there was having a major impact on the fight when he was having to fight in the pocket,” Jo Jo Diaz said about Farmer’s movement being neutralized by his body punching. “So after that I was having a blast in there. That’s what I love to do. I love to fight, and enjoying it. And I was enjoying the body shots he was landing.

“He was landing some good shots as well,” said Jo Jo Diaz about Farmer. “I just love fighting, and I’m very happy, and everything turned out well. In the contract that I signed with Tevin Farmer, there was a rematch clause, but I’m going to play it by ear. If Tevin Farmer wants a rematch, I’ll be happy to give it to him. But the rematch is going to have to happen within six months.

It would be really surprising if Farmer doesn’t force the rematch with Diaz, because he’ll have a hard time if he doesn’t. Farmer does need to think about moving up to lightweight already, because he’s been at 130 for too long already. He’s been at super featherweight for virtually his entire 11-year professional career, and that’s too long. He should have moved up to 135 last year.

It looked like Jo Jo Diaz Jr. was having a lot of fun in the fight after the first four rounds. He seemed to realize to realize that he was going to win the fight, and that made the difference.

“Every single day I would wake up, saying, “I’m going to beat Tevin Farmer.’ I’m just very happy,” said Diaz. “I had a lot of doubters. A lot of people were talking bad about me, and saying that I didn’t have a shot, and that I’m washed up. That just motivated me. I’m a person that had a lot of doubters, and that I’m not going to become a champion, and that I’m washed up. I just stuck to the game plan, and we got through it. Now I’m the champion of the world,” said Jo Jo Diaz.

Beating Farmer definitely proved a lot of doubters wrong for Diaz, but he’s going to need to do it again to really show he’s for real. Farmer had a hand injury, and we don’t know how much of an impact that played in the outcome.

You could tell that Farmer was taking the high road, and using his hand injury as an excuse after the fight. But still, Farmer only had one good hand in the fight, and he wasn’t going to be able to beat a world class fighter like Diaz with just his left hand alone.

To really prove his doubters wrong, Diaz will need to beat some or all of these guys:

Hearn: Andrade MUST fight Canelo, GGG, Charlo or Munguia NEXT »