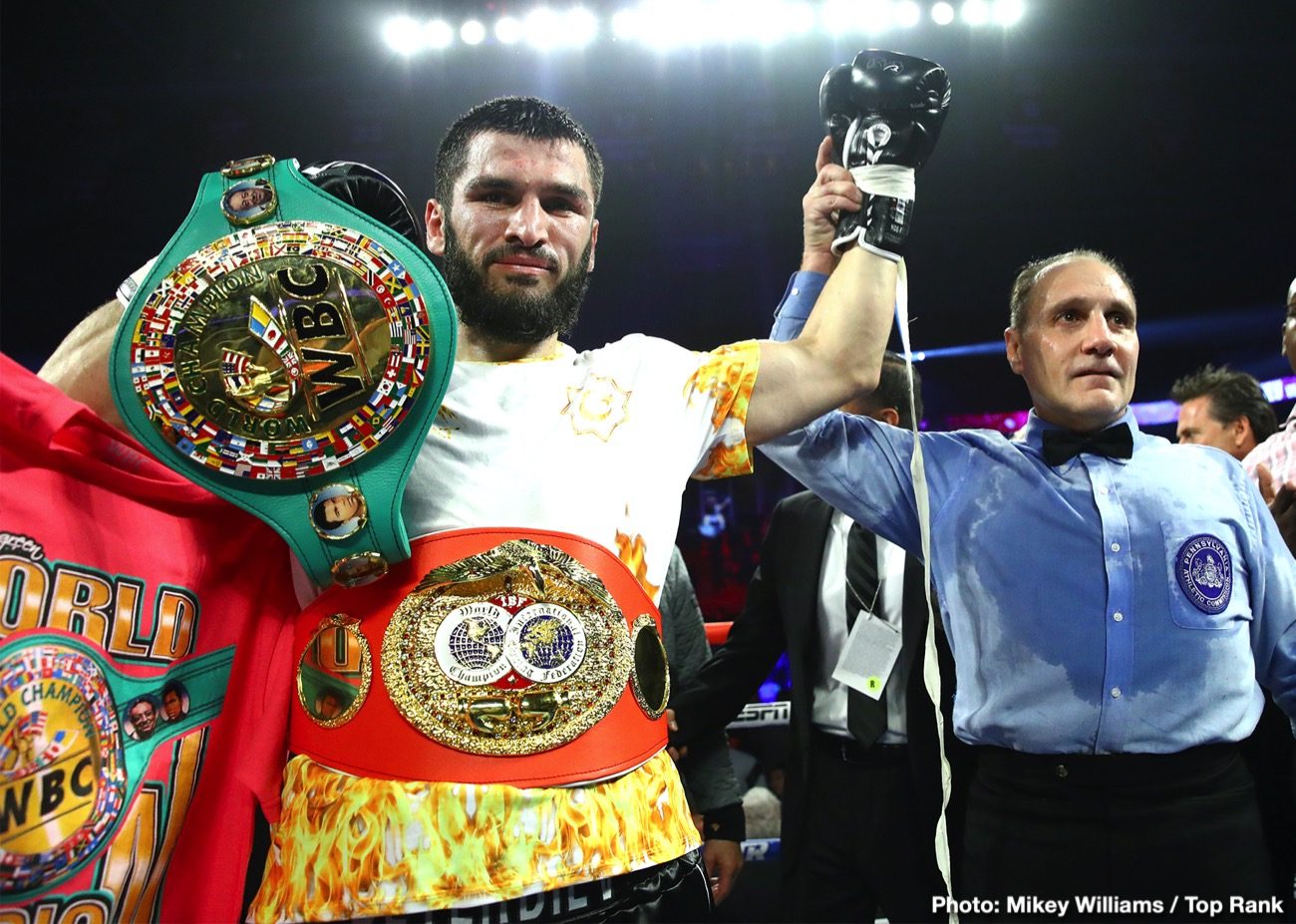 By Allan Fox: Artur Beterbiev will be fighting in August, possibly in a unification fight against Dmitry Bivol in St. Petersburg, Russia. The fight could take place at the Gazprom Arena, which seats 68,000 fans.

IBF/WBC light heavyweight champion Beterbiev (15-0, 15 KOs) must first defend against his IBF mandatory Meng Fanlong (16-0, 10 KOs) on March 28 at the Centre Videotron in Quebec City, Quebec. As things go, this isn’t expected to be a problem fight for Beterbiev.

Beterbiev vs. Bivol is a match that fans have wanted for a long time, and now it looks it’s on the verge of happening in August. It’s a classic match pitting the puncher Beterbiev against the boxer Bivol. The winner of the Beterbiev-Bivol fight can make a strong case that they’re the #1 fighter at 175.

Beterbiev and Bivol must win interim fights before August

This should be a fairly cut and dried title defense for Beterbiev against Fanlong on March 28. It’s clearly a fight that Beterbiev and his promoters at Top Rank wouldn’t be bothering with if they weren’t forced to take it due it being the IBF mandatory.

The 2016 Chinese Olympian Fanlong isn’t a puncher, and he’s not proven himself in the professional rankings to be worthy of being Beterbiev’s IBF mandatory. This is another example of the International Boxing Federation having another arguably weak contender ranked at #1 with their organization.

WBA 175-lb champion Bivol (17-0, 11 KOs) is expected to fight in mid-April. Gilberto Ramirez and Badou Jack are two names that have been mentioned as possible options for the 29-year-old Russian fighter Bivol.

“I asked to speak with Bivol’s promoters about holding a fight in August in St. Petersburg,” said Umar Kremlev, the General Secretary of the Boxing Federation of Russia, to sports.ru.

Beterbiev’s co-promoter Bob Arum of Top Rank recently discussed the idea of matching him against Bivol in a unification fight after he faces Fanlong. It looks like Arum was serious about wanting to make this fight. Arum will need to work with Bivol’s co-promoter Eddie Hearn of Matchroom Boxing to get the Beterbiev-Bivol bout done.

As long as Hearn doesn’t block the fight by choosing to match Bivol against one of his fighters in his stable, it should happen. Hearn hasn’t mentioned wanting to put his Matchroom fighters Joshua Buatsi, Callum Smith or Billy Joe Saunders in with Beterbiev.

For Hearn not to be pushing to have those guys take on Beterbiev or Bivol, it’s a sign that he respects those guys, and doesn’t want to have Callum, Saunders or Buatsi get beaten.

Bivol fight in April in the U.S

“In February, we hope to leave for the United States in order to conduct a battle somewhere in mid-April,” said Bivol to sport.ru on his next fight. “We were asked if we want [a fight] with Gilberto Ramirez or Bad [Badou] Jack. Of course, we want. These are good boxing names that are interesting to me,” Bivol said.

Although Arum was hoping that Canelo Alvarez would face Beterbiev after his recent win over WBO light heavyweight champion Sergey Kovalev, the Mexican star chose to give up the belt and move back down in weight. Arum isn’t too bothered about Canelo choosing not to fight Beterbiev in a unification match. He didn’t think it would be a fair fight with the 5’11 1/2″ Beterbiev facing the 5’8″ Canelo.

“I don’t think it’s fair to Canelo to fight a guy [Beterbiev] that big,” said Arum. “We have a lot of light heavyweight fights that we are doing.”

It’s too bad Canelo chose not to test himself against Beterbiev before moving back down to 160, because at least he could quiet his critics. They see Canelo as a cherry picker for having selected 36-year-old Kovalev in going after his 4th division world title. If Canelo had stayed at 175 and taken on Beterbiev or Bivol, the boxing world would give him more respect than they are now.

« Robert Garcia on training Andy Ruiz Jr: ‘I have time, but I’m not asking’ to be his trainer