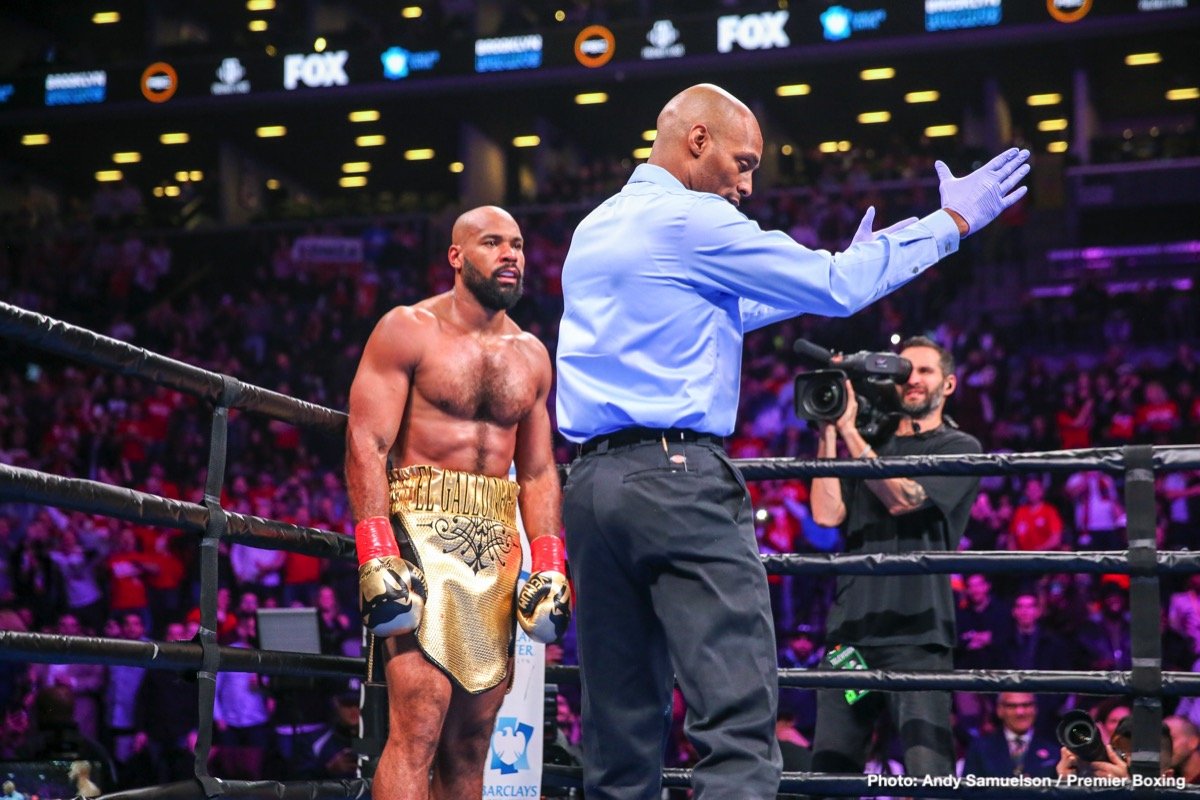 By Tim Royner: Former heavyweight world title challenger Gerald Washington (20-3-1, 13 KOs) will be looking to lock himself in as the mandatory challenger for IBF/WBA/WBO champion Anthony Joshua when he faces Charles Martin (27-2-1, 24 KOs) on February 22.

Washington and Martin will be fighting a 12 round IBF title eliminator on the Wilder-Fury 2 pay-per-view card on ESPN and FOX. The card kicks off at 9:00 p.m. ET/6:00 p.m. PT.

Washington to get Joshua fight with win over Martin

Joshua’s insistence in winning all the world titles at heavyweight and holding them down is creating opportunities for fighters like Washington, Martin and Kubrat Pulev. The smart thing for Joshua to do would be to vacate some of his heavyweight titles so that he’s not forced to make mandatory defenses against fighters that bring little to the table. AJ isn’t likely to do that, however.

Joshua seems to believe that having a lot of world titles validates him in the eyes of the casual boxing fans. Whether that’s true or not is debatable. But Joshua would do himself a big favor if he reduced the amount of titles in his possession to just one instead of three.

Those are guys that would normally not be high on Joshua’s list as potential opponents due to them lacking a big fan. Washington could be the next overnight millionaire if he defeats the 6’5″ southpaw Martin to earn the IBF secondary mandatory position. With a win over Martin, Washington would be the next Andy Ruiz Jr. to get a big payday against Joshua, and change his life situation.

#9 IBF and #11 IBF Martin are fightingin in an IBF heavyweight title eliminator in the co-feature spot on the Deontay Wilder vs. Tyson Fury undercard this month at the MGM Grand in Las Vegas, Nevada. The winner of the Martin vs. Washington fight will be the secondary IBF mandatory behind Kubrat Pulev to get in line for a title shot against Joshua.

Big payday ahead for Washington with win over Martin

What that means for the 37-year-old Washington is he could potentially be facing Joshua (23-1, 21 KOs) for his IBF title in 2021 as the mandatory if he beats former IBF champion Martin on February 22.

Needless to say, the payday that Washington would get against Joshua would likely set him up for life, especially if the match takes place in one of the many countries that are willing to pay top dollar to host AJ. It would be a dream come true for the 6’7″ Washington, who many boxing fans felt was done as a fighter after his 2nd round knockout loss to Adam Kownacki in January of 2019.

“The plan is to hunt down Joshua,” Washington said to skysports.com.

Washington recently helped Andy Ruiz Jr. with sparring for his rematch with Joshua last December. It’s possible that the sparring that Washington did with Ruiz helped him improve. That’s the ideal situation, because Washington is going to need to be a lot better than he’s shown for him to beat Martin.

Three years ago, Washington challenged WBC heavyweight champion Deontay Wilder for his title in February 2017, and was stopped in the 5th round in Birmingham, Alabama. In the first 4 rounds, Washington was giving the 6’7″ Wilder a lot of problems with his size.

After 4 rounds, the scores were 39-37 Wilder, 38-38, 38-38. A lot of boxing fans felt that Washington was ahead going into the 5th round. However, Wilder spoiled Washington’s dream of becoming a world champion by dropping him with a right-left combination in round 5.

After Washington got back to his feet, Wilder unloaded on him with a flurry of windmill-like shots that caused referee Michael Griffin to step in and stop the fight with Washington still on his feet. Washington was badly hurt, and he wouldn’t have lasted more than 4 to 5 seconds had the fight not been stopped.

What’s interesting is Wilder’s knockdown of Washington was similar to the right-left combination that he dropped Fury with in the 12th round of their fight in 2018. The difference is Fury got back up, and was able to dodge Wilder’s follow up barrage. Washington couldn’t do that, and he was taken out quickly.

In Washington’s 4 fights since his loss to Wilder, he’s posted a 2-2 record, which is obviously poor for a fighter about to compete in an IBF title eliminator.

The 33-year-old Martin has to be viewed as the favorite going into his fight with Washington on February 22. Although Martin was blown out by Joshua in 2 rounds in losing his IBF heavyweight title to him in April 2016, he performed better against Kownacki than Washington did.

Martin lost a close 10 round unanimous decision to Kownacki in September 2018. As this writer already mentioned, Kownacki destroyed Washington in 2 rounds in 2019. Of course, styles make fights, and there’s a chance that Washington could still beat Martin to earn the golden ticket to face Joshua in 2021.

One of the biggest criticisms Martin has from boxing fans is the fact that he’s not been all that active since his loss to Joshua in 2016. Since that fight, Martin has fought just 5 times in the last 4 years.

Perhaps the big payday that Martin got in his loss to Joshua has given him the luxury of not needing to fight often. However, it’s likely that Martin would have already put himself back in a world title fight long ago if he’s stayed busy with his career, and fought 3 times a year from 2016 to 2020.

This is Martin’s opposition since loss to Joshua: