By Tim Royner: Eddie Hearn is hoping that Deontay Wilder won’t exercise his contractual rematch to force a third fight with Tyson Fury but he believes he will. British promoter Hearn says that if Wilder (42-1-1, 41 KOs) doesn’t force the third fight with Fury, then he may not ever get another shot at the fight.

Hearn thinks Wilder will surface today, and let the boxing world know that he’ll take the third fight with Fury. He says that everyone wants to see Fury fight, Anthony Joshua, next, including Top Rank, MTK and Sky Sports.

It just comes down to whether Wilder exercises the rematch clause or not to force a third fight with Tyson. If so, then Hearn will need to have Joshua continue down his patch of defending against his IBF mandatory Kubrat Pulev on June 20th in London.

As for Joshua’s WBO mandatory Oleksander Usyk, Hearn rarely mentions him, and it’s unclear if he fancies the prospect of making the Joshua-Usyk fight. Usyk is a bad style match-up for Hearn, which is probably why he doesn’t mention the Ukrainian’s name. 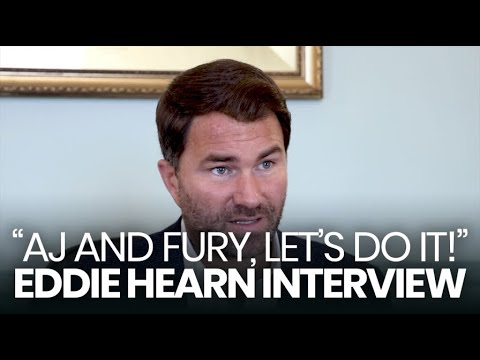 Fury (30-0-1, 21 KOs) beat Wilder by a 7th round knockout last Saturday night on February 22 at the MGM Grand Arena in Las Vegas. The beating was continuous by the bigger 273-lb Fury, and Wilder was eventually pulled out of the fight by his trainer Mark Breland in the 7th.

Although Wilder wasn’t happy about the fight being stopped by his corner, it wasn’t his call. Breland noticed that Wilder was just taking punishment, and he wasn’t able to answer back effectively.

Eddie plans on matching unified heavyweight champion Anthony Joshua against Fury, and he thinks they may end up fighting each other 2 to 3 times before they’re done.

Hearn notes that Wilder hasn’t been seen since last Saturday, and he wonders if he’ll ever surface again. That would be good for Hearn, because he wants to match Joshua against Fury as many times as possible without Wilder inserting himself into the equation.

“So now we got to see what Deontay Wilder is made of because he has to make a quick decision whether to have a rematch,” said Hearn to Sky Sports Boxing. “The problem is if you don’t take the rematch now, do you ever get your shot, because AJ is going to fight Fury. They might do it twice, they might do it three times. Who knows?” Hearn said about his dream of Fury fighting Joshua 2 to 3 times.

“So my money is on Wilder choosing to rematch Tyson Fury. I hope he doesn’t. Joshua isn’t a Wilder, who can get backed up, pushed around and mauled in clinches. Joshua is a big, big heavyweight, as they both are. I don’t want him to take the rematch,” said Hearn about Wilder. “Deontay Wilder has to take the rematch.

“I believe Anthony Joshua is made of different kinds of stuff than Deontay Wilder. Wilder had the look in his eyes last Saturday of, ‘I don’t want to even be here.’ I’m secretly hoping Deontay Wilder won’t take the rematch, but my belief is he will because he’ll feel it’ll be his chance to regain his heavyweight championship,” said Hearn. 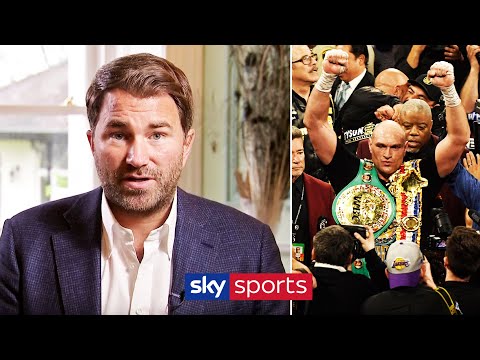 The chances of Fury fighting Joshua 2 to 3 times, as Hearn hopes for, is slim and none. Fury, 31, has already said he plans on retiring after 3 fights, and he’s not going to stick around if he batters Joshua the way he did Wilder.

After Fury’s win over Wilder last Saturday, he now only has 2 fights left before retirement. He’s not going to continue to fight just so that he can let Eddie realize his dream of having Joshua repeatedly fight Fury.

“Fury will beat Wilder again, and you will get this fight [Joshua-Fury],” said Hearn in predicting the outcome of the third fight between Tyson and Deontay. “Joshua said on the phone, ‘How do we make this fight happen?'” said Hearn on AJ asking him how he can get the Fury fight. “Firstly, this hinges on Wilder.  But we wait on Wilder,” said Hearn.

Deontay holds the keys to Joshua’s future right now with his rematch clause with Fury. If Wilder forces the third fight with WBC champion Fury, then Joshua will need to face Pulev, and then potentially Usyk after that. Anything can happen with those fights. With Joshua’s chin and poor stamina having been exposed in his loss to Andy Ruiz Jr. last June, it’s not a sure thing that he beats either of those two mandatory challengers.

Wilder would really foul up Hearn’s plans/dreams of a Joshua-Fury fight if he beats Fury in the trilogy fight. If that happens, you can believe that Fury will be looking to persuade Wilder to fight him a fourth time. That would obviously be the fight to make, especially if Joshua looks poor against 38-year-old Kubrat Pulev in June.

Hearn: Who knows if we’ll ever see Wilder again?

“If he exercises the rematch, we have no choice but to fight Pulev next,” Hearn said on Deontay taking the rematch with Fury.  “Deontay Wilder has been uncharacteristically quiet. He didn’t even go to the press conference. He hasn’t said a word since. In fact, his soul may even be still at the MGM Grand Garden Arena. Who knows if we’ll ever see him again. I expect him to come out today on Instagram and say, ‘I’m taking this rematch,'” said Hearn.

It’s safe to say that we WILL see Wilder again, and it’ll be against Fury. The 6’7″ knockout Wilder won’t run from the trilogy fight with Fury, and he’ll come back a lot better. Hearn needs to be patient, and wait for the smoke to clear from the Wilder-Fury rivalry because he’s too eager to put Joshua in with Fury right now. In the long run, it might be better for Joshua and Hearn to make the easy money while they can, because if AJ loses once, twice or three times to Fury, his career is going to in tatters.

The big money that Joshua once pulled in for his fights against lesser heavyweights may be a thing of the past. As such, it’s better for Hearn and Joshua to make the easy money against the likes of Pulev while they still can, because Fury may be all wrong for him.