By Chris Williams: Devin Haney says he doesn’t understand why Ryan Garcia is talking so much about wanting a fight with Gervonta ‘Tank’ Davis because he doesn’t see that as a realistic option at all for him. Haney (24-0, 15 KOs) believes that a fight between him and Ryan (20-0, 17 KOs) is a match that can EASILY be made between his promoters at Matchroom and Ryan’s with Golden Boy Promotions.

Haney wants Garcia to stop ducking him, and make the fight happen this year. Unfortunately, the Golden Boy star Garcia, 21, has already mentioned the next three fights he wants in 2020, and none of them include Haney.

Garcia told Golden Boy that he wants Jorge Linares, Luke Campbell and Gervonta ‘Tank’ Davis in his next three fights. Oscar De La Hoya, Ryan’s promoter, has already reserved the Staples Center in Los Angeles for the Linares fight in July. That fight looks like it’s going to happen next.

If Haney can’t get Ryan in 2020, he wants to face Adrien ‘The Problem’ Broner and/or Mikey Garcia. He would be willing to go up to 140 for the fight against Mikey. That fight is probably a longshot though, as Mikey is facing Jessie Vargas on February 29, and if he wins that contest, he could be facing WBA welterweight champion, Manny Pacquiao, after that.

“You never really know what somebody is going through, and you never really know the circumstances,” said Haney to Fighthype about Gervonta Davis’ legal problems. “We’re just on the outside looking in, so we never know. I can never judge him or the situation that I don’t have information for.

Tank Davis’ promoters at Mayweather Promotions seem to be moving him at a glacial pace in terms of matching him against good opposition. They’re definitely taking the slow approach to the career of the 25-year-old Tank, and they’re probably going to elect not to make a fight between him and Ryan.

That could prove to be a mistake on Mayweather Promotions’ part, considering that if Ryan gets beaten in 2020, they’ll have missed their opportunity to have Tank be the one to do that.

“I’m happy that Oscar is starting to speak about it [Haney vs. Ryan Garcia], and the fans and reports are making Ryan Garcia speak about it because it seemed like he was scared to say my name,” said Haney. “He was saying, ‘Tank Davis,’ even though he knows that fight isn’t realistic or isn’t going to happen anytime soon. So I’m happy that people are putting pressure on him, and he [Ryan] can’t duck me anymore,” said Haney.

“That was me beating the s— out of him,” said about a clip that was leaked of him getting the better of Ryan. “You saw a little glimpse of what I would do if we fought in the pros with eight-ounce gloves, no headgear and Devin Haney a lot stronger and a lot better. We’ve always been cool.

“There’s never been any bad blood between us. I got a lot of respect for him, and I like what he’s doing. He’s made himself into a star. You’ve got to respect that. A lot of big fights,” said Haney when asked what fights are out there for him besides Ryan Garcia.

Bernard Hopkins of Golden Boy Promotions told Haney and his dad Bill Haney last Friday night that he’s not going to get a fight against Ryan until after he faces Linares, Campbell, and Tank Davis. Haney, 21, is being saved for last, and that’s something that likely won’t change.

Devin may need to move up to 140 if he’s frozen out at 135 by the top guys. Top Rank promoter Bob Arum hasn’t mentioned wanting to let Teofimo Lopez or Vasiliy Lomachenko fight Haney.  There’s really no one for Haney to fight at 135 other than the winner of the Luke Campbell vs. Javier Fortuna fight.

“Adrien Broner, Loma is still a big fight, Teofimo is still a big fight. The 135-pound division is heating up, and I’m happy to be a part of it,” said Haney. “The only way I would go up to 140 is for Mikey Garcia because it wouldn’t make any sense to make those fights.

“We never know how realistic he is,” said Haney when asked if it was “realistic’ for Broner to come down to 135 to face him. “He trolls a lot on the Internet, so we never know how serious he is. But what I can say is this is a fight that I’m definitely entertaining. When he said 135, I was like [Haney shrugs his shoulders], but you never know. He could get serious and we could make it happen,” said Haney.

Broner, 31, says he wants $20 million to fight Haney, which means he’s not going to take the fight unless it gives him a huge payday. Adrien is clearly on the downside of his career, but he’s still an option for fights against Danny Garcia, Keith Thurman, Errol Spence Jr., and Shawn Porter. There’s more money for Broner to make fighting those guys than him taking on Haney.

Haney has no interest in Lomachenko vs. Teofimo

“I don’t care,” said Haney when asked what his thoughts are on the Vasiliy Lomachenko vs. Teofimo Lopez fight in May. “Neither one of those guys show interest in wanting to fight me. Bob [Arum] shows no interest in either of those guys fighting me. Whether it’s the worst guy or the best guy, he wants no ties with me. We understand why.

“So I have no interest in watching those guys fight and give them attention because those fights aren’t realistic,” said Haney.

Lomachenkoa and Teofimo are likely to continue to be matched against other fighters rather than take on Haney. That could change in the distant future if Haney becomes a popular guy in 5 to 7 years. 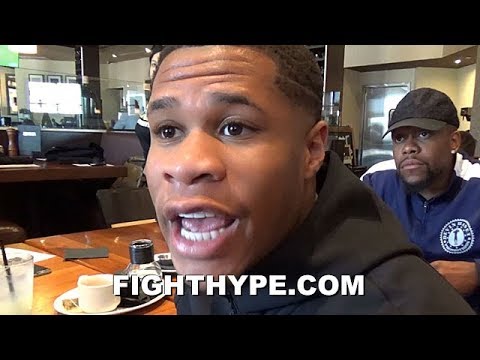 
« Deontay Wilder vs. Tyson Fury as big as they get