Devin Haney on Luke Campbell: ‘He talks SMACK. I want to [bleep] him up!’

By Chris Williams: Devin Haney says he wants to mess Luke Campbell up because he views him as a “HATER”, who talks a lot of trash. Haney (24-0, 15 KOs) says Campbell won’t fight him for some reason.

Those two will soon be fighting for Haney’s WBC 135-lb belt, which was taken from him by the World Boxing Council after he suffered a shoulder injury in his successful title defense against Alfredo Santiago last November.  The WBC gave Haney the ‘Champion in Recess’ designation while he’s coming back from his shoulder surgery.

While Haney is recovering, Campbell, 32, and Fortuna will fight for the vacant WBC lightweight title. Haney has the option to face the winner if he so desires. If Haney could get one of the big names to fight him like Ryan Garcia, Vasiliy Lomachenko or Gervonta Davis, then he wouldn’t bother with fighting the Campbell-Fortuna winner, but this might be his best option.

Haney: Campbell is a hater

“Luke Campbell is a decent fighter, and Javier Fortuna is a good fighter.,” said Haney to Boxing Social. “It’s a really 50-50 match-up. I don’t give anyone the edge. I want Campbell to win so I can f— him up. He talks a lot of smack. I hear him talking, and he always has something to say. I feel like he’s a hater, but he doesn’t want to fight me.

“He had the chance to fight me,” Haney said of Luke Campbell. “He decided to go the Lomachenko route, which he lost and then cried about. I hope me and Campbell can fight because I really don’t like him.

“I want to f— him up. Luke Campbell, every big fight, he loses,” Haney continued. “There would be no reason for me to go to the UK to fight him. He can come here and fight me in Las Vegas or the Bay Area or LA or somewhere. There’s no reason [to fight Luke in the UK]. Luke Campbell, he can fight me here,” said Haney.

Haney vs. Campbell should be an easy fight to make, as they’re both with the same promoter Eddie Hearn of Matchroom Boxing. As long as Hearn is on board with making that fight, there shouldn’t be a problem for those two guys to fight each other.

The boxing skills of Haney would give the southpaw Campbell major difficulties, and we could see him losing again. When Campbell has stepped up against the best in the past, he’s lost to Lomachenko, Jorge Linares and Yvan Mendy.

Luke struggles to stay on his feet when he gets hit hard. Unfortunately, it’s too early to talk about Haney-Campbell because Luke still needs to defeat Fortuna to win the vacant WBA lightweight title. It’s not a given that Campbell beats Fortuna.

Devin values big fights over being a world title

“I miss sparring. And I can’t wait to get back,” said Haney. “I felt like I needed the rest. My body was tired, and maybe that’s why I got the injury. But it feels good to get this rest. Now I’m anxious to get back fighting. He went in there and did what he had to do. It didn’t last long, and got him out of there,” said Haney on Ryan Garcia in his win over Francisco Fonseca.

Being a world champion no longer has the same cache as it once did, thanks to the numerous sanctioning bodies with their many world titles. The money to be made in boxing is in the big fights, and not being an anonymous belt holder.

In a perfect world, being a world champion will result in fighters making money and getting the best fights. That’s not the case now though. In this day and age, being popular is more important than holding  world titles. Look at contender Ryan Garcia as an example. He doesn’t hold a world title and yet he’s super popular.

“So good for him. He’s spoken about wanting to build the fight for a long time. He wants to keep building it and building it,” said Haney on Ryan Garcia. “But right now, I feel like the time is now. We’ve got the momentum. The boxing world wants to see it badly. I think we can make it happen in 2020 for sure. 135 is so popular. I believe it’s the best weight class right now in boxing.

“That’s Mikey Garcia, but if it’s not that fight, there’s no reason for me to move up,” said Haney.

A fight between Haney and Ryan Garcia isn’t likely to happen in 2020, as he thinks it will. Golden Boy Promotions want to match Ryan against Jorge Linares in July, and then Luke Campbell later this year. If there’s still time for Garcia to squeeze in one more fight in 2020, he’ll likely fight Tank Davis. 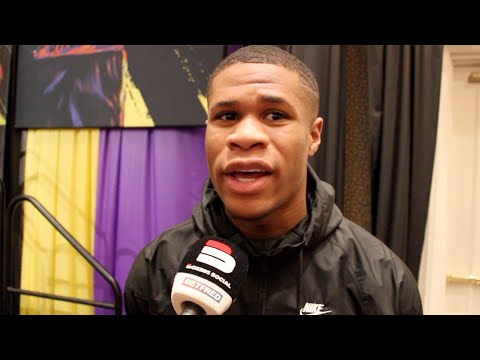