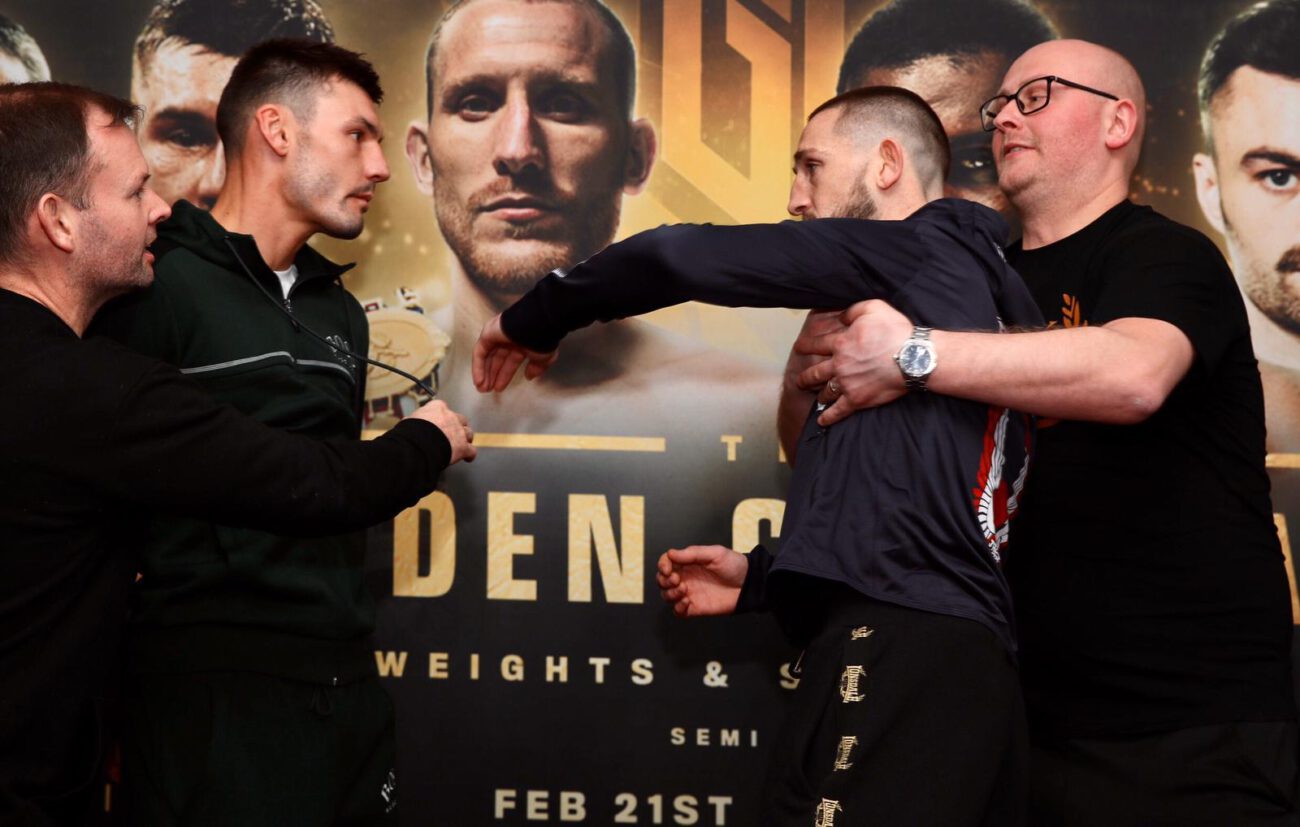 There was plenty of drama during the #GoldenContract featherweight and super-lightweight semi-final press conference, with fighters pulled apart, words exchanged, and even a wand fight between Dumb and Dumber characters.

The press conference proved to be extremely lively, with Jazza Dickens and Leigh Wood pulled apart during their face-off, while the ever-reliable ‘two Tyrones’ entertained the audience by dressing as Lloyd and Harry from Dumb and Dumber.

Wood said: “He’s entitled to his opinion. I don’t need to justify what he’s said because that makes it better for Saturday. He thinks I’m not the fighter that I am, and that’s fine.

“Back in 2013 when Jazza boxed Kid Galahad, Brendan Ingle said to me that I’ll fight Jazza one day. Our paths have gone different ways, and now we’re here today.”

Dickens said: “Leigh Wood has been built up massively fight on Sky. Years ago when we were amateurs he was brought in and was placed ahead of me. We had the chance to box off and I beat him, and now he’s in my way again.

“He hasn’t got the experience I’ve got and the power that I’ve got. People are giving him credit because he’s had more air time, but I’ve had good sparring to replicate him and I’m glad I’m fighting him.

“All I can go by is who he’s fought. My best accomplishment is probably beating Josh Wale for the British title. Wale should have beat Gavin McDonnell, and McDonnell stopped Wood, so that’s that.”

Walsh said: “McCullagh is a banana skin, but this is what I thrive on. I was under a lot of pressure in the last fight, and once again I can’t afford to lose and I must succeed.

“The pressure is good for me. His style will bring the best out of me and it’s down to me to show my experience. If I am what I think I am then I should be able to deal with him.

“His style is the one I’ve prepared for the most in sparring. He’s a negative fighter, but he gets positive results by frustrating opponents, so I like the challenge of it.”

McCullagh said: “I respect Ryan Walsh as a fighter. He’s achieved great things in his career so far, but I believe all of the pressure is on him.

“He is the tournament favourite and picked me. He’s had more than double my fights, so I’ve got nothing to lose.”

Davies said: “I feel a lot more positive. My humbleness is here to stay. Angel Fernandez said to me that he wouldn’t be involved with a fighter who’s arrogant, so that’s fine because I’m humble O.D now.

“I got the Golden Ball and I looked at Tyrone McKenna and thought that would be an amazing final. I then thought Mohamed Mimoune looked angry, so I decided to pick Ofori.”

Ofori said: “It’s been great the last six months. Especially after my first loss. To then have a fight six weeks later then another one a week later and get through to the semi-final, it’s exciting.

“I’ve been picked against a highly-ranked person, and I’m going to go in there and do what I have to do. I believe in myself and it will be a night to remember for me.

“I’m not insulted to be picked. If he thinks I’m the weak link, then he’ll have to have better heart in the fight than the heart he used to pick me.”

Mimoune said: “We worked on fixing the concentration errors during training. I can ensure you that the lapse of concentration in the last round won’t happen again.

“I’m fit and I’ve trained hard and I’m ready for the fight. McKenna is a nice person and puts on a good personality at times, but I will win.”

McKenna said: “I could bore everybody with how great camp has been and how good my diet has been, but nobody cares about that. People care about two names, and that’s McKenna and Davies.

“As long as Ohara comes through Ofori, then we’ve got Christmas in Summertime and the dream is alive. Mimoune is a great guy and I like him as a person, but Ireland doesn’t forget.

“Thierry Henry robbed us of the World Cup, he cheated us, and I’m here for revenge. Ireland is getting revenge on Friday and I’m getting that beautiful WBC Silver title.”

MTK Global Professional Development Coordinator Jamie Conlan added: “I think in the week of the biggest heavyweight fight of the year in Fury and Wilder, it’s a testament to everybody on the table that this show is mentioned in the same breath because of the quality of the show.

“I’m excited for four legitimate 50-50 fights with good honest professionals. Davies surprised everyone by not picking Tyrone, but he picked tactically and everybody else probably would have done the same.

“It’s fantastic to see Ofori come in at the last minute and get through to the semi-finals, it’s a true underdog story. McKenna and Mimoune is an interesting battle as Mimoune been round everywhere and McKenna is a cult figure in Ireland who is now with world-renowned trainer Pete Taylor.

“The featherweights was a hard pick, and I don’t think either of them wanted the Golden Ball. McCullagh is the only undefeated fighter, so it’s a potential banana skin for Walsh. It’s hard to get sparring to replicate the style.

“The fight for me on Saturday is Wood vs. Jazza. Every boxing enthusiast in Britain has talked about it, and they’ve both learned from their mistakes and it can be fireworks at any time. Their styles will blend nicely and I’m looking forward to it.”

The fight week activities continue tomorrow, with weigh-in on Thursday, and the all-important fight night on Friday.