Bivol and Usyk give Fury the edge against Wilder 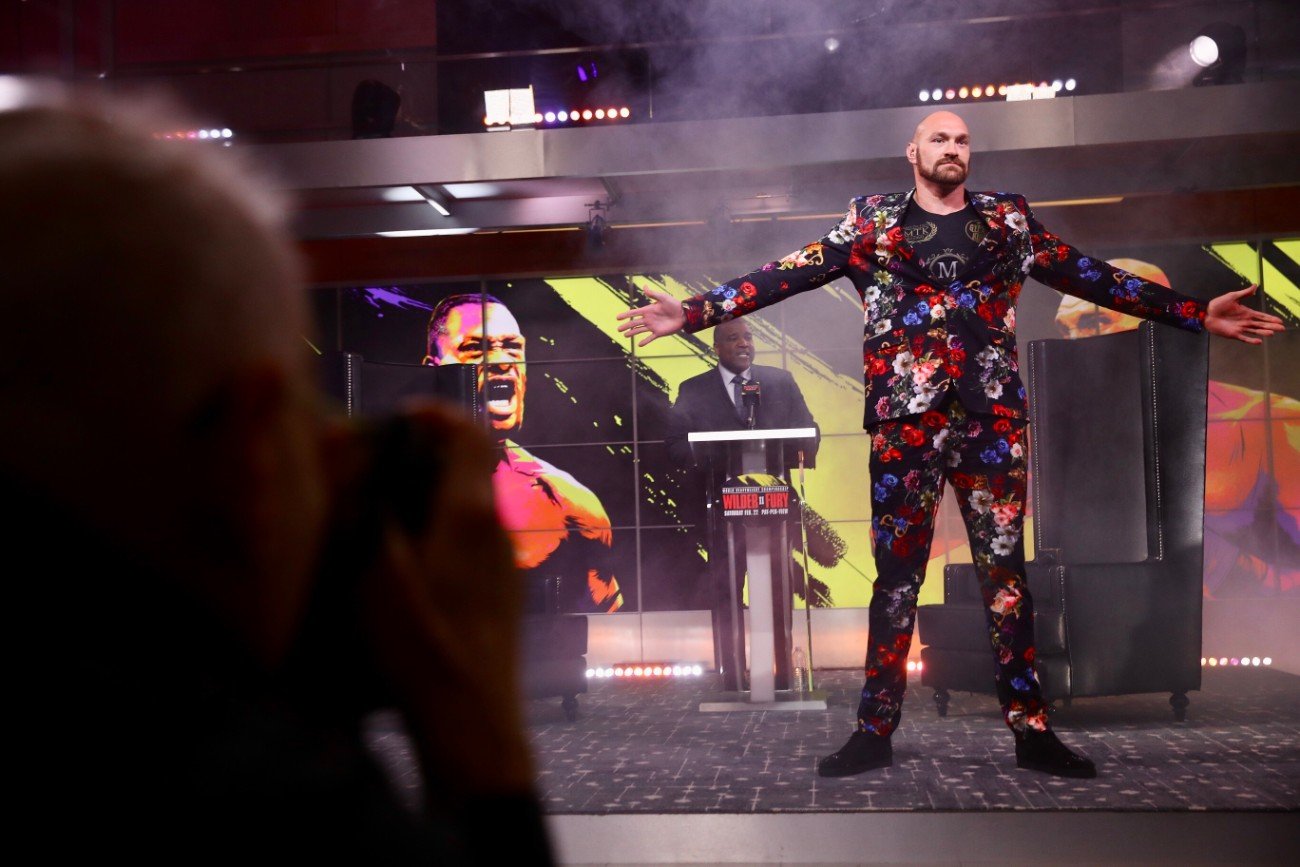 By Dean Berman: Oleksander Usyk and Dmitry Bivol are both leaning in Tyson Fury’s direction for his rematch with Deontay Wilder this month on February 22. Bivol and Usyk believe that Fury (29-0-1, 20 KOs) is a much better boxer than WBC heavyweight champion Wilder (42-0-1, 41 KOs).

WBA light heavyweight champion Bivol (17-0, 11 KOs) thinks Fury can possibly win if he comes into the rematch in better shape than in the first fight. However, if Fury is in the same condition he was in his previous match against Wilder in December 2018, then he’ll lose.

Fury did well last time in fighting Wilder to a 12 round draw. Where things fell apart for Fury was he couldn’t avoid Wilder’s right hand for the entire fight. That wasn’t a conditioning problem. It was more of a situation tied to Fury’s inability to take the power from Wilder’s right hand.

Bivol and Usyk give Fury advantage over Wilder

“I can say that I like Tyson Fury very much,” said Bivol to ren.tv. “He’s very impressive. It’s always interesting to look at him. In terms of boxing, of course, he is a very technical fighter. The main thing is to be in good shape, and then he can win. If he is in the same form as he was in the last fight, then Wilder can hook it,” said Bivol.

“I preferred Tyson Fury in the first fight. In the second, I will probably be more inclined towards him. He has much more skills than Wilder,” said Oleksandr Usyk ito ren.tv in leaning towards Fury.

It’ll be interesting to see if Bivol and Usyk turn out to be correct with their belief that Fury’s boxing skills take it. However, Usyk and Bivol probably aren’t the best fighters to ask about a prediction on the Wilder vs. Fury rematch.

Bivol and Usyk are both pure boxers, who win their fights by out-boxing their opponents. So if you ask them who do they prefer in a match between a boxer and slugger, it’s not surprising they’re picking the boxer Fury.

The extra weight that Fury was carrying around in his fight with Wilder in 2018 may have helped him take the right hand shots that he was getting hit with. Fury weighed 256 pounds compared to Wilder’s 212 lbs, and the weight advantage seemed to help the Gypsy King.

In the rematch, Fury could get down to the 240s. He hasn’t fought at that weight in eight years since his fight with Vinnay Maddalone in 2012, and he was weak at 245. It might be better for Fury to be heavier than lighter for the Wilder rematch.

“I tried to get it at Old Trafford, because it’s one of those dreams that I always wanted to fight there,” said Fury to BT Boxing. “People have wherever they want. Mine is to fight at the Manchester Football Ground. Wilder doesn’t seem to be very comfortable with fighting me in the UK. So, yeah, I have to come back over here and do it again if I wanted the fight, which I do.

“I’ve proved in the past that I’m willing to throw down with anybody in any country,” said Fury on his willingness to travel.  “It doesn’t matter. So we’re back on his home soil. I think that’s where he thinks he’s got the biggest advantage at home. Some people thrive on home advantage. It really doesn’t make any difference to fighters like me.

“I don’t feel any better fighting in Manchester than I in Las Vegas, Germany or Los Angeles, wherever on the road,” Fury said. “I did try, but it wasn’t going to happen. So yeah, we’re back here in Las Vegas,” said Fury.

The way that Fury is talking, he doesn’t sound entirely pleased at fighting Wilder in the rematch in the U.S. It probably doesn’t matter where the fight takes place, given Wilder’s power.

Wilder is the WBC heavyweight champion, and it wouldn’t have made sense for him to Fury pick the venue. Fury is the type of fighter who is at his best when the crowd is behind him. Wilder obviously doesn’t want to let Fury have the crowd eating out of the palm of his hand for the entire fight.

“I don’t think you can be better if it’s not broken,” said Fury when asked if he’s a better fighter now than when he fought Wilder in 2018. “It’s a winning formula. This time you’re getting a fighter that is match fit, and has been active for a few years rather than coming back from a lot of problems. You’ll see a much better mentally and physically boxer than I was before.

Fury is contradicting himself here by first saying that he doesn’t need to change anything in his game in one breath. But then moments later, Fury admits that he needs to change his style. That’s why he switched out Ben Davison in favor of Sugarhill Steward. Fury isn’t willing to admit that he doesn’t have the right style to beat Wilder without change.

Wilder really will be fighting the Gypsy King this time

Yes,” said Fury when asked if he’s going to be attacking Wilder to take him out. “Because I was boxing him last time, and I was hurting him. He was hurt a lot in that fight.

“I just didn’t have the energy to finish him, and I’ve seen a lot of stuff that I’m going to expose,” Fury said. “And stuff that I saw last time that I couldn’t pull the trigger on. This time he really is going to fight the Gypsy King,” and I’m going to take him out,” said Fury.

Having my energy may not be enough for Fury to win because it just means that he’s going to be putting himself at risk more.