Shakur Stevenson vs. Josh Warrington deal close for May 16 in Leeds 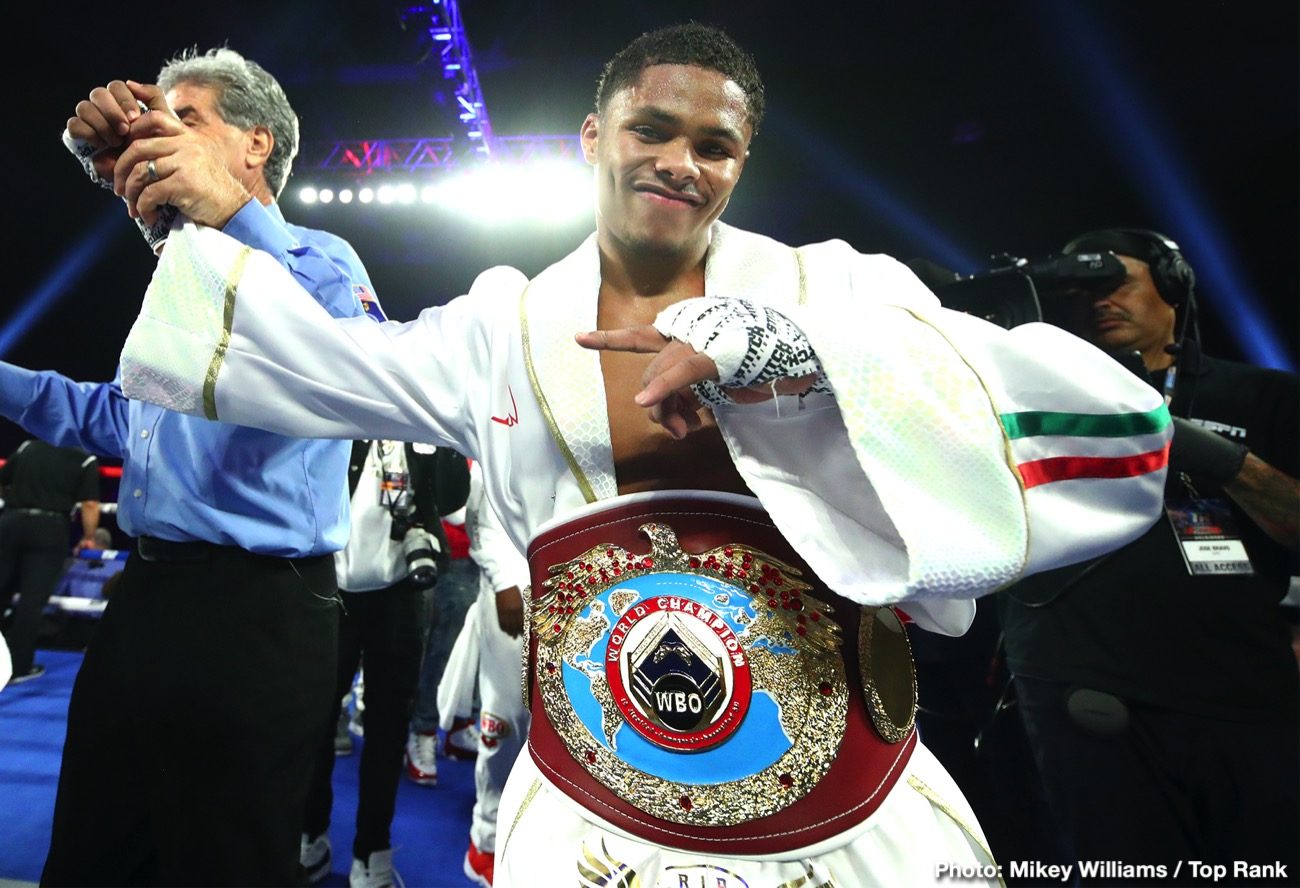 By Chris Williams: Top Rank promoter Bo Arum is close to having a deal set for a unification fight between WBO featherweight champion Shakur Stevenson (13-0, 7 KOs) and IBF champion Josh Warrington (30-0, 7 KOs) for the to face each other on May 16 at Elland Road Football Ground in Leeds. ESPN will be showing the fight.

Before that, Stevenson, 22, wants to take a tune-up fight against fellow Top Rank fighter Miguel Marriaga (29-3, 25 KOs) on March 14 at Madison Square Garden in New York, according to ESPN. If the fight is made, Stevenson vs. Marriaga will be the main event on March 14th card.

Stevenson doesn’t want to be inactive for 7 months

The 2016 U.S Olympian Stevenson doesn’t want to sit out of action for 7 months before fighting Warrington on May 16.

His fight with the 33-year-old Colombian Marriaga will enable Stevenson to sharpen up before he faces Warrington in May, and allow him to fight 3 times in 2020. Still, there’s risk involved in Stevenson fighting a big puncher like Marriaga just two months ahead of his unification match with Warrington, because he could suffer a cut or some other type of injury. Further, there’s also the possibility of Stevenson getting knocked out. Marriaga hurt Oscar Valdez in their fight in April 2017.

“There’s no reason he can’t fight in March and then again in May in the U.K. or maybe in June against Warrington,” Arum said to ESPN.com about Stevenson.

Stevenson will put the Warrington fight at risk

Well, there’s a pretty good reason why Stevenson SHOULDN’T fight in March, given that he could put his May fight with Warrington in jeopardy by doing so. If you Warrington, you can’t be pleased hearing the news of Stevenson fighting in March, because he could end up needing to delay his fight with him.

It’s also better for Warrington to scrap the idea of fighting Stevenson in May, and instead pick a date where he would have at least 4 months of inactivity before facing him. It won’t work well for Warrington if his fight with Stevenson is postponed due to him getting injured in the Marriaga fight, because he could wind up investing more time into this fight than needed.

NEWS:   Was Flyweight Jimmy Wilde the Best of the Little Men?

Stevenson won the vacant International Boxing Federation 126-lb title on October 26 in beating Joet Gonzalez by a 12 round unanimous decision. Some fans believe Stevenson took it easy on Gonzalez intentionally, because it looked like he was in 1st gear the entire fight.

Stevenson has to be confident for him to be considering taking the fight with Marriaga in March. Moreover, Stevenson is showing a lot of courage by him being willing to fight Warrington in his own hometown in Leeds. Not only will Warrington have the crowd behind him, but the referee will likely be from the UK.

Warrington has defended his IBF title successfully three times since capturing the belt in beating Lee Selby in May 2018. One of Warrington’s successful title defenses was against Kid Galahad last year in June.