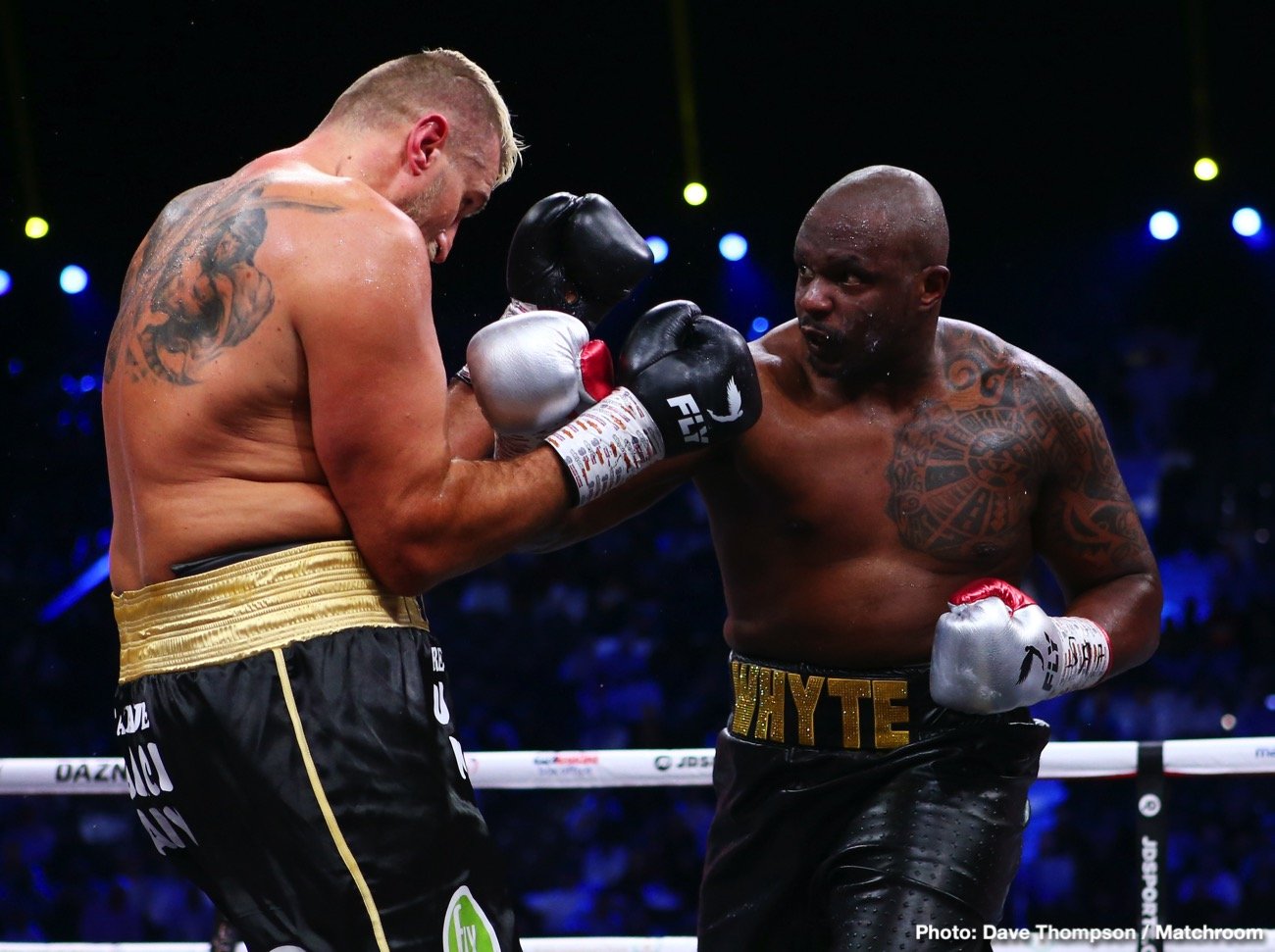 By Dean Berman: Eddie Hearn says he has a “deal virtually in place” for a fight between Alexander Povetkin  and Dillian Whyte for possibly Manchester, England on April 25th or May 2. Nevertheless, it’s still not a done deal, according to Hearn.

Hearn says he’s been in frequent conversations with Al Haymon about a fight between Andy Ruiz Jr. and Whyte for a fight that would take place in the U.S.

Hearn told IFL TV they made Ruiz Jr. (33-2, 22 KOs) a “real chunky offer” that has got their attention for a fight against Whyte (27-1 18 KOs) in the U.S. Although Hearn would be happy if Ruiz Jr. agreed to come to the UK to fight Whyte, he doesn’t see that happening.

Hearn points out that Ruiz wouldn’t agree to fight Anthony Joshua in the UK. He doubts he’d fight Whyte there.

There would be a lot more interest from fans in a fight between Whyte and Ruiz than a Whyte-Povetkin. The 40-year-old Povetkin (35-2-1, 24 KOs) is coming off of a controversial 12 round draw against Michael Hunter on December 7.

A lot of boxing fans felt that Hunter should have won. As such, it’s not surprising that Hearn is trying to put Povetkin in with Whyte under those circumstances. Povetkin arguably should have lost 2 out of his last 3 fights. Joshua stopped him in the 7th round in 2018.

Whyte-Ruiz should bring in big numbers as well, but obviously not the same as Joshua-Ruiz. Unfortunately, Whyt isn’t as well liked by boxing fans as Joshua is right now.

“There’s been a lot of conversations in the last 48 hours with [Al] Haymon’s guys and [Andy] Ruiz,” said Hearn on a fight between Whyte and Ruiz Jr. “I made them an offer to fight in the UK. then I had a meeting with DAZN, where they loved that fight for the U.S. So I went back with a real chunky offer for Ruiz, and it got everybody’s attention.

“Yes, for the U.S,” said Hearn about the location for the Whyte vs Ruiz Jr fight. “Look, he [Ruiz] wants a lot of money, and he didn’t want to come to the UK for Joshua fight. I’d stick that [Whyte-Ruiz] probably in Vegas or LA. It’s a big fight. Possibly New York. But you can see Dillian fight Povetkin and Ruiz.

“The aim is still a world title shot [for Whyte], and that’s why we have to make sure with the WBC we’re in a great position to get the winner of the Wilder-Fury 1 or 2, even if it has to be 2,” said Hearn .

Eddie knows that Ruiz is the guy that Whyte needs right now for his next fight, not the 40-year-old Povetkin. There is absolutely nothing for Whyte to gain in fighting Povetkin, and everything to lose. Povetkin has got enough left to possibly beat Whyte, and embarrass him.

With Ruiz coming off of a loss to Joshua, this is the ideal time for Dillian to fight him. Ruiz will be fighting with a new trainer when he returns to the ring, and they not have gelled by then. If Ruiz isn’t firing on all eight cylinders against Whyte, he could lose that fight.

The pay-per-view buys on Sky Box Office would be a lot more with Whyte fighting Ruiz Jr. than if he faces Povetkin. Joshua vs. Ruiz Jr just broke records for pay-per-view sales in the UK for their December 7 rematch.

The numbers that Whyte vs. Ruiz Jr. bring in won’t be anywhere close to what Andy brought in for the Joshua rematch, but even if they’re half as good, they’ll put a smile on Hearn’s gob.

Hearn has deal for Whyte vs. Povetkin

“Charr, I don’t know what he’s doing. I haven’t heard from him in ages,” said Hearn to IFL TV, when asked about Charr as an option for Whyte. “It gives you a version of the WBA title. I love the Povetkin [vs. Whyte] fight.

“But the Povetkin [vs. Whyte] deal is virtually in place, if that’s the route we go down on,” said Hearn. “Yes,” said Hearn when asked if the Whyte-Povetkin fight is for the UK.

It sounds like Hearn is ratcheting up pressure on Ruiz Jr. and Haymon to agree to his terms for the Whyte by. By Hearn talking about the Whyte vs. Povetkin fight having a deal in place, it’s a slick move on his part to attempt to get Ruiz and Haymon to agree to the money offer he’s given them. It’s said to be a big seven-figure offer from Hearn for Ruiz, but it might not be high enough.

A win for Whyte over Ruiz would be huge, especially if he were able to knock him out. That’s something that Anthony Joshua couldn’t do last December in his rematch with Ruiz in Saudi Arabia. Joshua used movement, holding and lot of single shots to crank out a 12 round unanimous decision.

If Whyte can top Joshua’s performance with a KO of Ruiz, it would increase his popularity, and increase his market value for fights against Deontay Wilder and Joshua.

There’s the very real possibility that Ruiz will beat Whyte, and expose him. Whyte hasn’t looked solid for a long time, and the only guys he’s impressed against 2nd tier fighters like Lucas Brown and Malcolm Tann. Those aren’t quality fighters.

If it was just one or those of those fights where Whyte didn’t look good, you could ignore, and blame it on a bad night. The fact that Whyte STRUGGLED in all of those fights suggest that he’s not as talented as casual boxing fans think he is.


« Jose Ramirez vs. Viktor Postol fight postponed due to Coronavirus in China