On the verge of big things – Danny Dignum Interview 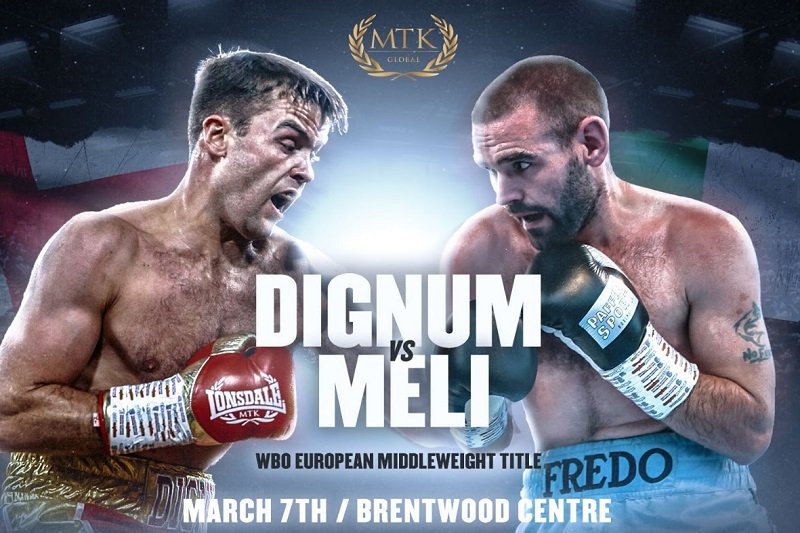 By Ian Aldous: He only found the sport by chance, but Danny Dignum (12-0) is certainly making the most of it. The former amateur standout headlines MTK Global’s March 7th show in Brentwood, Essex when he defends his WBO European title against fellow undefeated pro, Alfredo Meli (17-0-1).

The twenty-seven year-old takes up the story of how it all started. “No-one’s ever boxed in my family apart from me and my brother,” he told me. “We used to keep fighting each other and that’s the only reason we started boxing. My dad was fed up and said, ‘If you want to fight each other then I’ll take you to the boxing gym and you can fight other people’. Him thinking that once we get a punch in the mouth – we won’t like it, I’ve boxed ever since!”

His father spent a lot of time on the road taking his boys to and from amateur fights and it paid dividends with the twins winning plenty of tournaments. “As an amateur, I had roughly 85 fights and I won about 70 of them,” the WBO #14 ranked middleweight said. “I won every national title there is to win. Me and my brother was the first twins to win the Golden Gloves on the same day a weight apart. Me and my twin also won the ABAs at middleweight; he won it in 2011 and I won it 2012.”

The MTK Global- guided southpaw will be favoured to beat Belfast’s, Alfredo Meli on March 7th, live on ESPN+ in the U.S. and IFL TV worldwide and a win will boost his already healthy world ranking with the WBO. “That’ll escalate me,” he exclaimed. “I think he’s a very good fighter. I haven’t watched too much of him yet. I left that to my coach for the time being. What I have seen of him; I think he’s a good fighter. He comes to fight. From the clips that I’ve watched, he didn’t take a backward step. I know he’s going to come and give it his all. Like he said in his interview, because this is for the WBO European, a win could get either one of us up the rankings. It’s going to be a very hard fight, but I’m preparing to the best of my ability. I leave no stone unturned.”

Despite both pugilists possessing undefeated pro records, it’s expected that Dignum will be a level above Meli on fight night. It’s far from a formality, but it’s distinctly possible that Dignum might well reach the upper echelon of the 160lb division by late 2020.

“I know he’s going to come to fight, so I’ll pick holes in him,” he said. “There’s only so much punishment you can take. I don’t care how strong you are, how tough you are, them punches take their toll, especially with the little 10oz gloves on. You can’t physically walk through every single punch.”

Dignum, from Bowers Gifford in Essex, really stepped up a level of competition when he faced the rugged and tough, Conrad Cummings last November. After four rounds of domination, a perfect left-hook separated Cummings from his senses and forced the stoppage of a man who had never previously been beaten inside the distance. It gave us a glimpse of what may lie ahead. “I knew I was in for a hard fight and because I knew I was in for a hard fight, same as this one (against Meli), I trained so hard. I know we all say it, but I’m the world’s worst for cutting corners and cheating; I’m my own worst enemy. I didn’t cut corners and done everything that I had to do. I know this fights going to be even harder again. If I give it 100% and things don’t go my way, I know I gave it 100%. I don’t want to live with regret. I know if I prepare to the best of my ability – there’s not many people out there that’s going to beat me.”

Cummings has been twenty rounds with impending WBO world middleweight title challenger, Luke Keeler. The fact Dignum was able to dispatch him within five rounds speaks volumes of the potential he has. “I don’t like talking myself up, but to realise he’s now boxing for a world title, it’s given me good confidence,” he humbly explained. “I hope that Keeler does well and I hope he wins that fight. Luke Keeler boxed Conrad for the WBO European, vacated it, boxed Luis Arias and now he’s got his world title shot. So, if I can do similar and beat Alfredo Meli, then I get another very good step up and beat him, there’s no reason why that can’t be me. That’s what gives me the confidence.”

The Brentwood Centre is only twenty minutes from Bowers Gifford, so this is as good as a home fight for Dignum, who expects to bring plenty of fans with him to pack out the venue on fight night. “A lot of my support comes from my sponsors. I’ve got some brilliant sponsors and if it weren’t for them, I wouldn’t be boxing. My family and my friends, everyone just wants to see me do well! I’ve ordered 300 tickets and I expect to sell them, easy. I’m eight weeks out and I’ve got a lot of them sold already. I want to take the roof off there with my support!”