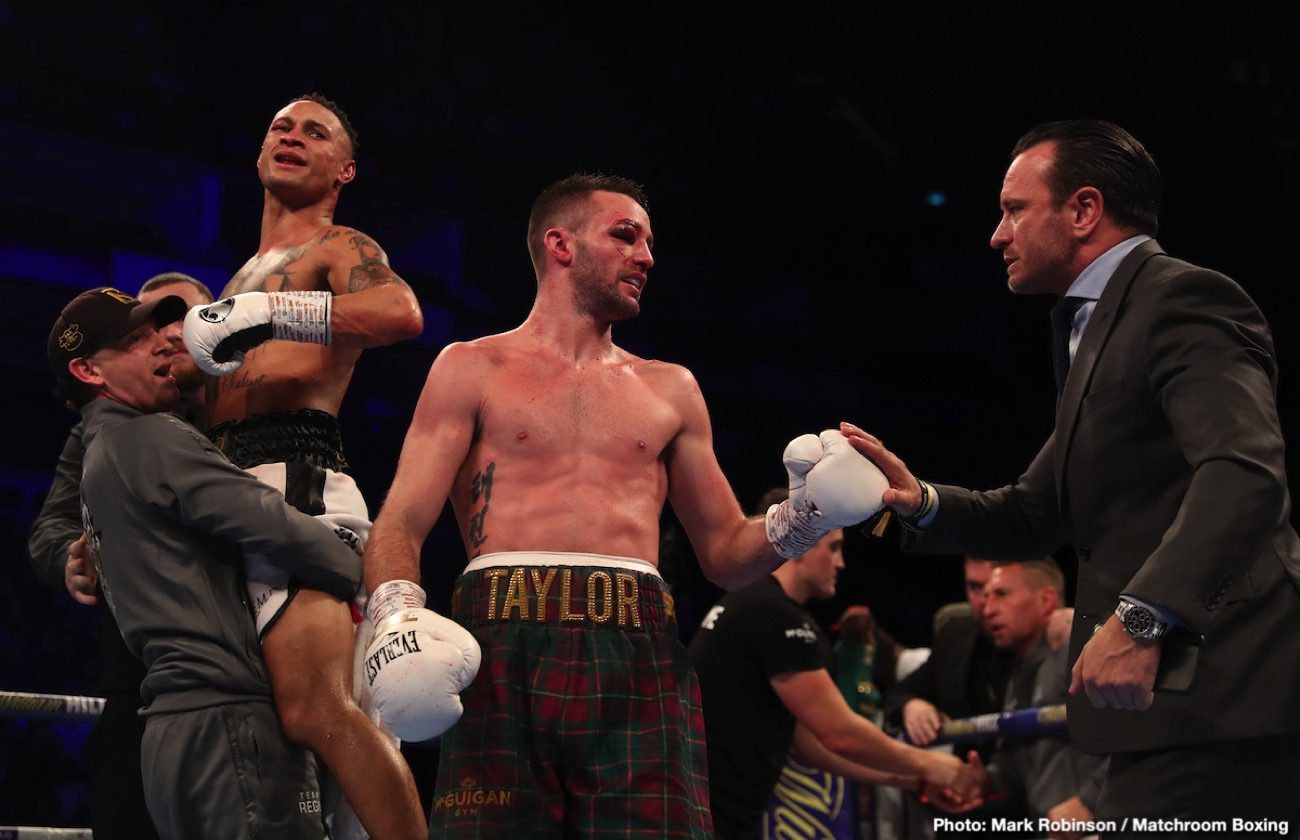 By Chris Williams: IBF/WBA light welterweight champion Josh ‘The Tartan Tornado’ Taylor (16-0, 12 KOs) has reportedly inked a multi-year deal with Top Rank Boxing in the U.S. With the signing, there are 2 fights that will almost surely be available for the 29-year-old Taylor in facing the Top Rank promoted WBC/WBO 140-pound champion Jose Ramirez (25-0 17 KOs) and WBO welterweight champion Terence ‘Bud’ Crawford (36-0, 27 KOs).

It’s pretty obvious why Top Rank has signed the 5’10 1/2″ Taylor to a contract. They want and BADLY need an opponent for Crawford, who is getting older, and needs someone to fight. Sadly, the best guy that Top Rank has put Crawford in with during his time with them is an over-the-hill Amir Khan, and that fight ended on a sour note with a low blow from Bud.

Expect Taylor to be matched against Crawford 3 to 4 times

Assuming that Taylor faces Crawford in the near future, it’s VERY likely that Top Rank boss Bob Arum will look to put those two in with each other a minimum of 3 times. Arum likes to do LOTS of rematches with his Top Rank stable fighters, which is why we saw Manny Pacquiao fight Juan Manuel Marquez 4 times, Erik Morales 3 times, Tim Bradley 3 times and Marco Antonio Barrera 2 twice.

It would be a shame if Taylor’s career is wasted on fighting a guy like Crawford 3 to 4 times. Taylor should be fighting a variety of talented guys, and not just get stuck in an endless rematch cycle with Crawford just for the lack of opposition for the needy Omaha, Nebraska native.

On the plus side, the Crawford fight will make Taylor a lot of money, but it’s a match that he might lose. If Taylor is rushed into a fight with the more experienced Crawford in his first match at 147, it won’t bode well for him.

With Crawford already showing great frustration at having been a professional for 12 years without having even ONE career defining fight, it’s quite possible that Top Rank will hurry Taylor into that match.

Ideally, Taylor should take a year or two to get aclimitized to the welterweight division before taking on Crawford for his WBO belt, but that’s probably not going to happen though. Crawford is about to turn 33, and he seems upset at the big fights having eluded him all these years.

On the other hand, once those two fights are done with for Taylor, he could have 2 years of being in limbo, fighting the likes of Viktor Postol in a rematch that few boxing fans would be interested in seeing. Taylor already beat the Top Rank promoted Postol in 2018, and it would be pointless for him to fight him again.

Taylor has been promoted by Cyclone Promotions, and it’s unclear what the status is with their contract with him. Presumably, Top Rank will likely have checked on that before signing the 2012 Olympian Taylor.

There’s no reason for Taylor to leave the light welterweight division just yet, even though Top Rank likely wants to make the fight with Crawford ASAP. Taylor still has a good 3 to 4 years left at 140 before he exhausts all the great fights for him in this weight class. Crawford will still be around in 3 or 4 years time, and Taylor can fight him when it works best for him, not the other way around.

A message from the champ himself ⬇️