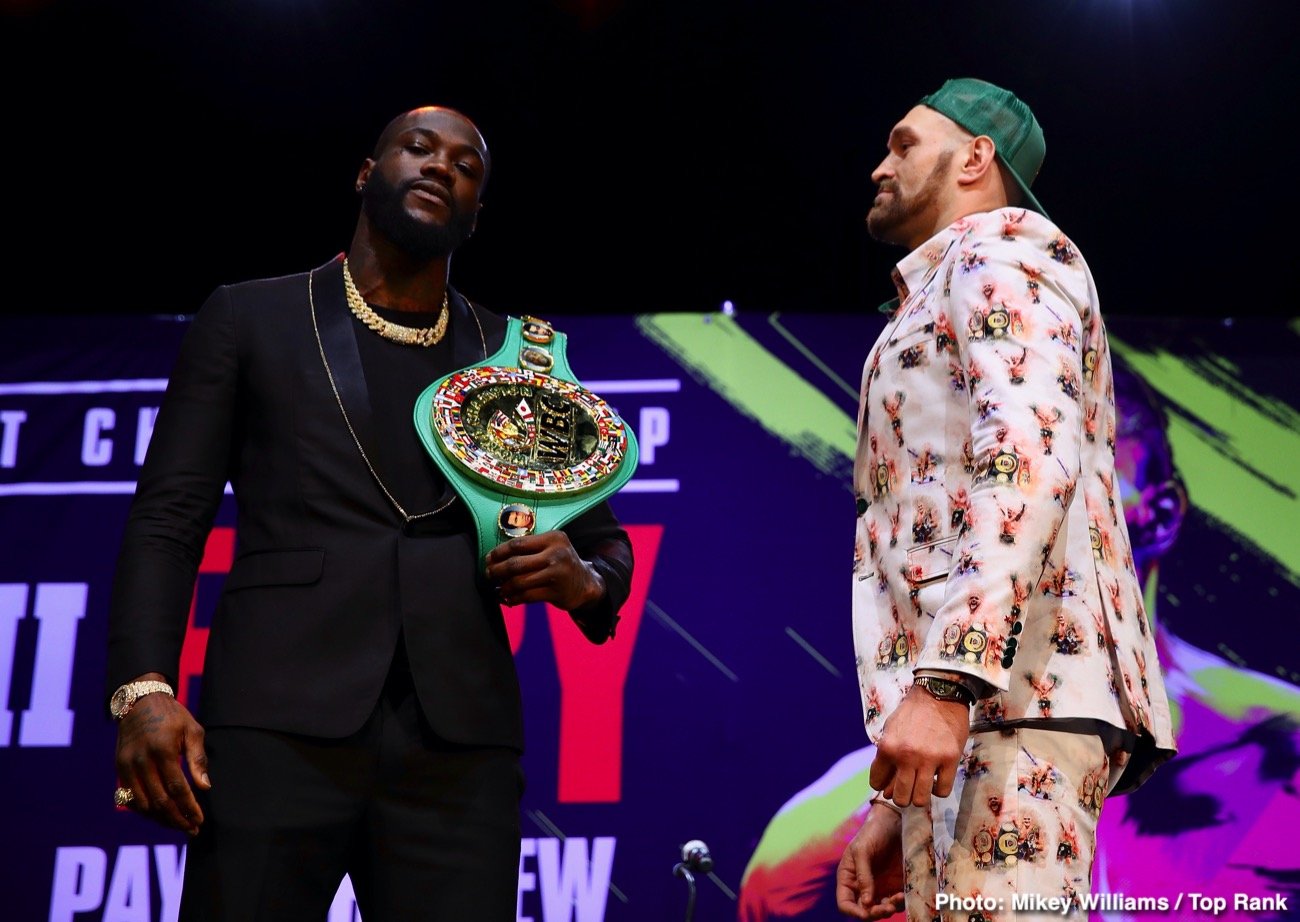 By Chris Williams: It appears that Top Rank boss Bob Arum has changed his mind about the Deontay Wilder vs Tyson Fury rematch not needing press conferences. There’s now a press conference scheduled for the fight on Monday.

Unfortunately, it’s just one press conference, and that’s still far short of what you would expect for a fight the magnitude of Wilder vs. Fury. Arum has been predicting the fight will do 2 million PPV buys. Those are great numbers, but not realistic without press tours to help get the attention of boxing fans.

Arum had recently said that there was no need to have multi-city press conferences or a press tour to market the Wilder-Fury 2 rematch on February 22, but now it looks like he’s changed his mind. There’s a press conference scheduled for this Monday, January 13 in Los Angeles, California.

Some boxing fans believe that Arum’s focus was on nickel and diming the promotion of the Wilder vs. Fury 2 rematch by not having a big promotional tour to drum up interest in the fight.

If there’s just going to be one press conference for the entire Wilder vs. Fury 2 promotion, it might not be enough to get fans interested in the fight. Right now, there’s zero buzz about the rematch. Wilder is invisible, and Fury is doing bizarre off-putting Instagram posts showing himself when he weighed 400lbs and sitting in a hot tub. It’s real pointless stuff, and basically there’s no buzz being created.

Arum recently said there’s no need for news conferences or a press tour for the Wilder vs. Fury rematch, due to his idea of having the two giant heavyweights market the fight during the college bowl games and the Super Bowl. He figured that millions of fans would see Fury and Wilder talking about the fight, and that would be enough.

It was a controversial move that was quickly second-guessed by Matchroom Boxing USA promoter Eddie Hearn, who said he didn’t understand the move by Arum. Hearn says he would definitely doing press conferences and a tour if he were the one in charge of the Wilder vs. Fury rematch.

The problem with having Fury and Wilder talk up their fight during football games is the two were separate, and sitting down instead of on stage. Fury was talking to football guys that had zero knowledge about boxing. It looked silly, and a pure waste of time.

“The fact that he went somewhere else, there’s no bad blood whatsoever,” said De La Hoya on Deontay. “I wish him all the best, and he’s an exciting guy for the heavyweight division. It’s going to be a great fight. Tyson Fury has a great story behind him.

Oscar De La Hoya had Wilder as part of his Golden Boy Promotions stable when he first turned pro over a decade ago, and he quickly won a world title after seven years as a pro.

Wilder probably could have captured a world title sooner. His promoters didn’t work him into a title shot straightaway the way Matchroom did with Anthony Joshua. Nevertheless Wilder had the punching power from day one to win a world title, but it took him seven years before he was given a shot.

“I watched the fight a month ago. Fury won the fight,” said trainer John David Jackson to Fighthype on the Wilder vs. Fury fight. “In rounds, I had him up 8-4, and in points I had him ahead 116-113. The knockdowns closed the gap. The thing is, Wilder in losing those rounds, he let Fury pitty-pat.

“Wilder has got to cut the ring off in this fight,” said Jackson. “He’s got to make Fury engage. If he can do that, Fury will be wide open for a counter shot. He doesn’t have the best defense, but for a heavyweight he’s slick. The thing works for him. It’s herky-jerky, and most guys can’t deal with that.

Trainer John David Jackson feels that Wilder only needs to make a few small changes to his game for him to beat Fury in the rematch. He believes Fury is going to fight the exact same way he did in the first fight in December 2018, because there’s no need for him to change.

Jackson feels that Fury (29-0-1, 20 KOs) deserved the victory last time against Deontay, so there’s no need for him to change anything. It’s Wilder that needs to change, because he can’t let Fury run around hitting him with weak shots, and stealing round.

Deontay can do a lot better in the rematch

“A lot of his shots are wild, swinging shots,” Jackson continued on Wilder. “When he places his shots real good, it works for him. The first fight that I watched with no one around me, I thought Fury won. In the second fight, Fury will do the same thing as in the first fight, because it worked for him. Why change his strategy.

“He would be a fool to try and knock Wilder out,” said Jackson. “Wilder only has to change his game plan a little bit. Cut the ring off, and make Fury engage. Use that jab more. Just anything he can do to offset Fury a little more, and he can win. If nothing else, he proved that, ‘I got the power to knock this cat [Fury] out.’ At least knock him down, but he’s not going to keep him down,” said Jackson in discussing Wilder’s power.

Just by cutting off the ring better, and throwing straighter shots, Wilder can do a lot better in the rematch. Wilder was too slow on his feet in letting Fury control the ring by moving every which way. In the rematch, Wilder will need to show a sense of urgency to go after Fury, because he could get the crowd on his side if he builds an early lead.

Jackson surprised Fury got off the deck in the 12th

“I was shocked when he got up. He got up,” said Jackson about Fury getting up in the 12th after getting dropped by Deontay. “I’m sure he was shocked himself. This fight depends on what Wilder does. You know what Fury is going to do. He’s going to try to get into his head, and do all these things to try and win, and slap him.

“If he even tries to punch Wilder, he’s in trouble, because he’ll be vulnerable,” Jackson said about Fury. “So this fight depends on what Wilder does, and how he approaches this fight, and how he cuts the ring off. Go to the body. He just has to do a couple of things differently, and he can win the fight. But if he does the same things as last time, he might lose a decision this time.

“Who can impose their skill? It’s a 50-50 fight,” said Jackson on the Wilder vs. Fury 2 rematch. “We’ll see who’s the best fighter or the better fighter. The outcome might dictate the third fight. Right now, they’re #1 and #2 in the division,” said Jackson.

A lot of people were shocked to see Fury get up from his 12th round knockdown, because he looked out cold. The way that the referee gave a count to an unconscious Fury, who didn’t stir until the count of 5, looked very strange. It looked like a fight from another era, because referees don’t play it like that anymore.

When a fighter is knocked out like Fury was, referees aren’t willing to take the chance of giving a count. This referee did though, and Fury was saved by his decision.

Joshua did the minimum to beat Ruiz

“He did what he had to do to win,” Jackson said about Joshua in his recent win over Ruiz Jr. in their rematch. “And he beat him in a lowkey manner. He didn’t dominate the way he should have dominated. When he would get hit, he would look to grab and look timid.

“He did what he had to do,” said Jackson in talking about Joshua’s negative performance against Ruiz. “It just wasn’t a dominating performance. He didn’t dominate the way he should have dominated in order to prove, ‘I’m the best heavyweight,'” said Jackson.

Anthony Joshua’s effort in beating Andy Ruiz Jr. in their rematch on December 7th wasn’t enough for Jackson to view him as the #1 or #2 heavyweight in the division. Like many boxing fans, Jackson thinks Joshua was too timid, too negative, and too conversative with his offense to give him much credit.

Thurman reacts to Fury being the FAVORITE over Wilder »