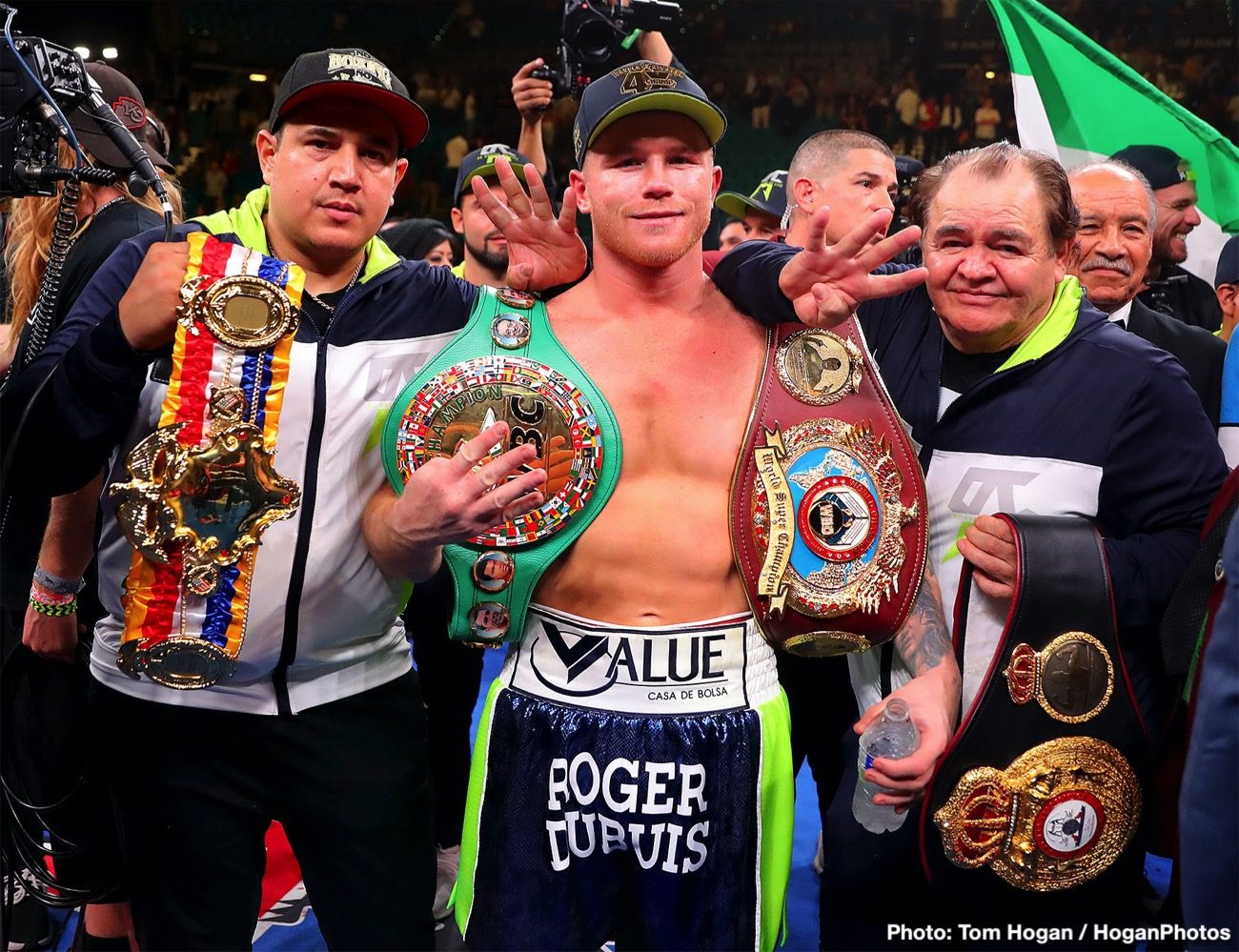 By Dean Berman: In a move 2 years too late, the huge star Saul Canelo Alvarez (53-1-2, 36 KOs) will be looking to add another title to his career credentials in facing WBO super middleweight champion Billy Joe Saunders (29-0, 14 KOs) on May 2. The fight hasn’t been confirmed by Team Canelo, Golden Boy Promotions or DAZN as of yet, but it’s said to be taking place.

According to Mike Coppinger, negotiations will be taking place this week for the Canelo vs. Saunder fight. This will be at 168 with Canelo’s secondary WBA super middleweight strap, and Saunders’ WBO belt on the line.

American boxing fans won’t be too excited at seeing Canelo fight the little known Saunders. This is a fight that one can argue is strictly for overseas consumption. In other words, the UK boxing fans, which is where Saunders is from, will love seeing him face Canelo. People in the U.S want to see Canelo fight these fighters:

Saunders has chased Canelo for 2 years

The 2008 Olympian Saunders has been trash talking Canelo for the last two years, trying to get a fight against him. Now that Saunders has moved up to 168, and won the WBO belt, Canelo appears to be finally ready to fight the 30-year-old British fighter.

There’s a lot of reasons why Canelo will be taking on Saunders next rather than someone that American boxing fans want to see him fight against. Above all, Saunders has the unbeaten record at 29-0, and that counts for a lot for Canelo in impressing the casual fans of the sport. They like to see fighters with unbeaten records, and Saunders certainly has that going for him.

“Sources: Canelo Alvarez has zeroed in on Billy Joe Saunders as his May 2 opponent, and negotiations are expected to pick up during the week toward consummating a deal. Saunders holds a 168-pound title, so a victory would make Canelo a full-fledged four-division champion,” said @MikeCoppinger on his Twitter.

Fans wanted Canelo to stay at 175

Canelo recently moved up to 175, and beat WBO light heavyweight champion Sergey ‘The Krusher’ Kovalev by an 11th round knockout on November 2. Although boxing fans were interested in seeing Canelo stay at light heavyweight to take on the best fighters in the division, he’s decided to move down one weight class to 168. It’s a division in which the 5’8″ Canelo’s limited height and reach would be less of a liability for him.

Canelo’s trainer Eddy Reynoso explained recently why he they choose not to stay at 175 by saying the following to Fighthub:

Fans were hoping Canelo would stay at light heavyweight and take on IBF/WBC champion Artur Beterbiev and WBA champ Dmitry Bivol. Even Oleksandr Gvozdyk would be preferable as opponent for Canelo than seeing him move back down to 168, and face arguably a non-threat like Saunders.

That’s not to say that Canelo wouldn’t have problems in this division against some of the bigger fighters. He clearly would struggle against taller fighters like the 6’2″ David Benavidez, 6’3″ Callum Smith and 6’1″ Caleb Plant. But Canelo is wisely not fighting those monsters. He’s selected the 5’11” southpaw Saunders, who has spent most of his 11-year professional career at middleweight.

Saunders is a finesse type of fighter rather than a puncher, which means the only way he can beat Canelo is by a 12 round decision. As boxing fans have discovered, beating Canelo by a decision has been next to impossible. Even when Canelo appears to lose, like in his fights with Gennadiy Golovkin, Erislandy Lara and Austin Trout, he still comes out of the contests without a loss. For Saunders to have a chance of beating Canelo, he’ll likely have to knock him out. Given Saunders’ KO percentage of 48, he’s going to have a hard time hurting Canelo with anything he throws.

The fact of the matter is, Saunders doesn’t knockout quality fighters. He beats them with his negative style of fighting by being crafty, and making them look bad. You can argue that one of the reasons why Saunders has failed to get the bigger name guys to fight him is his fighting style. Guys don’t want to be made to look bad, and Saunders has made it a point of doing that to them.

Saunders has looked sluggish since moving up to 168

Some boxing fans believe that Canelo chose Saunders over Demetrius Andrade, Golovkin and Jermall Charlo is because of the British fighter’s last 2 less than great performances. In Saunders’ last fight against Marcelo Esteban Coceres, he was losing through the first 10 rounds before stopping the little known fighter in round 11. Saunders looked like he’d aged from the guy that have marveled fans with his impressive 12 round decision over a weight-drained David Lemieux in 2017.

That version of Saunders no longer exists unfortunately. The inactivity, weight gain, and the lack of quality opposition has done a number on Saunders’ skills. Earlier last year, Saunders struggled to beat Shefat Isufi by a 12 round decision to win the vacant WBO super middleweight title. Isufi didn’t look impressive, but it didn’t matter. Saunders was worse.

In the 4th, Isufi caught Saunders with a right hand that stunned him, and had him wobbling around the ring in a drunken state. Saunders likely would have been knocked out if he’d been hurt earlier in the round.