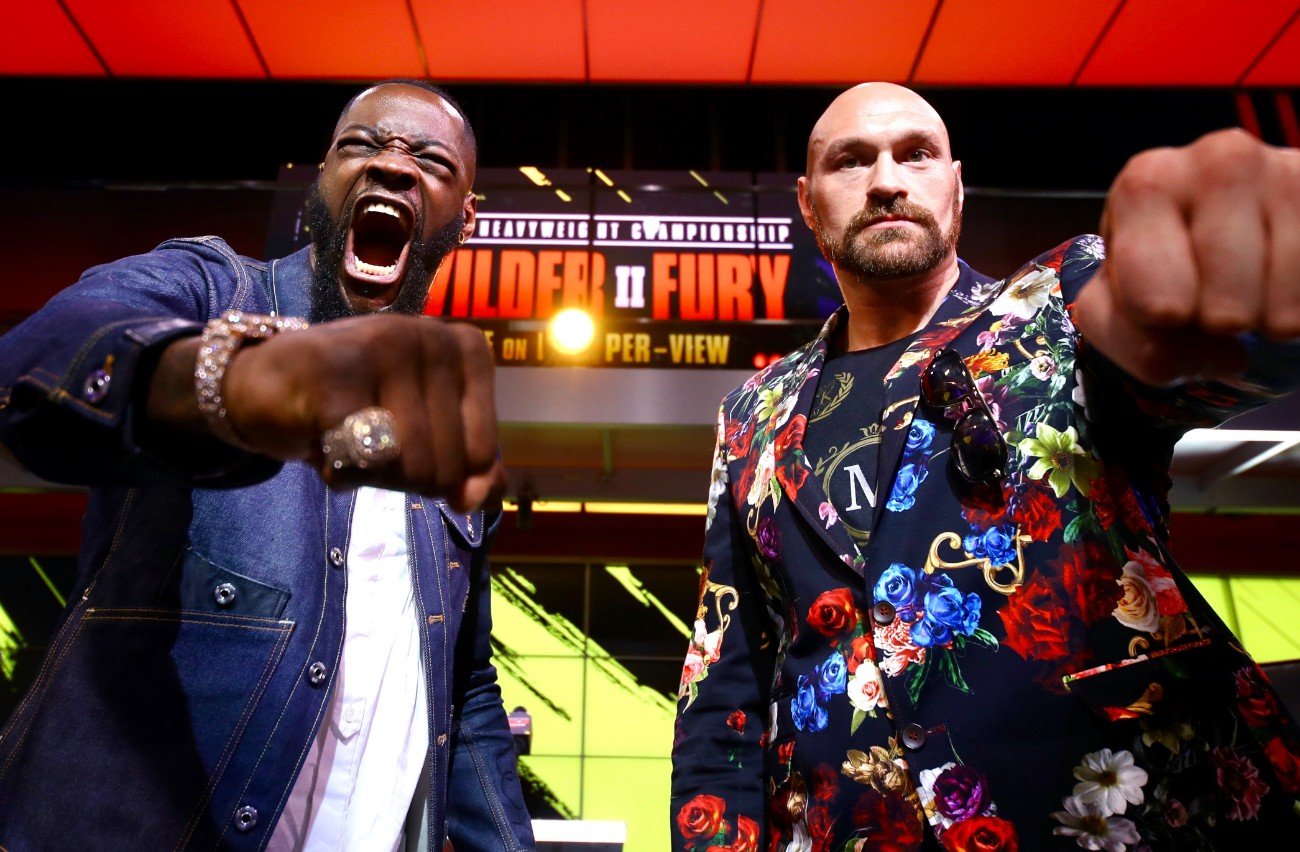 By Scott Gilfoid: Bob Arum says he would be willing to make a fight between Tyson Fury and Anthony Joshua this year, provided that WBC heavyweight champion Deontay Wilder doesn’t initiate the rematch clause in his contract with ‘The Gypsy King’ if/when he loses to him on February 22.

Top Rank boss Arum maintains that a fight between Joshua and Fury would be bigger contest than Wilder-Fury, and he may be right. It would be bigger as far as the UK goes, but obviously not worldwide. Fury isn’t a big name in the United States, unfortunately.

The two soft opponents that Top Rank set Fury up with in 2019, Tom Schwarz and Otto Wallin, failed to impress the American fans. To build a foreign fighter into a star in the U.S, they need to be matched against quality fighters, not guys with inflated records, zero power and little talent.

Chances of Joshua vs. Fury taking place in 2020 = ZERO

For Arum’s grand vision of a Joshua-Fury fight to take place in 2020, it will require a lot of chess pieces to fall perfectly in line in order to make that a reality. At this point, it’s so far fetched that Joshua and Fury will be fighting in 2020 that it’s almost a waste of time discussing this impossible scenario. These are the things that will need to happen for Joshua and Fury to fight in 2020:

“The contract now says that the loser of the fight can demand a third fight, but he has to take 40 percent, and the winner of the second fight gets 60%,” said Arum to @SiriusXMBoxing on the Wilder vs. Fury 2 rematch. “But it’s up to the loser to pull the plug for the rematch.

“If Wilder, being the loser, decides to go in another direction, then Fury will absolutely wind up fighting [Kubrat] Pulev, who will have knocked Joshua out,” said Arum.

It’s hilarious to even contemplate Wilder NOT executing the rematch clause in the contract with Fury should he lose to him on February 22. I mean, why on earth wouldn’t Wilder trigger the rematch clause? For Wilder not to force a third fight with Fury, it would send his career into oblivion.

Wilder’s reputation would be so badly tarnished if he walked away from a loss to Fury without forcing a rematch, it would be hard for him to be taken seriously by fans ever again. As such, it’s a pipe dream on Arum’s part to speculate on a reality that will never happen with Wilder choosing to not force a third fight with Fury. Likewise, Fury isn’t going to let Wilder cruise away into the sunset if he knocks him clean out on February 22nd.

Yeah, in some ways it might be smart for Fury to walk away without forcing a third fight with Wilder, because he could avoid being knocked cold in consecutive fights. Actually, it would be three consecutive fights in which Fury was knocked unconscious by Deontay, since he was already knocked out by him in their first fight in December 2018.

Joshua will do his part to get Fury fight

Fury just lucked out with the referee Jack Reiss giving him a count while laid on the canvas catching some z’s in the 12th. Fury isn’t the type to just walk away after he gets blasted out. Clearly, Fury is going to trigger the rematch clause and gamble big time that he spoil his way to an ugly 12 round victory.

There’s no issue with Joshua defeating the slow 38-year-old Pulev (28-1, 14 KOs), who has very little power. That’s the EASY part. You hate to say it, but Pulev would likely lose to almost any of the top 15 contenders in the heavyweight division at this point in his career. But the hard part of Arum’s dream scenario if the light hitting 6’9″ Fury (29-0-1, 20 KOs) beating Wilder on February 22.

Joshua has the easiest part in all of this. All he has to do is beat up heavyweight Pulev, and he’s in a position to potentially fight the Wilder-Fury 2 winner. Goodness knows why the International Boxing Federation sanctioned a fight between Pulev and Hughie Fury as an IBF title eliminator in 2018.

The IBF basically lobbed a softball to Pulev for him to hit it out of the park in letting him fight Hughie in a title eliminator. Gosh, there are arguably so many better heavyweights in the division than the 6’6′ Hughie, who can’t punch and struggles when facing good opposition. It would be interesting to know what the IBF’s rationale was in sanctioning the Pulev-Hughie fight as a title eliminator, because it was such a poor fight.

“If Joshua beats Pulev and Fury [assuming he beats Wilder] is available because Wilder hasn’t triggered the third fight, absolutely I would do Fury and Joshua. It would be the biggest mega fight, even bigger than Wilder and Fury.”

Wilder already bounced Fury off the canvas like a basketball in their first fight, and was seen as being given a raw deal in the eyes of some boxing fans, who thought Tyson given a long count by referee Jack Reiss. Wilder has improved since the first Fury fight, and taken far better opposition. While Fury has been carefully matched by Top Rank against soft touches Tom Schwarz and Otto Wallin, Wilder has had to run the gauntlet against the dangerous Luis Ortiz and Dominc Breazele.

NEWS:   Dillian Whyte could lose out on Tyson Fury fight

While Wilder has been getting better, Fury is looking like he’s deteriorating. Wallin, who can’t punch, had Fury staggering and holding on for dear life in the 12th. Otto brained Fury with a peach of a left hand in the 12th that put him in bad shape. Wallin should have been able to finish Fury, but he let him grab him to run out the clock.

Deontay brilliantly stopped both fighters in short order, and looked sensational. I wish I could say the same thing about Fury, who looked gawdawful in struggling to defeat Swedish heavyweight Wallin (20-1, 13 KOs) by a 12 round unanimous decision last year on September 14 in Las Vegas, Nevada. Wallin, 6’6″, ripped opened up a humongous cut over Fury’s right eye, and had him bleeding all over the place in the 3rd round.

To say that the fight should have been stopped straightaway is an understatement. Gilfoid was worried for Fury due to the amount of blood that he lost. The canvas had blood everywhere, and only the ringside doctor knows why he chose not to stop the contest. After the bout was over, Fury needed 47 stitches to close the wound. He looked like he’d come out of a war zone, and gotten the worst of it.