By Robert Addams: A fight between big heavyweights Adam Kownacki and Dominic Breazeale is close to being done for March 7 at the Barclays Center in Brooklyn, New York, according to @BorekMati. This is a good match-up between 2 two powerful but badly flawed fighters.

This is a gamble on Kownacki’s part in taking on Breazeale, because he lacks the talent and the amateur background of the 2012 Olympian. Obviously, the idea is for Kownacki to take advantage of a guy that is coming off of a 1st round knockout loss to WBC heavyweight champion Deontay Wilder last May. However, Kownacki doesn’t possess Wilder’s punching power, size or talent.

As such, it may be a mistake on Kownacki’s part to take on Breazeale, because it’s a fight that he could lose. With Kownacki’s high ranking, he’s on the doorsteps of a big money world title shot. Breazeale could ruin those plans if he can beat the 30-year-old Polish fighter.

If the Breazeale fight is made, this would be Kownacki’s fourth former Wilder knockout victim in the last two years of his career. Kownacki has previously beaten the following former Wilder opponents:

It’s unclear why Kownacki’s management has been matching him against Wilder’s past opponents, but perhaps they want to have the fans compare the performances of the two. Wilder did a much better job of beating those three than Kownacki has.

Breazeale was obliterated by Wilder after walking into a right hand, and it was over in an instant. In taking on Breazeale, Kownacki would be looking to take advantage of his recent knockout loss by catching him at a vulnerable point in his career. Kownacki doesn’t have the same kind of size, power or the speed of Wilder though, and he may not be able to destroy Breazeale in the same way.

If Breazeale is able to hang around for 12 rounds against Kownacki, he could beat him. Kownacki has struggled recently in fights against Charles Martin and Chris Arreola, who arguably are his toughest opponents to date. He barely better than those guys, which is shockingly sad for a fighter with the amount of hype that Kownacki has.

The 30-year-old Kownacki, who goes by the nickname ‘Babyface,’ is coming off of a grueling fight against Chris Arreola last August. Kownacki won the fight by a 12 round unanimous decision, but he took a career’s worth of punishment in that fight. The two heavyweights set a CompuBox record by throwing a combined 2,172 punches in the fight.

Yeah, many of the shots were arm punches, but a lot of them weren’t. Arreola was putting hands on the slow, heavy Kownacki. The big punching Arreola threw 1,125 punches in the 12 round fight. That’s an absurd amount of shots for a heavyweight to throw, but it shows that he had someone was standing directly in front of him that he could tee off on.

The timing for Kownacki to be facing Breazeale is bad. Coming off of his way with Arreola, it would be better if Kownwacki were fighting someone with less talent. That’s not to say that the 34-year-old Breazeale is a big time player at heavyweight, because he clearly isn’t. However, the timing of Kownacki taking a step up fight against Breazeale is bad given the grueling fight that he’s coming off of against Arreola.

Some boxing fans feel that this is a matchmatch favoring the Poland-born Kownacki (20-0, 15 KOs), but that might not be the case. The 34-year-old Breazeale (20-2, 18 KOs) has only lost twice in his eight-year professional career, and that was to world champions Anthony Joshua and Deontay Wilder.

Those are fighters that would almost surely beat the ponderous 260+ lb Kownacki, who is like a slow, plodding version of the chubby Andy Ruiz Jr. When you take away Ruiz’s hand speed and combination punching, you’re left with Kownacki.

Breazeale will have a decent shot of winning this fight if he can use his 6’7″ size to box the shorter 6’3″ Kownacki from the outside. If Breazeale stands in front of Kownacki though, he could get stopped.

Although Kownacki is still undefeated, and highly ranked, he’s never beaten anyone good during his 10-year professional career. The reality is, Kownacki has been matched in careful manner by his promoters and management, and they’ve not put him in with a solid heavyweight as of year. What’s disappointing is Kownacki has been a pro for 10 years, and yet he still hasn’t fought his first quality heavyweight.

Kownacki struggled BADLY in barely beating former IBF heavyweight champion Charles Martin by a 10 round unanimous decision in September 2018. The scores were 96-94 x 3. To say that Kownacki was exposed by Martin is an understatement. He was exposed in a ridiculous manner, and you can argue that the fight should have been scored a draw if not a win for Martin.

The best wins of Kownacki’s career have come against these fighters:

Unfortunately, those are the only names that Kownacki has on his 10-year resume as professional. The rest of the guys that Kownacki has fought have been obscure fighers that few boxing fans, even the hardcore ones, have ever heard of.

Taking on Kownacki in his first fight since his knockout loss to Wilder would be a risky gamble on Breazeale’s part. Normally when fighters suffer shocking knockout losses the way that Breazeale recently did, they come back against a soft opponent, not a high volume puncher like Kownacki.

The fact that Breazeale is considering taking this fight suggests that he views Kownacki as someone that he can beat. He may be right. Kownacki looks to be on the same level as Arreola talent-wise, and he’s very beatable by Breazeale any halfway decent heavyweight in the division.

The question is, can Breazeale handle a fighter that is capable of throwing over 900 punches in a 12 round fight? Breazeale doesn’t have the best set of wheels for a heavyweight, and he would need to be able to move a lot to keep from getting hit so often. The good news is Kownacki’s punches are incredibly slow, and his power diminishes badly in the second half of his fights.

Against Arreola, Kownacki was throwing arm punches by the mindpoint in the fight, and he looked completely exhausted. His arms were like rubber. It was lucky for Kownacki that Arreola lacked the explosive power to take advantage of his exhausted state, because he would have been in trouble against a good heavyweight. 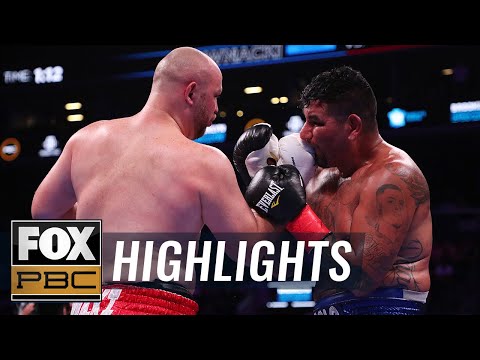