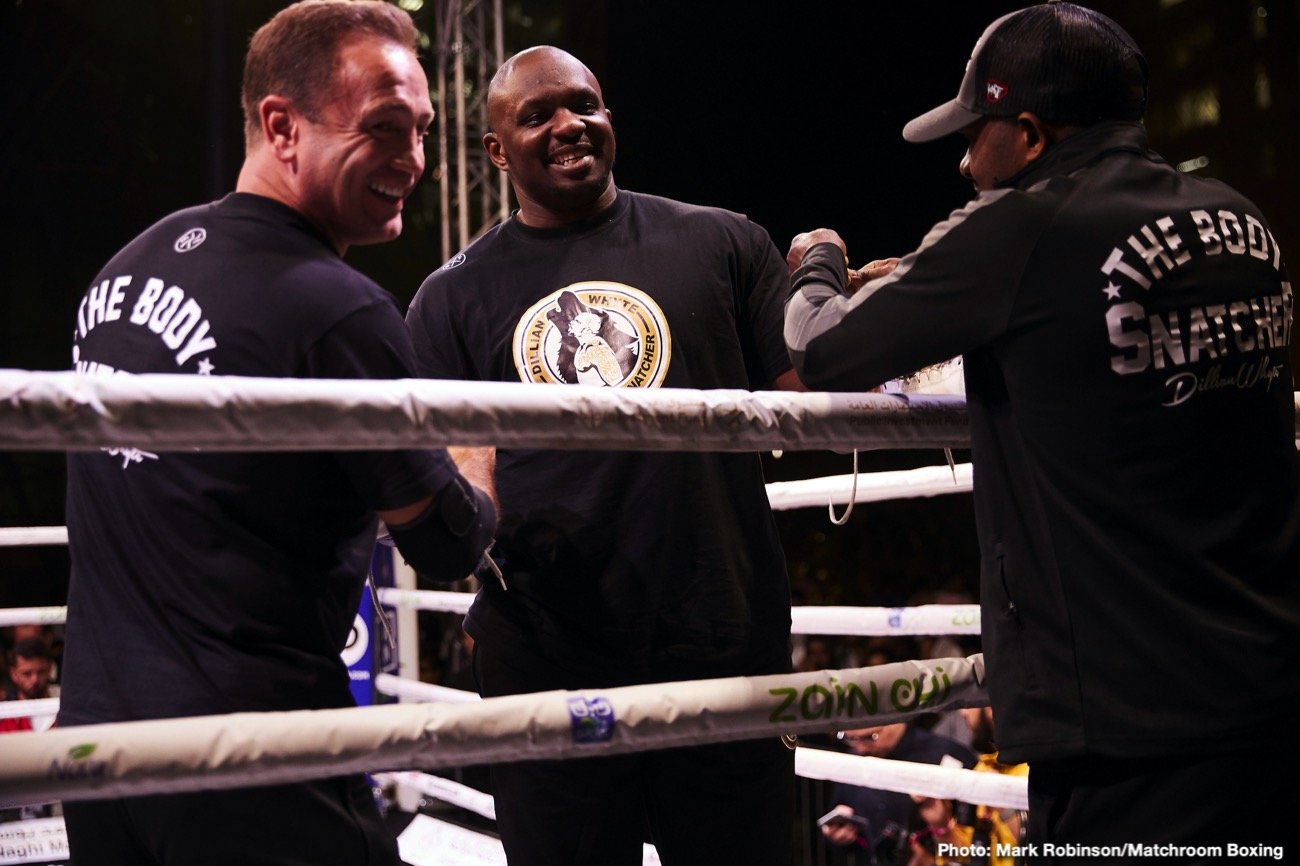 By Tim Royner: Dillian Whyte is still not unhappy with WBC heavyweight champion Deontay Wilder due to him not giving him the world title shot that wants, and he feels he’s earned it with his #1 ranking. Whyte (26-1, 18 KOs) wants to fight for a world title in 2020, and he also is hoping to face Anthony Joshua, Oscar Rivas and Joseph Parker in rematches.  He wants a lot of things to happen next year, but unfortunately, there’s no guarantee that any of those fights will take place.

UKAD still hasn’t released the results of Whyte’s B-sample from his last fight with Rivas. If the B-sample does come up positive for PEDs, then it’s highly unlikely that Whyte will get fights against Wilder, Joshua, Parker and Rivas anytime soon.

Whyte, 31, is fighting former heavyweight world title challenger Mariusz Wach (35-5, 19 KOs) this Saturday on the Joshua vs. Andy Ruiz Jr. 2 card at the Diriyah Arena, in Diriyah, Saudi Arabia. It appears that Whyte isn’t aware that his match against the 39-year-old Wach ISN’T the co-feature bout.

The co-feature is the heavyweight bout between Alexander Povetkin vs. Michael Hunter. However, perhaps Matchroom could choose to change the order of the undercard if Whyte leans on them. The problem is Whyte vs. Wach is a mismatch.  It’s not expected to be a competitive fight, and there’s not much interest from boxing fans in this. They view the fight as a poor one thrown together by Eddie Hearn at the last minute.

“I told him to be focused, go out there and do your job, get the belts back, and let’s go have a proper dust up,” said Whyte in revealing what he said to Joshua during their brief meeting during the media workout.

“You can feel when someone really appreciates. I could have told him he’s a ‘big, stiff git,’ like the other guy said. I understand it’s a business. Andy Ruiz winning is good for me, because I think Andy Ruiz is a much easier fight for me than Joshua is. But it doesn’t make for a bigger fight than me and Joshua is, you know?

“For selfish reasons and for being a patriot for my countrymen, I want to see him win for those reasons,” said Whyte about Joshua.

Whyte could have already had a rematch with Joshua earlier this year, but he turned down the offer. So instead of facing Joshua, Whyte fought Oscar Rivas, and beat him by a 12 round decision. Rivas dropped Whyte in the 9th, and had him on the verge of a knockout in the 12th. The referee arguably saved Whyte when he gave him a time out.

Dillian doesn’t want to wait until 2021 to fight Deontay

“I think Wilder is scared,” said Whyte in which he hasn’t been given a world title shot against Deontay Wilder. “It can’t be the WBC. It must be Deontay Wilder saying he doesn’t want to fight me, and I don’t deserve a shot. I’m not happy waiting to 2021, I’m not, but what can I do. Let’s see. I’m just going to start doing a Shannon Briggs on him by showing up at places, and shouting, ‘Let’s go bum.’ What more can I do?

“I’ve been waiting for so long. I got there, and now it’s been pushed back again. Am I going to get old [before getting a world title fight] or if I’m going to be mentally unstable? Probably a third fight with Luis Ortiz,” said Whyte when asked what happens after Wilder faces Tyson Fury in their rematch on February 22. “Maybe he’ll fight [Eric] Molina if he wins on Saturday [against Filip Hrgovic], and he has a second fight with him.

Unless Wilder chooses to give Whyte a world title shot out of the blue, Whyte will need to wait until 2021 or perhaps later than that. Wilder and Tyson Fury could face each other twice in 2020, and there’s also a possibility of Deontay facing the Joshua-Ruiz 2 winner.

“Name me 4 guys that Luis Ortiz fought just off of your head,” said Whyte. “Because he’s fought no one. He’s a great Cuban with 400 amateur fights. He had 2 world title fights in his 60s. He’s never won a world title. He’s garbage. Name me 4 guys that Dereck Chisora has fought. And I beat Chisora. He’s got a way better resume than Luis Ortiz.

“We’ve been trying to make that fight. He says no one wants to fight him. He’d rather fight Dave Allen rather than fight me at that time. I was the first one at Matchroom that said, ‘I’m ready. Let’s go, King Kong.’ Wilder said, ‘If he wants to fight me, he has to fight Luis Ortz.’ What the hell? You’re not the WBC ranking. I’m #1, and I’m WBC interim world champion,” said Whyte.

One major reason why Whyte didn’t get credit for knocking out Dereck Chisora was how the fight played out. The referee Marcus McDonnell had just deducted a point from Chisora for him hitting Whyte with an elbow. This was the second point deduction for Chisora in the fight, and it looked to some like he was being singled out. Whyte was roughing Chisora out, and he didn’t have points deducted.

“He’s [Wilder] fought two top 10 fighters in a million years, and both of them were Luis Ortiz. That and Tyson Fury. He’s fought no one in the top 10. I’ve fought more guys in the top 10 than Deontay Wilder has done as a champion. Deontay Wilder didn’t show nothing that we didn’t already know.

“We know he’s got a good right hand, and that’s it. He showed that he can be out-boxed, and he can be hurt. If Usyk wants it, he can get it. Deontay Wilder is the most destructive heavyweight puncher. I’m the only guy that seems to want him,” said Whyte.

Wilder has fought the following top heavywweights during his career:

These are the top guys Whyte has fought:

Dillian’s victories over Rivas and Parker were obviously tainted due to blown calls by the referees that worked those two fights. In the Parker fight, Whyte was given credit for a knockdown in round 2 after he bumped heads with Parker.

The referee Ian John Lewis failed to notice that it was Whyte’s head colliding with Parker that resulted in the knockdown. Additionally, Whyte got away with a lot of rough-house tactics that likely would have resulted in him losing points if there was a different referee working.

In the Whyte-Rivas fight, the referee stopped the action after Rivas hurt Whyte with a body shot in round 12. He thought that it was a low blow that had hurt Whyte, but it unfortunately for Rivas, it was a clean shot to the body. The referee gave Whyte time to recover, and that arguably saved him from being either knocked down or stopped.

“I hope his head is in the right space, because if it’s not, he’s going to have problems,” said Whyte about Joshua in his rematch with Ruiz this Saturday. “Hopefully, Ruiz has been doing what people are saying he’s doing in living the life. Joshua will then just go clean him up. Being leaner doesn’t mean fitter. It seems like the fat man [Ruiz] is ruling the world at the minute.

“Maybe I should start eating cheeseburgers, and stop trying to lose weight. Just be a real fat man with fast hands. You think I should be the chief support? Hopefully, Whyte fights Joshua 2 next year. I hope the kid [Joshua] gets his belts back, and then says he wants to fight Ruiz again,” said Whyte.

Like a lot of boxing fans, Whyte believes Joshua’s loss to Ruiz last June was a result of him not being focused. Unfortunately, that’s probably not the reason why Joshua lost the fight. It wasn’t a problem of Joshua not being focused.

That wasn’t it. Joshua couldn’t handle the combination punching, the speedy pace, and the overall boxing skills of Ruiz. Joshua not being focused isn’t why he lost to Ruiz, and won’t be the reason he loses the rematch on Saturday. Sometimes a fighter meets his match, and that’s how it goes.

Dillian might not get a world title shot anytime soon

Whyte says he wants Joshua to beat Ruiz because a fight between them would be bigger,  but he may not get what he wants. It’s highly unlikely that Ruiz (33-1, 22 KOs) is going to give Whyte a voluntary world title shot, especially with the UKAD results of his B-sample not having been released.

If Whyte is going to get a title shot, it’ll have to be against Wilder, and that won’t happen until 2021. It may not even happen then if Whyte’s B-sample tests positive for PEDs.