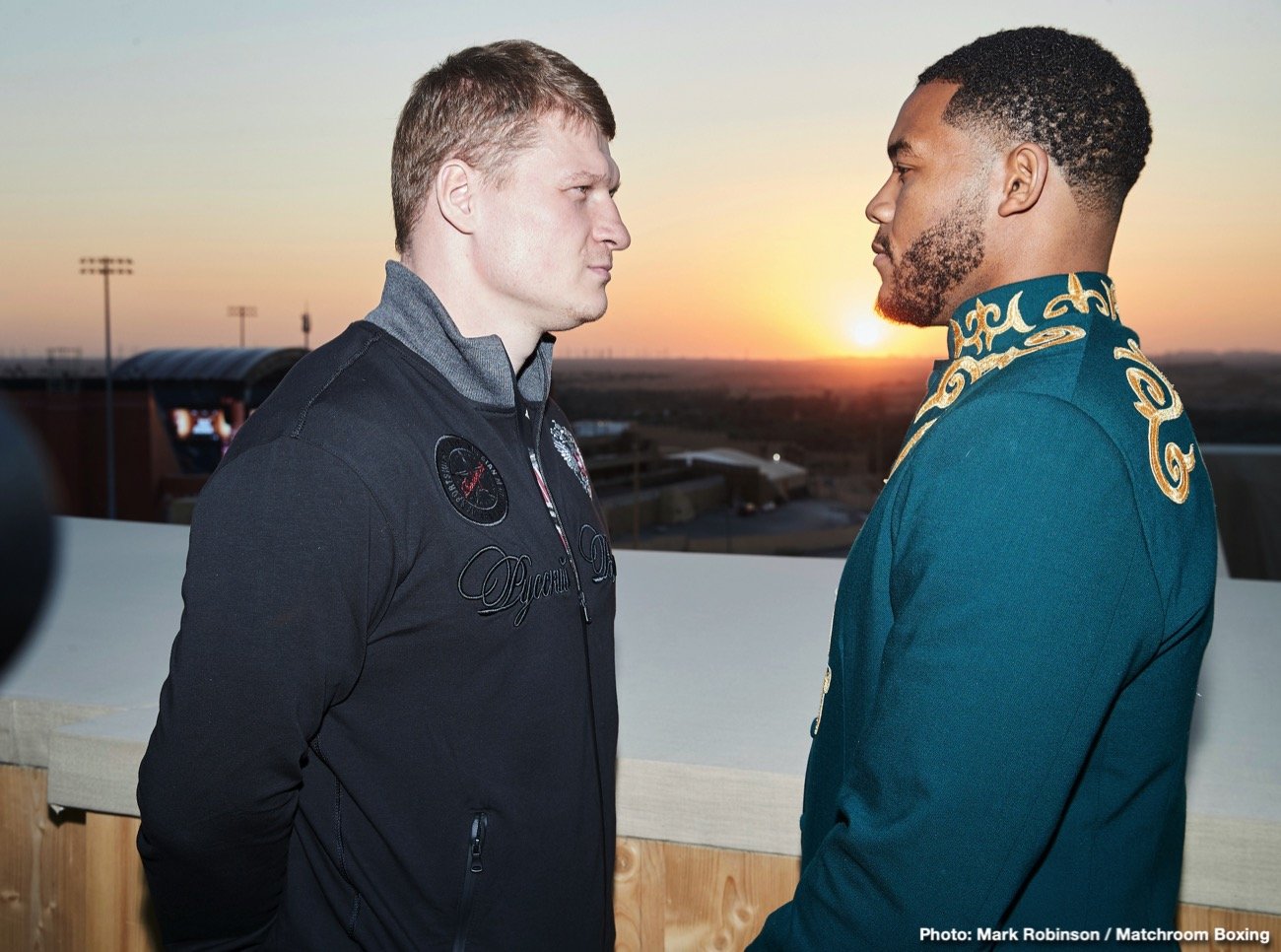 By Robert Addams: Michael Hunter has two goals for his fight against heavyweight Alexander Povetkin on Saturday night Diriyah Arena, in Diriyah, Saudi Arabia. Hunter’s first goal is to knockout the former WBA heavyweight champion Povetkin (35-2, 24 KOs) to further his career goals, and help him get pushed up the rankings.

The second goal for the 31-year-old Hunter is to steal the show from all the other fighters on the card, including the main event bout between Anthony Joshua and Andy Ruiz Jr. Hunter (17-1, 13 KOs) has a better than fair chance of accomplishing at least one of his goals in stealing the show, as the undercard is horrible once you get passed the Povetkin-Hunter fight.

Knocking out Povetkin is going to be difficult for Hunter, due to the fact that he’s not a huge puncher. Povetkin has only been stopped once in his career, and that was against Joshua last year.

Andy Ruiz sparred with Hunter to train for fight

“Staying focused. There’s not much more you can do with a Lamborghini,” said Hunter to Boxing Social about him staying ready for his fight with Povetkin on Saturday. “This is nothing new to me. I’ve been all over the world in amateur boxing, and it’s pretty much the same ordeal. this is a dream of mine to fight all over the world.

“I’m just here to perform and do my best. It went well. I was sparring Andy Ruiz, and there’s no better sparring partner to get ready for Povetkin. The preparation went well. We went, and we were in California training like man men, and everything went so smoothly. I couldn’t have asked for a better training camp to be honest,” said Hunter.

The sparring that Hunter got for this fight with Ruiz Jr. could prove immensely valuable for him, given that Povetkin, 40, isn’t nearly as fast, and he doesn’t throw combinations like him. It’s going to be a lot easier for Hunter to track Povetkin’s slow punches on Saturday compared to what he’ s accustomed to facing with Ruiz.

Hunter did well to volunteer to help Ruiz train for his rematch with Joshua, because he could have chosen to just spar regular sparring partners. Instead, Hunter asked Ruiz Jr. if he needed help with sparring, and he agreed.

You can argue that Hunter got more out of the sparring than Ruiz Jr. did, because he’s about the same height as the 6’2″ Povetkin. Ruiz is fighting the 6’6″ Joshua, and it didn’t help him sparring with the 6’2″ Hunter. Andy would have been better off sparring with taller guys in the 6’5″ range at the very least.

Hunter wants to steal the show on Saturday

“I look to see a desperate version, a guy that is at his best, because of what people have said,” said Hunter about Povetkin. “They think he has fallen off, even though he just beat someone that is 24 [Hughie Fury]. So I think that plays a factor in it. I think we’re going to see one of the best Povetkins.

“So we’re looking to annihilate and destroy all his plans and determinations. I see me stopping him. That’s my goal, and my other goal is to compete with all the other guys on the card. So I hope to steal the show, and put on a great performance.

“They can talk about me in the future, and I can get bigger, and better fights, and continue on with my journey. I’m focused on what I’m doing. This is my time, and that’s what I feel,” said Hunter.

For Hunter to get his name out there, he’s got to do his best to steal the thunder from the all the undercard fighters, as well as the headline attraction between Joshua and Ruiz.

Here are the fighters Hunter will be competing with for the top spot:

“I’m looking to steal the show. I always compete with everyone on the card. I’m looking to perform at my best, and I’m the co-feature. That’s already showing me what position I own, and my responsibility to pump the card up. But I plan on stealing the show. That’s my ultimate goal,” said Hunter.

It makes sense for Hunter to go for the knockout in this fight, because it’s too dangerous to keep a guy like Povetkin around for a full fight. He hits hard enough to end the fight at any given time, and Hunter can’t leave a guy like that out there.

The ultimate way for Hunter to compete with everyone on the card is to make sure that he stops Povetkin inside the distance.

Joshua’s mentality will be a factor in Ruiz rematch – Hunter

“It’s really hard to say,” said Hunter when asked how the Anthony Joshua vs. Andy Ruiz Jr. rematch plays out. “And it depends on Joshua’s mentality, and where his head space is right now. Like I said, I’m zoned in right now. We’ll see. I worked with Andy, and we had a great camp. It’s hard to go against the champ,” said Hunter.

It’s hard to believe that Hunter isn’t saying that Ruiz will win the fight, because he spent all that time sparring with him during their camps. The question is did Hunter get the better of Ruiz during their sparring sessions or not? If so, then that might help explain why he’s so reluctant to tell the boxing media that he believes Ruiz will win the rematch with his combinations and power. Who knows? We don’t know if Ruiz got the better of Hunter or if it was the opposite.

Povetkin: Hunter is nothing special

“He’s a world class fighter. I don’t think nothing special, but I expect a good fight,” said Povetkin to Boxing Social in talking about Hunter “This is my goal to become a heavyweight world challenger, and win a world title. Joshua should do it like homework, and go through his mistakes. But I don’t think Ruiz will miss this opportunity to win again,” said Povetkin.

Hunter is certainly a big step up for Povetkin in comparison to his last fight against Hughie Fury last August. Hughie’s resume is thin as far as win over quality opposition, and yet he keeps getting chances for important fights.

Povetkin has faced only one good fighter in the last five years, and that was Joshua. Although Povetkin staggered Joshua at one pint in the fight, he ended up getting knocked out in the 7th.