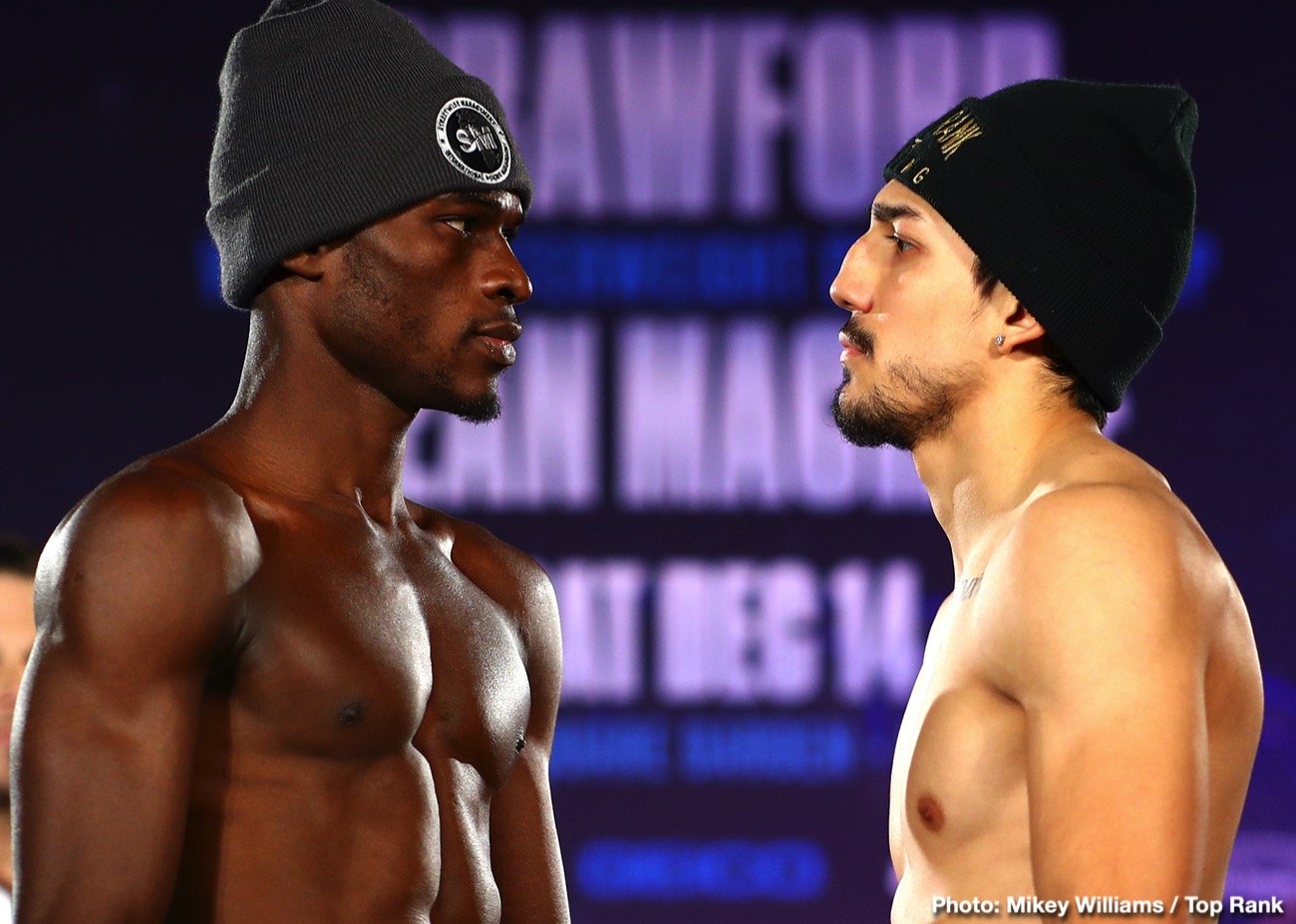 Top Rank Boxing is trying to build the young 22-year-old Lopez into the next Canelo Alvarez, according to Teddy Atlas, and tonight’s fight will identify if he can be that guy.

Atlas believes that Lopez will be a tool for Top Rank to help build the ESPN+ app by increasing the subscriber base with his charisma, and explosive knockouts. If the New Yorker Lopez wins tonight, Top Rank will match him next against WBA/WBC [F]/WBO lightweight champion Vasiliy Lomachenko in the first half of 2020. A victory for Teofimo against the talented two-time Olympic gold medalist Lomachenko will send his popularity skyrocketing.

Commey vs. Lopez is the chief support on tonight’s Terence Crawford vs. Egidijus Kavaliauskas card on ESPN+.

Atlas: Top Rank sees Teofimo as the next Canelo Alvarez

“Arum and Top Rank want Lopez to win BADLY,” said Atlas on THE FIGHT with Teddy Atlas. “In this case, it’s a business. Part of what Arum brought to the table to make the deal with ESPN was that they would be able to build the app with boxing. Arum and Top Rank with Lopez. Look at this kid. He’s 22, he’s a good talent, and he’s a puncher, he’s charismatic.

“And he’s electric, and he gets in the ring and knocks guys out. He’s something you can sell, but he’s one other thing,” said Atlas in continuing to talk of Teofimo. “He’s Latino. Obviously, he’s Latino, and he’s got a Latino following. And everyone wants to find the next Canelo. everyone wants the next Canelo, because he brings that great Latino following, and that great Latino audience, and that means pay-per-view numbers, baby. And that means the [ESPN] app, and maybe new subscribers.

“So they [Top Rank] look at Lopez as a possible next Canelo. As we see, Canelo is the King, but maybe [Lopez] is the heir to the throne, and being able to bring that audience because of what I just said. He’s [Lopez] charismatic, he’s electric, he’s got power, and he knows what to say. He knocks a guy out, and does a backflip,” said Atlas about Teofimo.

Canelo Alvarez had a super long period where he was put in with a lot of older fighters, and fringe level guys before he was eventually put in against quality fighters.

But even now, Golden Boy Promotions is still matching Canelo against older fighters like Sergey Kovalev and Gennadiy Golovkin. What Top Rank is attempting to do is putting Teofimo in with champions while they’re still live, and not old and missing a few steps.

Lopez can help ESPN build up their app – Atlas

“But if Lopez wins, they can build him up with the Latino audience in bringing it over to them, and help them with the apps, and make the executives at ESPN hear what they want to hear, and see what they want to see hopefully. But they can also make a marquee fight between him [Teofimo] and Lomachenko,” said Atlas.

The problem with Top Rank using Teofimo to try and build their ESPN app is the fact that he’s going to need to face Vasiliy Lomachenko next if he wins tonight. To beat a guy like Lomachenko, it takes experience. Only one guy has beaten him, and that was veteran Orlando Salido.

Teofimo with a lot on the line

There’s a good reason why a lot of people are picking Commey to win this fight, and that’s his proven experience in the past. He’s already shown that he can beat excellent fighters, and he doesn’t get flustered when his opponents start hitting him back with hard shots. Teofimo came unglued in his last fight against Masayoshi Nakatani when the Japanese fighter didn’t get blown out immediately.

Teofimo needs to be ready for a 12 round fight

When Lopez discovered that he wasn’t going to be able to destroy Nakatani, he looked uncomfortable, and completely out of his element. The judges gave Teofimo a 12 round unanimous decision by wide scores, but the fight looked more like a draw. If that had been a bigger puncher than Nakatani, Teofimo likely would have been knocked out.

Commey has never been knocked out before, and he’s not likely going to have problems taking the power shots from Teofimo tonight. As long as Lopez is ready for a 12 round battle, he should be okay.

Commey has been hurt before

“The thing about the losses [for Commey] is #1, he lost. #2, he got hurt, and he was hurt pretty badly,” said Atlas. “Guess what? Lopez can hurt you, and one thing about Lopez. He’s got power, and he’s explosive. He’s got that component that I don’t give to everybody, that explosiveness. He closes the gaps real fast. I see that ability in Lopez where he can close those gaps really quickly like Pacquiao.

Richard Commey has only lost twice

Commey has past losses to Denis Shafikov and Robert Easter Jr. in a pair of 12 round split decision defeats. Those were both VERY close fights that could have gone either way. It wasn’t as if Commey was totally dominated by Easter Jr. and Shafikov. Those were both grueling fights where both guys got hurt. Lopez is going to need a good chin, and a strong resolve for him to be able to hold together with the kind of punishment that he’s going to be expected to take.

Shafikov and Easter Jr. were both hungry fighters that weren’t going to be denied when they fought Commey in 2016. They were both ready to go to war with him, and they were able to get the better of him. Teofimo will need his eyes open coming into the fight tonight, because this isn’t another one of his soft opponents.

“When you have a young guy that you want to become a star, you put them on the big stage at Madison Square Garden, and you want him to bring the curtain down,” said Atlas. “I think there’s a good chance he [Lopez] brings the curtain down. I’m going to pick Lopez by sudden knockout to knockout Commey out of the blue in three rounds.

“I think Lopez is going to close one of these gaps, and deliver a punch, a lightning bolt, that Commey, with all his training in camp, couldn’t prepare him for the quickness, when he realizes how quick this guy can close the gap, and put one on your kisser. So I’m picking Lopez to make Top Rank very happy to do it by sudden knockout,” said Atlas.

Teofimo will need to be mentally tough to win

For Teofimo to win this fight, he’s going to need to be able to take a lot of big shots from the 32-year-old Commey, because this is a fighter that isn’t going to fall apart early. Teofimo has fought a lot of lesser opposition since he turned professional, and he looked in shock when he was matched against his first solid opponent in Nakatani last July. Although Teofimo won the fight by a one-sided 12 round decision, it wasn’t a great performance.

“Like I said, I’ve got an all around game. I’m not one-dimensional, but there are a lot of things that I can do in the ring, and this week it’ll show,” said Crawford on Max on Boxing at ESPN. “It just shows where my skill level is at,” said Crawford in responding to a compliment Teddy Atlas gave him in which he said, he’s the most instinctual fighter he’s ever seen.

“Instincts are something you can’t teach,” said Crawford. “It’s something inside you, and it just happens and it’s on the fly. I think it comes from repetition over and over when you’re doing things. Sometimes you do things without even knowing you’re doing it. I think when my career is over with, they’ll say, ‘Terence Crawford is the best switch-hitter.’

“And I don’t think anybody in the sport of boxing have done what I’ve done in switching. I don’t think nobody has fought to the level of the caliber that I’ve been fighting at.

Crawford has the talent to win easily

“This guy I’m about to fight, Egidijus [Kavaliauskas]. Everyone is s— on him in the media,” said Crawford. “Why? Because they don’t know nothing about boxing. They say, ‘He’s a bum.’ Well, how can you be a two-time Olympian and be a bum? Right,” said Crawford when told by Ward, ‘That’s the curse of being a great fighter.’ “And I see it now because that’s how it was with Floyd [Mayweather Jr.].

“When Floyd was fighting all those guys, they were, ‘Floyd was getting them at the right time,’ and maybe he was. But at the same time, he was getting discredited for the fights that he was really winning. They got it wrong when they gave [Vasiliy] Lomachenko fighter of the year when I won undisputed [140-lb championship by beating Julius Indongo]. I’m not happy about that.” said Crawford.

The reason why the media and the boxing fans are so down on Kavaliauskas is because he doesn’t have experience against upper tier fighters. He didn’t look good in his last fight against Ray Robinson in fighting to a 10 round draw.