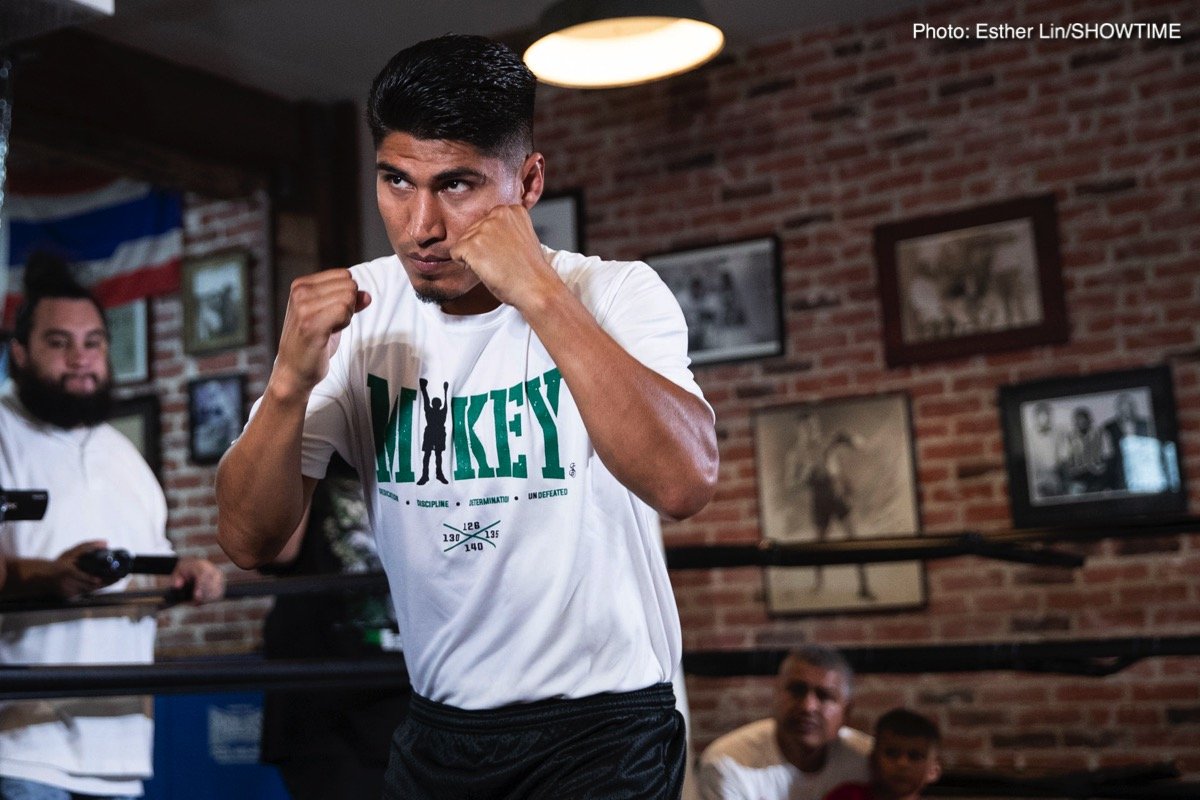 By Dan Ambrose: Mikey Garcia (39-1, 30 KOs) is waiting on Manny Pacquiao to decide when or if he plans on making the fight with him, according to trainer/brother Robert Garcia. If the Pacquiao (62-7-2, 39 KOs) fails to happen, then Danny ‘Swift’ Garcia is an option for Mikey, as well as Jessie Vargas.

It would help Mikey is he didn’t seem so focused on getting the Pacquiao fight, as he’s frozen his career waiting on that fight. Some boxing fans think Mikey is in the cash out phase of his career, looking for just paydays from this point on.

Danny is already scheduled to fight Ivan Redkach on January 25. Mikey would need to wait until April or May to fight Danny, as long as he gets out of the fight with Redkach in one piece.

Mikey could face Pacquiao or Danny Garcia next

“There is talk about Manny [Pacquiao]. They do mention Danny Garcia,” said Robert to TheRingDigital in discussing possible fights for Mikey. “Just recently, we heard somebody mentioning Jessie Vargas. In reality, if we end up waiting on Manny, it’ll be when Manny decides, because we can’t tell him, ‘You have to fight us on a certain date.’ It’s going to be on Manny’s date.

“Danny Garcia, they already are talking about a date of January 25th or somewhere around there, and I don’t know if it’s enough time for Mikey to prepare. So I don’t know. It’s not going to be easy for those fights to happen because of the timing.

“Pacquiao obviously is going to be the one that calls the dates, and those are going to be his dates. So we have to wait until whenever he wants to fight. And so in the meantime, Mikey is in the gym, hoping to hear something soon,” said Robert.

Robert says Mikey will be moving back down to 140 after one more fight against 147.  Mikey wants the Pacquiao fight obviously, and if he can’t get that then match with Danny or Vargas could happen. Mikey, 31, hasn’t fought since his loss to IBF welterweight champion Errol Spence Jr. last March in Arlington, Texas.

It’s not helping Mikey that Pacquiao hasn’t decided whether he’ll face him or not. If that fight does get made, it would be in April or May. Mikey will have been out of the ring over one year by that time, and that won’t be good for him. However, the riches that Mikey can make fighting Pacquiao will make the long layoff well worth it, as the match would be on pay-per-view, and it would be another huge payday for him.

WBA Super World welterweight champion Pacquiao will be picking his next opponent from this shortlist: Danny Garcia, Shawn Porter and Mikey Garcia. Of those three, Mikey is in the worst position due to his time out of the ring, and the way that he was dominated by Spence.

Pacquiao won’t receive a lot of credit if he picks out the 31-year-old Mikey for his next fight, because he’s accomplished nothing since his win over Robert Easter Jr. in 2018.

Porter (30-3-1, 17 KOs) is coming off of a 12 round split decision defeat against Spence on September 28th, but he performed well in losing that fight. He gave Spence all he could handle in going toe-to-toe on the inside. In the end, Spence had too much skills and power for Porter, and he was able to beat him at his own game on the inside.

Spence could have made his job a lot easier had he boxed Porter, but he wanted to prove to the fans that he could beat him on the inside. Porter would be a hard fight for Manny, because he would have to deal with his roughhouse style of fighting. Porter couldn’t fight that way against Spence, because he didn’t have the strength advantage over him like he normally does against his opponents.

Mikey Garcia will go back down to 140 soon

“He was offered a fight in December, and he turned it down. Not because it wasn’t worth it. The money was very, very good,” said Robert Garcia to TheRingDigital about Mikey Garcia. “At 147,” said Robert when asked what weight class. The thing about Mikey is, he says, ‘I’ve commentated about other fighters that have picked easy opponents, and now I’m going to go do the same? There’s no way I’m going to do that.’

“We’ve got to respect his decision. He understands that 140 is where he belongs, and that’s what he’s going to be looking at after his next fight. He’ll been out for almost a year. So we’ll come back at 147 or maybe a catchweight at 144 or 145 to little by little get back to 140, because that’s where he belongs, and he already understands that. It’s the best division for him,” said Robert about Mikey moving back don to 140 soon.

140 not a good weight class for Mikey

It would be good for Mikey to go back down to light welterweight as soon as possible, because he’s too small and weak to fight at 147. But even at 140, Mikey is going to have problems in that weight class. He didn’t look good in beating Sergey Lipinets by a 12 round decision last year in March. That fight was a lot closer than the scores handed in by the three judges. In fact, Mikey looked like the loser at the end with his badly swollen, blood-covered face.

The champions at 140 now are high quality guys that would be a nightmare for Mikey to fight, and he might have the size or power to beat them. We’re talking about WBC/WBO champ Jose Ramirez and IBF/WBA champion Josh Taylor. Those fighters would likely be considered the favorite against Mikey. Regis Prograis, Subriel Matias, Ivan Baranchyk and Mario Barrios would give Mikey a lot of problems as well. Those are young, rugged 140-pounders, who unlike Mikey, have stayed active with their careers. These aren’t guys that are sitting out of the ring 1-2 years, dealing with promotional issues or looking for big paydays.