Lomachenko to Teofimo Lopez – “I’ll see you in April”

By Aragon Garcia: Teofimo Lopez (15-0, 12 KOs) got the last hurdle out of his path for him to face WBA/WBC [F]/WBO lightweight champion Vasiliy Lomachenko next with his big 2nd round knockout victory over IBF 135-lb belt holder Richard Commey (29-3, 26 KOs) last Saturday night in front of a sold out crowd at Madison Square Garden in New York.

The #1 ranked IBF contender Teofimo FLATTENED Commey with a perfectly placed right hand in round 2. Commey surprisingly got back to his feet, and staggered across the ring.

Commey could not have survived the round

The referee David Fields could have stopped it at that point, and no one would have blamed him. But he let it go on, and Lopez, 22, landed a small burst of power shots against a trapped Commey against the ropes, and the referee was forced to stop the contest.

There was no way on earth that Commey would have made it to the end of the second round. Not with the way that Teofimo was laying into him with brutal power shots to the head. Lopez literally couldn’t miss at that point with Commey, 32, so badly hurt from the knockdowns moments before. The bout was stopped by referee Fields at 1:13 of round 2.

“This is boxing, and that’s why we love it. He always has power, and he’s a smart fighter, but it depends on your opponent. I want to unify the [lightweight] titles, and then after that, I want to organize a fight with Gervonta Davis,” said Lomachenko.

Lopez vs. Lomachenko is the fight that their promoters at Top Rank Boxing want, and it’s a fight that they want as well. Lomachenko (14-1, 10 KOs) has a goal of becoming the undisputed lightweight champion, and then moving back down to 130. Teofimo doesn’t plan on letting the aging 31-year-old Lomachenko realize his dreams of unifying the division.

Loma couldn’t do it at 130, and he might not be able to do it at 135. Age is starting to catch up to the two-time Olympic gold medalist Lomachenko. He’ll be turning 32 in February, and he’s not a young 32. Lomachenko has a lot of ring miles on him, and it’s starting to show with his recent fights against Luke Campbell and Jorge Linares.

Lopez, 22, needs a win over Lomachenko to take his career to the next level to make him the next star in boxing. Teddy Atlas says Top Rank wants to turn Teofimo into the next Canelo Alvarez. Those are pretty big shoes for Lopez to fill, but he’s poised to do that in his next fight. If Lopez destroys Lomachenko like he did against Commey, he’ll be on his way.

Lopez knew Commey was done after he hurt him

“Styles do make fights, and that’s what was so intriguing about this fight,” said Teofimo about his fight with Commey. “Richard was on a four-fight knockout winning streak, and I was coming off of a horrible performance [against Masayoshi Nakatani]. I was just in a bad state of mind during that time. I looked at him, he’s done,” said Lopez when asked about his immediate reaction after he landed his initial right hand that hurt Commey in round 2.

“He was out, but I wanted to take my time. I was going to jab-jab, but he started covering up. So I started throwing hooks, hooks and right hooks, but I had to be cautious. What happens with Richard Commey when he gets hurt, he’ll throw, and those shots aren’t like little shots. They’re big shots. I had to smother him, and keep going, and keep going. I should have came through with an uppercut,” said Lopez.

Commey would have needed a miracle to make it out of round 2 after Lopez dropped him with a right hand. After knocking Commey down, Lopez didn’t lose his head, as he fought smart in going for the finish. Lopez stayed calm, and placed his punches perfectly to get the knockout.  Commey tried to land a big right hand during the final sequence, but it missed.

This was an improved Lopez that we saw last night from his performance against Masayoshi Nakatani last July. You could tell that Lopez’s sparring with former IBF light welterweight champion Ivan Baranchyk helped him.

He KO’d his opponent, backflipped and struck the Heisman pose with a jersey both times 😮 pic.twitter.com/bvXPMY7EhN

Teofimo: Devin Haney backing out of mandatory was b–ch move

“That was a b— move, I’m sorry,” said Lopez about Devin Haney backing out of his fight against Javier Fortuna due to a shoulder injury. “We all got rotator cuff problems. I’ve been hurting on this side [left side], but you see me going out there and doing my thing, and throwing more of them. I just think if you’re a real champion, you go out there and fight your mandatory. Whatever it is he has, it may be that bad, but they [WBC] put him [Haney] on time out.

“I fought the world champ,” said Lopez about his win over IBF lightweight champion Commey last Saturday night. “The WBC has there was of doing things. They make up anything they want at any time. They even took me out of their rankings, along with the WBA. Thank you to the IBF for giving me the opportunity. We fought for it and now we’re due. I feel like Loma is still the true WBC world champion, so let’s make the fight happen,” said Lopez.

WBC has given Devin Haney the ‘Champion in recess’ tag, so he’s going to need to fight for his title to recapture it when he’s healthy. The World Boxing Council has already ordered #1 Javier Fortuna and #2 Luke Campbell to fight for the vacant belt. When healthy, Haney will fight the winner of that match for his old WBC belt.

The way that Lopez captured his title in beating Commey was far better than how Haney got his. Haney won the WBC title outside of the ring when Lomachenko was given the Franchise tag.

Teofimo still won’t be undisputed if he beats Lomachenko

“The thing is, if he wins he’s undisputed. If I win, I still have to win a belt [WBC title]. It’s things like that, and it’s politics,” said Lopez in pointing out that he CAN’T become WBC Franchise champion by beating Lomachenko. “I was just practicing. And I came back and I was just trying to perfect my craft, and I was trying to block his jab. He got me with a good one, and I had to, ‘Oh s—, let me move my head; I don’t want to go through all this stuff again.

“And I was just practicing everything, and it was a real good camp actually,” said Teofimo. “I enjoyed it in sparring with [former IBF light welterweight champion] Ivan Baranchyk at 140. That man is a beast, and Abraham Nova, shout out to him. The left hook, everything. You’ve got to trick them. You go low, and then come up top, and see how he reacts to it. Then you try and do it again or you just throw it,” said Teofimo.

There’s no way that Teofimo can win the Franchise designation from Lomachenko by beating him. That’s an honorary type of invisible title, and it’s not an actual belt that the WBC gave Lomachenko. The real WBC champion was Haney, but now the belt is vacant. So if Lopez beats Lomachenko, he’ll still need to fight whoever winds up with the WBC title in order to become undisputed.

“The jab is the most important punch,” Lopez continued. “It just happened. I was prepared for 12 rounds, and I was prepared for one round. Anything can happen, and it happened in the second round. I knew he wanted it bad, just as much as I did,” said Teofimo about Commey. “I looked around the stage, and I know they’re all pretty much here for Crawford, but we also know they’re here for this fight.

“I’m all smiles. I’ll see you guys next year. Hopefully we can make that fight [Lomachenko] for everybody. I want to make it happen. Who knows? At Madison Square Garden, I’d love it back here. But this time we actually sold out the Arena,” said Lopez when told that Lomachenko has fought at Madison Square Garden before.

Top Rank and Lomachenko both want the fight to take place with Teofimo. This isn’t a case of Lopez having to drag kicking and screaming Lomachenko into the ring to fight him. He wants that fight, and needs it for him to unify the 135-lb division. Lomachenko is already planning on trying to fight Gervonta ‘Tank’ Davis after the Teofimo fight. That shows that he believes he’s going to beat Lopez, and he could be in for a big surprise like Commey was. 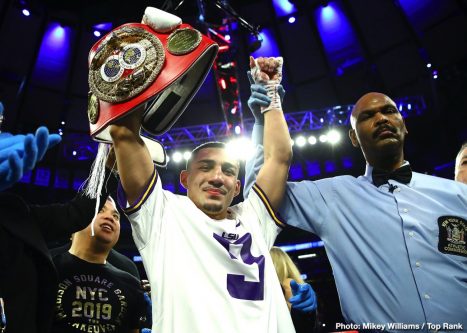 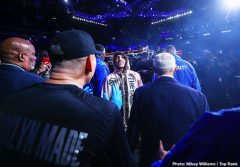 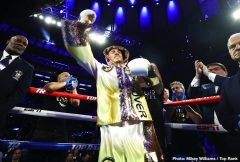 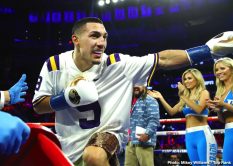 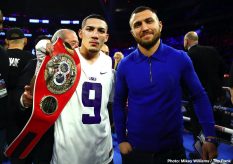 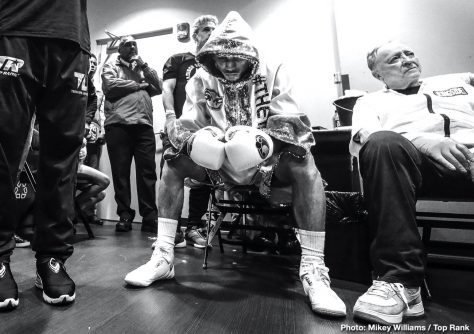 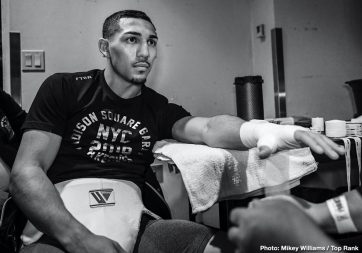 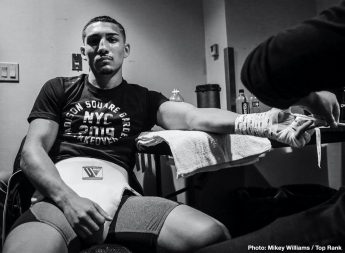 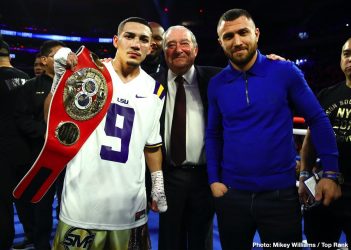 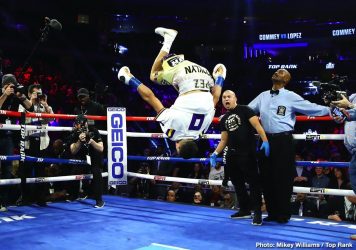 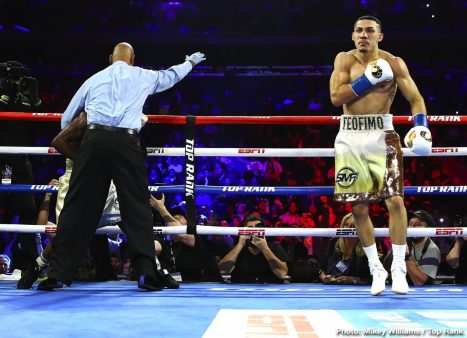 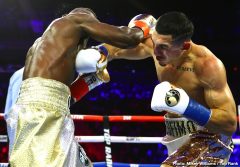 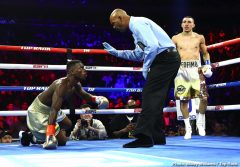 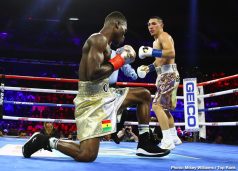 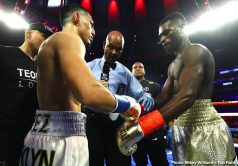 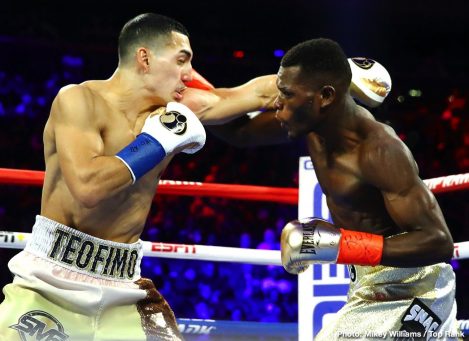 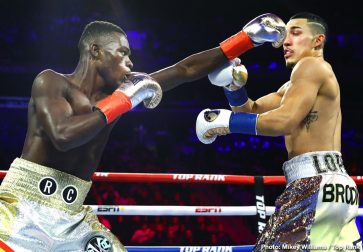 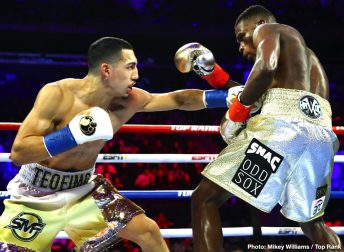 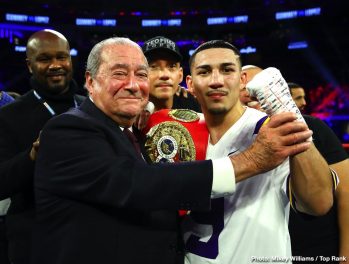 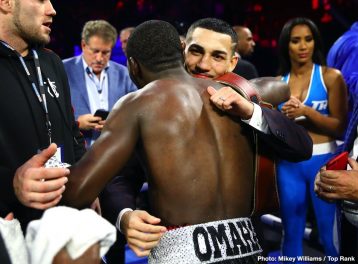