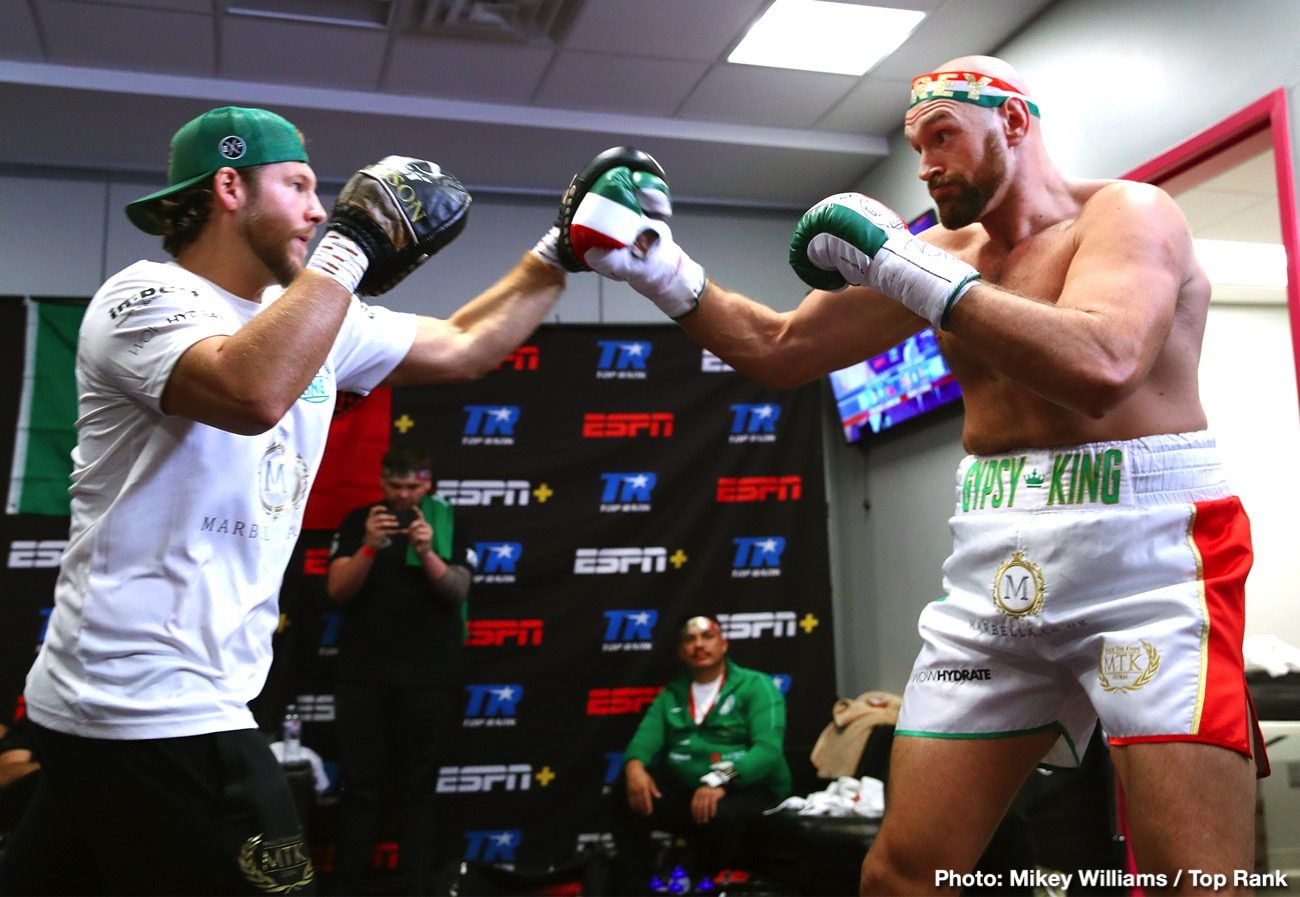 By Charles Brun: Lineal heavyweight champion Tyson Fury has split with his trainer Ben Davison, and he’s now looking for a replacement to assist him in preparing for his crucial rematch against WBC champ Deontay Wilder on February 22. The writing was on the wall for Fury (29-0-1, 20 KOs) needing a new trainer following his grueling 12 round unanimous decision victory over Otto Wallin on September 14.

Fury looked weak and lethargic in beating the 6’6″ Wallin, and he fortunate the he didn’t lose the fight. The ringside doctor gave Fury a tremendous break by not stopping the fight after he suffered a huge gash over his right eye in the third round.

Despite the cut being MASSIVE, Fury was allowed to fight the full 12 rounds without the contest being halted. Nevertheless, the cut required a WHOPPING 47 stitches to sew up, and there’s concern about it. Fury won on the cards by the scores 118-110, 117-111, 116-112. The real story was how weak, vulnerable and how poor he looked against Wallin. Fury was hurt in the 12th by Wallin, who isn’t a big puncher.

Davison reveals the news of the split with Fury

Obviously it’s not gonna stop until there’s an answer, Tyson and myself had to both make decisions for our careers, which resulted in our working relationship coming to an end, HOWEVER, we remain friends and he will SMASH the DOSSER!!

Davison had helped Fury during a crucial period of his career in assisting him in coming back after a long 2 1/2 year layoff. Fury trimmed off a massive amount of weight in going from nearly 400 lbs to the sleep 250 lbs. However, losing all that weight has hurt Fury’s punching power, and his defense looks like it’s deteriorated. Wallin was able to nail Fury with shots all throughout their fight, and he shouldn’t have been able to.

The timing is bad for Fury changing trainers

With the rematch with Deontay Wilder looming in two months from now, Fury is in a bad position. Fury should have made the move to swap out Davison BEFORE his last fight with Wallin rather than after.

The odds-makers will see this move by Fury, and likely make Deontay the favorite. In an interview on Saturday, Fury looked painfully thin, as if he’d gone into a weight loss clinic. He appears to have lost even more weight since his last fight with Wallin, and he looks too thin. Fury weighed 254 lbs for the Wallin fight, and his power was completely one. Wallin walked through Fury’s slapping shots all night, and nailed him at will with punches.

Tyson’s father wasn’t happy with his performance against Wallin

“That is the worst I have ever seen him,” said Fury’s father John Fury to BT Sport in talking about his recent fight with Otto Wallin. “He [Fury] was as weak as a kitten…It has gone terribly wrong in the camp and someone is to blame.

“Tyson never landed a meaningful punch. I saw this coming. If he keeps hold of that team, that whole team, they will cost him his career. Ben Davison and everyone,” said John.


« Lomachenko to Teofimo Lopez – “I’ll see you in April”

Tim Bradley: Crawford is BEGGING the PBC fighters to face him »