By Tim Royner: Former WBO junior middleweight champion Liam Smith and 2016 Olympian Josh Kelly have been added to the Daniel Jacobs vs. Julio Cesar Chavez Jr undercard in separate fights on December 20th at the Talking Stick Resort Arena, in Phoenix, Arizona. The fight card will be shown on DAZN.

The opponents for 25-year-old welterweight contender Kelly (9-0-1, 6 KOs) and Smith (28-2-1, 16 KOs) haven’t been selected yet, but you can’t expect much. There’s now less than one month to go before December 20, and promoter Eddie Hearn isn’t going to put either of them in with a super talented fighter.

Kelly needs a lot of work on his defense, as well as his power for him to make to the next level. #11 WBA, #15 WBC Kelly is coming off of a 10 round draw against Ray Robinson last June on the Anthony Joshua vs. Andy Ruiz Jr. card in New York, and he’s lucky he didn’t lose.

What Kelly doesn’t understand is he lacks the reflexes, and the hand speed to fight the way he does. He tries to fight like Roy Jones Jr. and Floyd Mayweather, but he’s not blessed with their speed and cat-like reflexes.

Kelly has a lot of bad habits inside the ring, and thus far he hasn’t shown any signs of improvement. These are flaws that Kelly has in his game:

As a whole, Kelly has so many bad habits to his game, there’s a strong possibility that he’ll never progress beyond the domestic level. His draw against 33-year-old Ray Robinson was arguably a gift by the judges, considering that he was getting pummeled most of the fight. Kelly’s fans point out that Robinson recently fought #1 WBO contender Egidijus Kavaliauskas to a 10 round draw last March, but that fight was a lot closer. Robinson did enough to deserve a clear win against Kelly. You can’t say the same thing for Robinson’s fight against Kavaliauskas. That looked like a real draw. 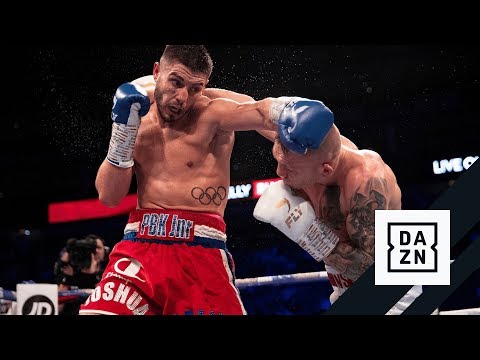 It’s important that the 31-year-old Smith (28-2-1, 16 KOs) keeps winning, as he’s trying to get in position for a world title fight. He lost his WBO 154-lb title to Saul Canelo Alvarez in September 2016 by a 9th round knockout. Last year, Smith fought for old title against WBO junior middleweight champion Jaime Munguia and lost a 12 rund unanimous decision in Las Vegas, Nevada.

Smith gave Munguia a good fight for the first six rounds, but then he faded and was outworked in the second part of the fight. The loss really bothers Smith, being that he thought he could have won the fight.

Since the defeat to Munguia, Smith has won his last two fights against Mario Alberto Lozano and Sam Eggington.  Smith is ranked #5 with the WBO, and if Munguia vacates his title, then he’s got a chance to battle for it. Patrick Teixeira captured the interim WBO 154-lb title last Saturday night in beating #1 WBO Carlos Adames by a 12 round decision. Smith would have a better than average chance of beating Teixeira

In addition to Kelly and Smith, Matchroom Boxing has the following names on the undercard:

ounced: Liam Smith and Josh Kelly will return on the undercard of Jacobs vs Chavez Jr, Dec 20th in Phoenix. Maurice Hooker vs Pedro Campa, plus Gabriel Rosado and Daniyar Yeleussinov also added to the show which already includes Julio Cesar Martinez vs Cristofer Rosales.


« Naoya Inoue reacts to Casimero calling him out: ‘I’m interested’