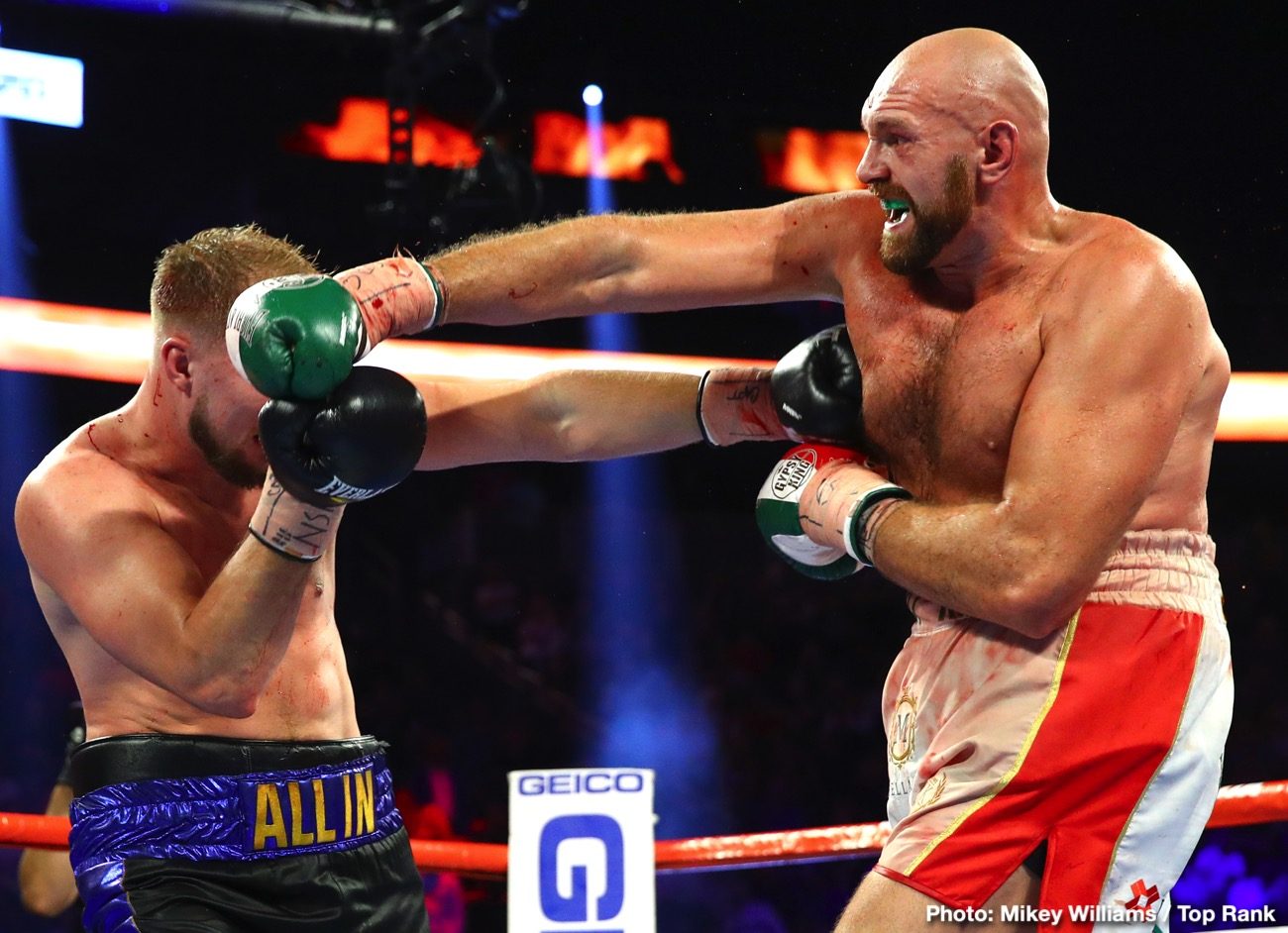 By Charles Brun: Tyson Fury’s new assistant coach Andy Lee says the ‘Gypsy King’ will be focusing more on sitting down on his shots when he faces WBC heavyweight champion Deontay Wilder in a rematch on February 22 in Las Vegas, Nevada. The goal is for Fury to knockout Wilder, and in order to do that, he’ll need more power.

Former middleweight world champion Lee notes that Fury (29-0-1, 20 KOs) hurt Wilder several times in their fight last December, but he didn’t finish the job. This time he wants him to use more power on his shots to stop the unbeaten Wilder (42-0-1, 41 KOs).

Lee will be working alongside Fury’s new trainer Javan ‘SugarHill’ Steward to prepare Tyson for the rematch. SugarHill has been brought in as a replacement for Ben Davison, and Fury has worked with him before many years ago. When Fury trained in Detroit at the Kronk Gym with legendary coach Emanuel Steward, SugarHill worked with him and Lee.

Fury will be vulnerable if he tries to trade with Wilder

It’s a great idea in theory to try and improve Fury’s power, but in practice it’s pretty doomed for failure. Even if Fury does get a little more mustard on his shots, it will come at a great cost in terms of his defense. To punch hard, Fury will need to stop moving, and once he does that, he’ll be a sitting duck for Wilder’s right hands.

Fury will try and KO Wilder if he hurts him – Lee

“I think Tyson, for the Wilder fight, will have to do what he does – feint, move, be tricky, unpredictable – but also have a little more authority in his punches,” Lee said to BBC 5 Live.  “He hurt Wilder several times first time around. With ‘SugarHill’ in the corner, if he has him hurt again, I think you will see Tyson going for the finish.”

Fury’s lack of power was a problem for him in his first fight with Wilder, as he was mostly slapping with his shots. As a result, Wilder stalked Fury around the ring, and wore him down. In the 9th and 12th, a tired Fury hit the deck twice after getting nailed by Wilder’s right hand power shots.

In the late stages of the first Wilder-Fury fight, Tyson could no longer move, and he had nothing to hold Wilder off of him. Consequently, Wilder caught up with Fury and dropped him like a bad habit again and again.

Fury’s performance against Wallin showed changes needed to be made

Not surprisingly, Fury’s father John Fury wasn’t happy with his last performance against Sweden’s Otto Wallin last September, saying that Tyson looked “as weak as a kitten.” Fury wasn’t just as weak as a kitten, he was also very lucky That fight would have been stopped by a lot of ringside doctors due to Fury’s horrific cut over his right eye in the 3rd round. The cut later needed an incredible 47 stitches to close.

Fury would have lost if the fight had it been stopped due to the cut.  That fight arguably should have been stopped, and the fact that it wasn’t obviously led to the cut worsening. Fury is now going into the rematch with Wilder with a TON of scar tissue over his right eye, and Deontay says he’s going to open the cut up right away.

It’s unclear whether John’s comments was the catalyst for Fury switching out Davison for SugarHill or not, but it’s possible. Davison had done an excellent job of getting the weight off for Fury, but his punching power remained as weak as ever.

That’s been a stubborn area of Fury’s game that has been resistant to change from day. Like his cousin Hughie Fury, Tyson isn’t a puncher. He slaps with his shots, and moves constantly to protect what some believe is a shaky chin.

“My role is basically to be another set of eyes, to give advice where I can, if I see something I think can be improved or worked on,” Lee said. “Emmanuel Steward would be busy with Wladimir, so SugarHill would train me and Tyson. I think it’s an excellent match. SugarHill emphasises a lot on balance and being strong with the jab,” said Lee.

Unfortunately, it might be an exercise in futility for Steward and Lee to try and improve Fury’s punching power. It’s like trying to take junk-ball pitcher in baseball to turn him into the next Nolan Ryan overnight. The chances of that happening are nil, and it’s likely we’ll see Fury as slapper he’s always been when he faces Wilder in the rematch.

Fury’s lanky 6’9″ frame makes it difficult for him to throw with power, and he worsens the problem with his bad form when throwing shots.