Eddie Hearn reacts to Dillian Whyte being cleared by UKAD 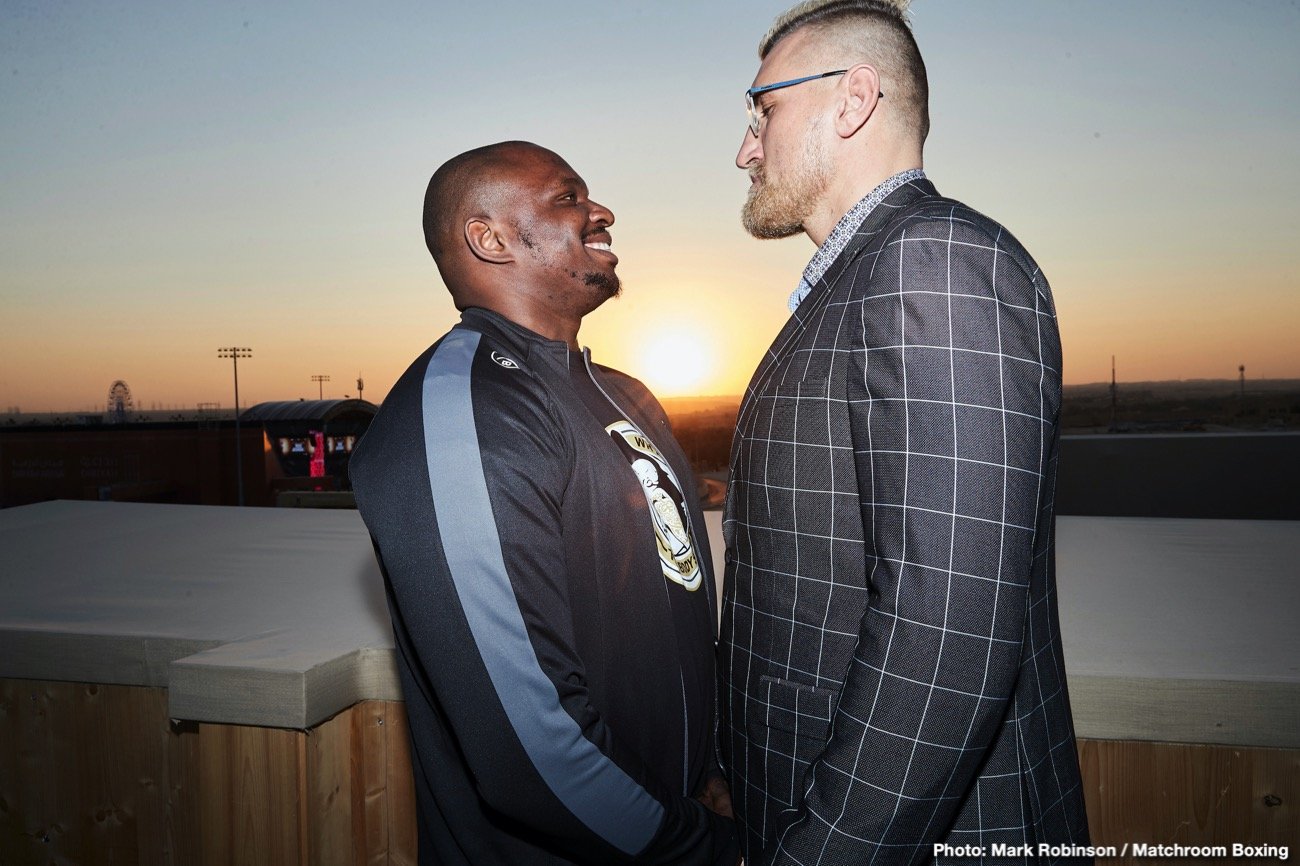 By Tim Royner: Eddie Hearn was excited about the news of heavyweight Dillian Whyte being cleared by UKAD on Friday about his aadverse finding from before his last fight with Oscar Rivas last July. UKAD cleared the highly ranked Whyte (26-1, 18 KOs), and they withdrew the charge of an anti-doping violation.

Fans had been asking Hearn for months about when Whyte’s B-sample results going to be revealed by UKAD. Finally after five months, UKAD released the information in clearing him. Hearn was over the moon, and doing a bit of gloating about it.

Being cleared by UKAD won’t enable Whyte to challenge WBC heavyweight champion Deontay Wilder in 2020, unfortunately. While UKAD had Whyte under investigation, the World Boxing Council replaced him with Tyson Fury as Wilder’s mandatory for 2020. Whyte will need to wait until 2021 for a title shot, and that’s if he wants to go the WBC route against the winner of the Wilder vs. Fury rematch.

Whyte is fighting tonight against Mariusz Wach (35-5, 19 KOs) on the Anthony Joshua vs. Andy Ruiz Jr. card at the Diriyah Arena, in Diriyah, Saudi Arabia. Dillian is taking the fight on 3 weeks’ notice, so his weight is high at 271 lbs.

“No failed drug test, and no nothing,” said Hearn to IFL TV about the news that UKAD has cleared Whyte of his drug issues. “I think the statement tells you all you need to know. A full investigation, no failed drug test, no charge, cleared of any wrongdoing and any negligence. This is unheard of for a testing agency to use words like this. So please, please, please, f— right off, and apologize to the man [Whyte].

“Don’t worry about apologizing to me. I’ve got months and months of every single Tweet I put out, you’ve got the transformer pajamas brigade just like, ‘B-sample.’ Just wait your f—- turn, listen and watch. So now you’ve done it. It doesn’t matter about me, because Dillian Whyte is a brute.

Whyte has been cleared by UKAD, but Hearn isn’t isn’t saying whether the WBC will step in and make him the mandatory for Deontay in 2020. For Whyte to have to wait another year to get a title shot against Wilder, it’s a real negative. If the results of UKAD’s investigation been returned a lot sooner, Whyte would be the one challenging Wilder next year instead of Fury.

“You are f—, and now the fun begins. This isn’t coming from me,” said Hearn. “It’s coming from Dillian Whyte. If you are one of those people that have lied, made things up, or broken confidentiality, and positioned him as a cheat, and ruined him or attempted to ruin his career, his mandatory position, his ability to make money, his reputation, he’s coming for you. And now it’s confirmed 100 percent, totally innocent, no charge.

“How do you feel right now. Show the man who has gone through hell for the last six months some respect. It’s not going on right now with UKAD. It’s going on with the people that tried to f— with him, and now they’re going to pay. For the people that didn’t show him respect, you can apologize. You can say you’re sorry, but it’s probably too late,” said Hearn.

UKAD’s statement on Whyte comes at the perfect time just before tonight’s fight card in Saudi Arabia. So instead of some boxing fans complaining about Whyte being on the card before UKAD had released his B-sample results, now they have nothing to bicker about. It’s over with, and Whyte can now fight without the cloud of the UKAD investigation following him into tonight’s fight with Wach.

What’s important now is for Whyte to win, look good, and try and set up important fights in 2020. It would be better for Hearn to keep Whyte busy against someone like Joshua or Ruiz rather than having him waste an entire year waiting for a world title shot against the winner of the Wilder vs Fury 2 rematch.

“19 1/2 stone is heavy for Dillian,” said Adam Smith of Sky Sports to IFL TV in reacting to Whyte weighing in at 271 lbs. “He has fluctuated before, but his best is way under that. Look, he hasn’t had that much notice for a fight like this. Mariusz Wach has been ticking over in the gym.

“Obviously, he’s had difficulties outside of the ring, and he’s been wanting a big fight for a long time,” said Smith about Whyte. “It’s good to get him back. He says he’s in good enough shape. He said at the fighter’s meeting last night that he didn’t care about what he weighed. That was the assumption that he was coming in overweight. So his weight, Andy Ruiz’s weight, it’s very intriguing.

“You never know in this sport what’s going to happen. Whether he’s looking for a short fight. Mariusz Wach was taken out late by [Martin] Bakole. Maybe he wants to do it quickly, but if he doesn’t, you’ve got to hope that he has the stamina and the conditioning, which I’m sure he does to get through a 10 rounder,” said Smith.

Taking the fight with Wach on short notice is obviously the reason why Whyte is coming in at a career high at 271 lbs. A lot of boxing fans were shocked at Whyte weighing so much, because he’s short at 6’3″, and that’s heavy for someone that height. The question is, why isn’t Whyte keeping his weight down in between fights? That can’t be a good thing for Whyte to be ballooning up to over 270 lbs in between contests, as it forces him to take a lot of weight to get ready for his matches.

Joshua has to overcome his demons – Hearn

“He couldn’t be in better shape physically and mentally,” said Hearn about Joshua to IFL TV in talking about tonight’s rematch with Ruiz. “Now he has to talk into the door of opportunity. Go and take it. The belts are in the air. As soon as the bell goes, all you’ve got to do is beat that man across the ring, and you become a two-time heavyweight champion of the world. All great, everyone’s in a great place, and everyone’s buzzing.

“We’re really comfortable, and in a great place being out here. Saudi is fantastic, the weather’s great. He’s got a smile on his face, and he’s in tremendous shape. I’m sure he’s got some demons to overcome. Any man would after the first fight, but I’m sure he can do it. I know he can, and I believe he’ll do the business tonight. He’s learned a lot” said Hearn.

If Ruiz might do a number on Joshua again tonight, and in that case, Hearn will need to decide what to do with him. It won’t be a good look on Hearn’s part if he blames the loss for Joshua on a lucky punch or him not being motivated. He needs to take the high road and give Ruiz credit for being a better fighter.

“I asked him last night, ‘When was the last time you were this pumped for a fight?’ He was like, ‘Probably Charles Martin, where I was this edgy for a fight.’ That’s what he needs. He needs to be edgy. That was the problem. He just wasn’t edgy anymore. So he’s bang up for it,” said Hearn.

“Tune in to Sky Sports Office. This is the moment in time,” said Hearn. “Close your eyes, say a little prayer for our boy [Joshua], because he’s going to war tonight to make history to reclaim his world heavyweight championship.

For Joshua’s sake, hopefully he isn’t listening to Hearn, and planning on going to war with Ruiz. He tried that last time, and he was blasted out in 7 rounds. There are certain fighters that Joshua matches up well with when ‘going to war,’ but Ruiz isn’t one of them.