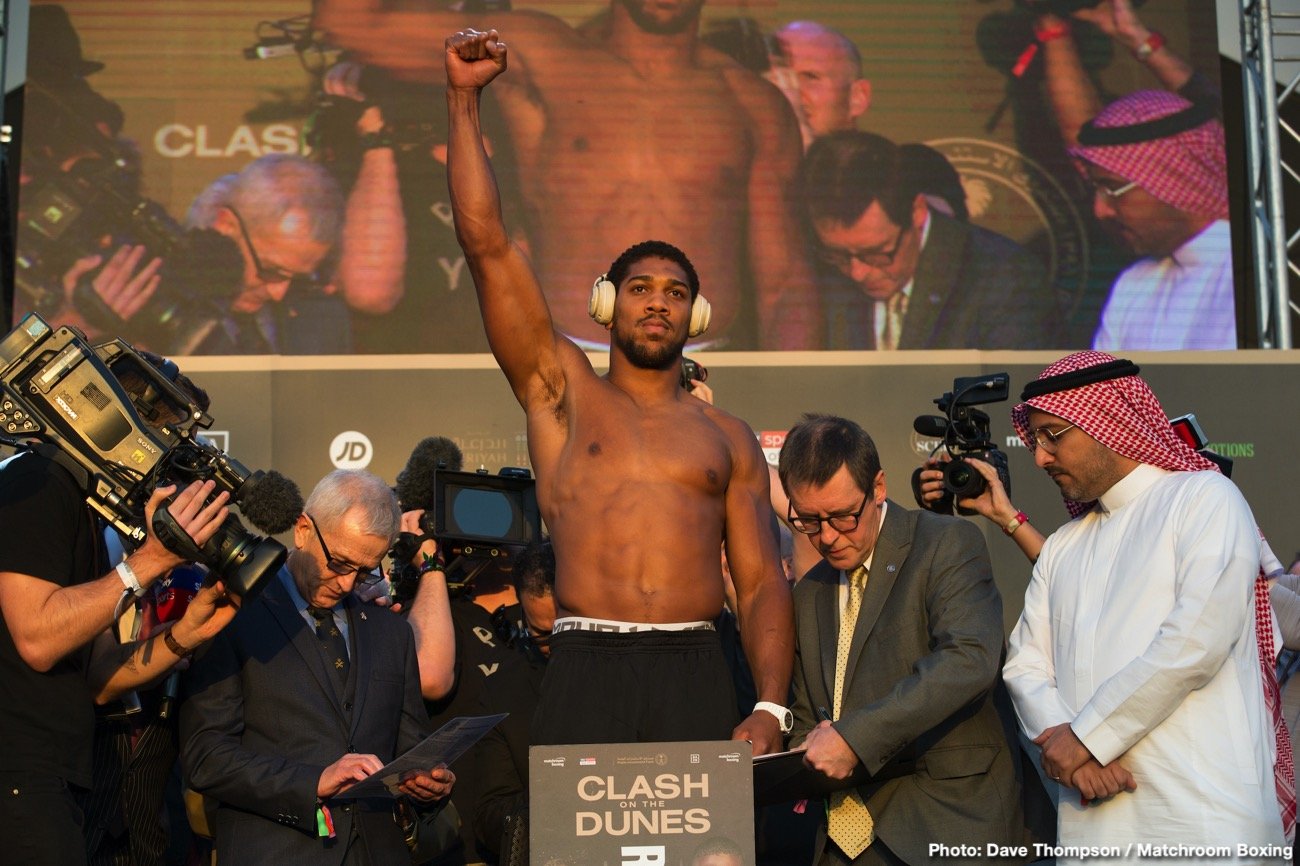 By Jim Dower:  Tonight’s fight between Anthony Joshua and Andy Ruiz Jr. is a much bigger fight than  a future bout between AJ and lineal heavyweight champion Tyson Fury, according to Barry Hearn of Matchroom.

Ruiz’s previous win over Joshua (22-1, 21 KOs) last June is the reason why this is such a huge fight in comparison to a Joshua-Fury contest. Fury would be coming into a fight against Joshua without a true world title belt, and with no wins over notable opposition since his victory against Wladimir Klitschko in 2015.

Although Fury has raised his status in the U.S and the UK recently by fighting WBC heavyweight to a 12 round draw against Deontay Wilder last year in December, he didn’t beat him. He was lucky the referee didn’t stop the fight after Wilder poleaxed him in the 12th.

“I don’t know how long this is going to last,” said Hearn to Boxing Social about the Saudis showing interest in staging huge boxing events in their country.. “Will this be a one off or will they say, ‘We enjoyed it so much that we want to do some more.’

“The fact that this is the biggest grossing heavyweight match of all time, it shows you that we’re not just dependent on local gate, and pay-per-view revenue, because site fees of this proportion dwarf them.

Joshua vs. Fury would be big in the UK, but probably not in the U.S. The lack of opposition for Fury recently hurts a potential fight between him and Joshua. Top Rank Boxing recently signed Fury to a huge contract, but they’ve matched him against poor opponents in Tom Schwarz and Otto Wallin. Fury didn’t look good against Wallin, and he could have been stopped due to his cut. He was fighting with a cut that later required 46 stitches to close.

Top Rank will finally be letting Fury fight Wilder in February of next year, and if he wins that fight, then that would help make a match against Joshua into a big affair. There’s a very good chance both Joshua and Fury lose their next fights. Ruiz has Joshua’s number, and Wilder seems to have Fury figured out.

“I thought it was hilarious,” said Hearn when asked his thoughts on Wilder’s recent fight against Ortiz. “You’ve got to take your hat off to Wilder. He can bang, but to be so comprehensively out-boxed for six rounds. When I looked at Ortiz, I thought, ‘Ortiz has got himself in shape.

“He’s in much better shape than his previous fight, and again, Ortiz, like Ruiz, has got the amateur pedigree, he’s got the skill set. I would think if you were in Ortiz’s corner during the first six rounds, you would have been so happy, and then all of sudden comes the equalizer.

“You can’t say anything other than, ‘well done, Wilder.’ That’s what he does. He looks awful, he can’t box, he can’t fight, but he can punch. That’s always going to get him his, ‘get out of jail card.’ It’s also going to give people like Tyson Fury belief that he can do what Ortiz did for six rounds, and maybe do it for 12,” said Hearn.

Wilder struggles a lot in his fights, but his power is what bails him out every time. That’s how Wilder made it on the 2008 Olympic team despite not having experience. He fought his way onto the team, and won a bronze medal. That was all owing to Wilder’s power.

“Whether he’s signing a song or dancing around the ring, you’ve got to take your hat off to these people. They’re entertainers, and that’s what this sport needs, and they can fight. I think Tyson’s big problem is he can’t punch hard enough to deter people, but he’s very, very tricky. But 12 rounds is a long time to avoid someone, you know? 36 minutes, people think it’s nothing.

“It’s a lifetime when you’ve got someone like Wilder coming at your with an equalizer that we saw against Ortiz. That was magnificent. I felt sorry for Ortiz, because he couldn’t have done anything else, could he? Wallop, and that’s the end of that. Now we’re in a different world with the Saudis at the moment,” said Hearn.

At this point, there’s a good chance Wilder does knockout Fury. Wilder has improved since his fight with Fury, and he’s looking very hard to beat right now. He knows how to hit Fury with right hands now, so it’s going to put the 6’9″ British heavyweight in a tough situation. He can’t stand and fight Wilder, because he has nothing to keep him off.