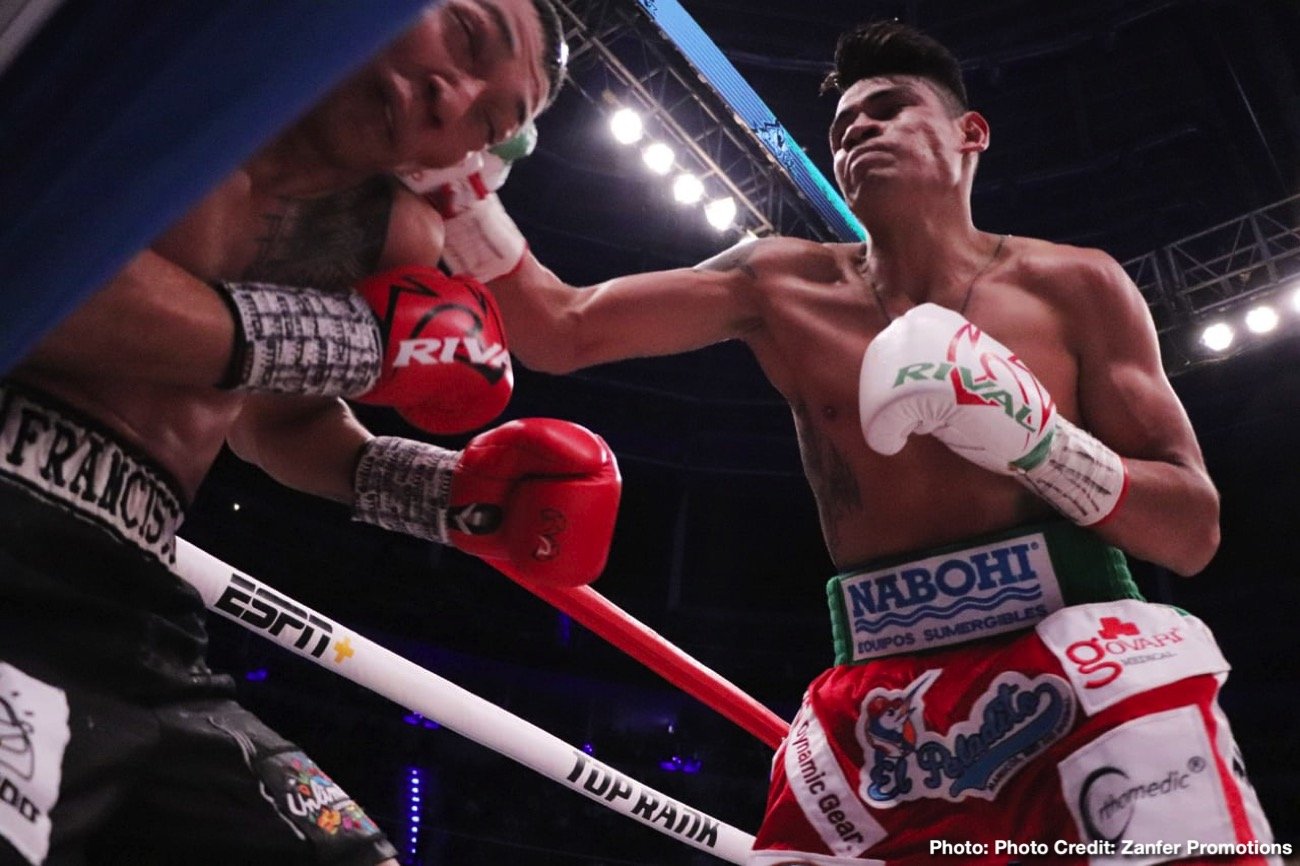 By Jeff Aronow: In a beautiful display of power punching, WBO super bantamweight champion Emanuel Navarrete (30-1, 25 KOs) stopped Francisco Horta (20-4-1, 10 KOs) in round 4 on Saturday night in fight shown on ESPN+ in a Top Rank Boxing promoted card at the Auditorio GNP Seguros in Puebla, Mexico.

Navarrete pinned Horta to the ropes in round 4, and unloaded on him with a flurry of huge shots that snapped his head repeatedly. Finally, the referee stepped in and halted the contest when he recognized that the 26-year-old Horta was hurt and close to being dropped. The fight was halted at 2:09 of round 4.

Navarrete power shots too much for Francisco

Horta had been fighting with his back against the ropes off and on since the 2nd round, and was doing a fairly decent job of eluding some of the punishing shots from the 24-year-old Navarrete. However in the 4th round, Horta’s luck ran out when Navarrete put together a flurry of speedy shots that came straight down the middle.

After a slow start in round one, the 5’7″ Navarrete relently stalked Horta around the ring, throwing leaping shots from odd angles, and looking unorthodox to the extreme. The shots weren’t thrown with much hand speed by Navarrete, but they packed a wallop. The combination of the odd angles, power and the high volume was ultimately too much for #13 WBO.

When the fight first started, Navarrete didn’t look that special with the slow jabs that he was throwing, and wide hooks. Horta was able to get out of the way of a lot of the shots.

Navarrete kept changing stances from orthodox to to southpaw, and landing hard shots from the outside mostly. But when he would get in close, he was landing big uppercuts to the head of Horta.

The ‘W’ for Navarrete was his fourth defense of his WBO 122 lb title in 2019 . He won the belt a year ago this month in beating Isaac Dogboe by a 12 round decision. Dogboe was seen as the favorite going into that match, but Navarrete’s relentless attacking style of fighting wore him down in the second half of the fight.

Navarrete has big plans in 2020 in targeting the other champions at 122 for unification matches. He also is interested in battling bantamweight champion Naoya Inoue if he comes up to 122. With the way Navarrete looked tonight, he might have a difficult time trying to beat Inoue.

The difference in hand speed, technical boxing skills and accuracy between the two is huge. If Navarrete could handle Inoue’s power, he’d make it very tough on the Japanese star with his power, size and reach. It would be an interesting fight if took place, but you’d have to favor Inoue in winning big.