By Robert Addams: Undefeated heavyweight contender Daniel Dubois (14-0, 13 KOs) made quick work of 33-year-old Kyotaro Fujimoto (21-2, 13 KOs) in stopping him in the 2nd round on Saturday night in front of a large crowd of pro-Dubois fans at the Copper Box Arena in London, England.

With the win, Dubois captured the vacant World Boxing Council Silver heavyweight title. Winning that title will enable Dubois to get pushed up the WBC’s rankings, and help him get a crack at the title sooner or later.

The 22-year-old Dubois landed a scorching right hand to the head of Fujimoto in the 2nd round that sent him down flat on his back on the canvas. There would be no getting up from that shot. The referee Victor Loughlin then halted the fight while Fujimoto was still down. The official time of the stoppage was at 2:10.

Fujimoto stood in front of Dubois the entire fight

#13 WBA Fujimoto made it easy for the 6’5″ Dubois to knock him out though, as he stood in front of him the entire fight rather than using movement to keep away. In round 2, Fujimoto fought off the ropes at times, and took some massive shots to the head. It was the worst possible move that Fujimoto could do against a big, slow heavyweight like Dubois, because it made it easy for him.

On the positive side, Dubois showed excellent punching power, and a nice jab. He cut off the ring well, and did a good job of forcing Fujimoto to defend. Dubois’ was solid, but he didn’t have to deal with too many shots because Fujimoto looked like he was afraid. 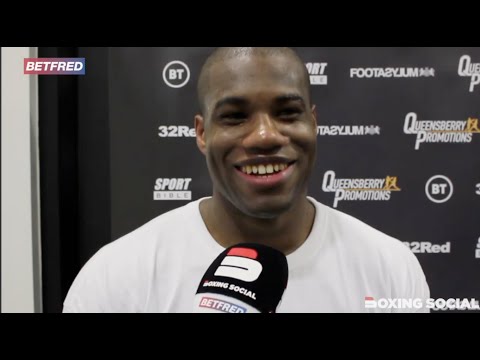 On the negative slide, Dubois looked painfully slow of hand and foot, and didn’t show the reaction time of the elite heavyweights like Deontay Wilder and Anthony Joshua. Dubois’ lack of hand speed could prove to be a major problem for him when he steps it up against the talented heavyweights in the division in the future. The way that Dubois fought, he’s not going to beat any of the top heavyweights unless they stay stationary.

“Of course, I just need to land the right hand, and then it’s good night,” said Dubois to secondsout. “There’s definitely more to work on. Me getting to the next level of the heavyweights out there. I just got to break through, and then I’m there. Whoever Frank [Warren] wants to put in front of me. They’ve got Americans or whoever they have around the world. If I keep knocking them out, there won’t be any need for that.

“Once I land my shots clean on that, anybody is going out. I don’t care who you are. 100 percent,” said Dubois when asked who he’d bet on in a fight between him and Joshua. “Listen, against any fighter out there, I’d bet on myself 100 percent. I don’t care who you are, what title you’ve got. It doesn’t mean c— to me. Once I’m in the ring, I’m going to perform to the best of my ability, and go out and give you all I’ve got.

“Whenever,” said Dubois when asked when he’ll be fighting next. “Frank is the man. He’ll tell you. Maybe early next year. I’m finding myself now in the pro ring now, and my style is coming into play,” said Dubois. 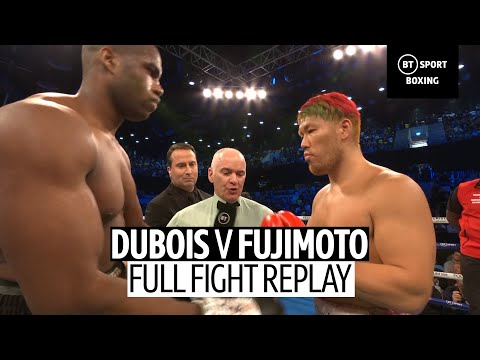 Junior middleweight contender Liam Williams (21-2-1, 16 KOs) defeated Alantez Fox (26-1-1, 12 KOs) by a 5th round knockout to win the vacant WBO intercontinental title. The heavy-handed Williams stalked the weaker Fox around the ring, nailing him with huge shots from the 1st round.

Fox lacked the power to stand up to Williams, and he was forced to move around to try and elude him. In the 4th, Williams knocked Fox down with a nice right hand to the head.

Things started to completely unravel for Fox in the 5th, as he was docked a point for holding. Not long after that, Williams finished Fox off with a series of power shots that dropped him. The referee then stopped the massacre. The time of the stoppage was at 2:59 of round 5. 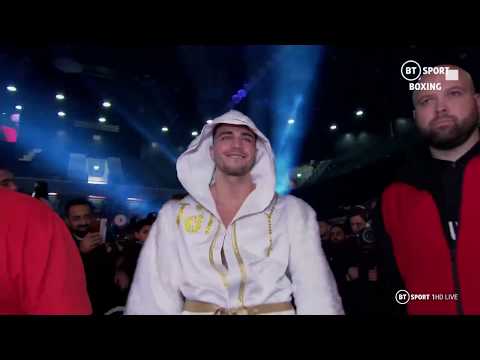 Light heavyweight prospect Tommy Fury (3-0, 2 KOs) stayed unbeaten with a 1st round knockout win over journeyman Przemyslaw Binienda (2-27, 2 KOs). Fury didn’t bother with form, as he stormed after the over-matched Binienda in knocking him down two times.

The referee then halted the mismatch after the 2nd knockdown of the round. It was hard to tell whether Fury, who is the half brother of Tyson Fury, will pan out as a professional. He’s got a LONG way to go before he can be mentioned in the same breath as IBF/WBA light heavyweight champion Artur Beterbiev.

Heavyweight prospect David Adeleye (1-0, 1 KOs) defeated journeyman Dmitrij Kalinovskij (13-63-4, 5 KOs) by a 1st round knockout. This was yet another mismatch on the card, which unfortunately had next to no fights in which the combatants were evenly matched. The time of the stoppage was at 2:25 of round 1. 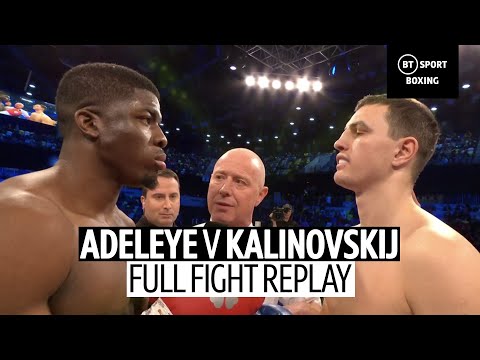 Chavez Jr. hospitalized, having NOSE surgery after loss to Jacobs »