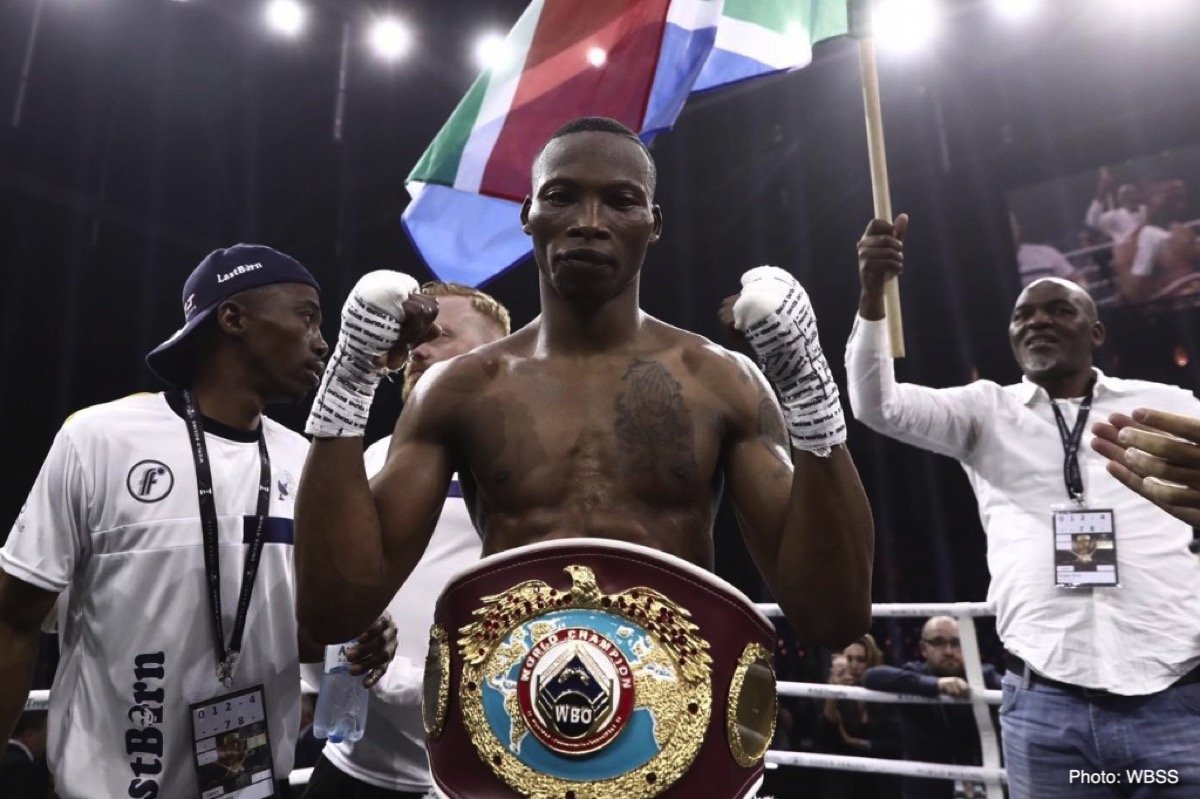 JOHN RIEL CASIMERO will be inspired by his promoter and friend Manny Pacquiao when he challenges WBO bantamweight champion Zolani Tete on Saturday night.

There is plenty at stake and the winner is likely to book a 2020 unification against World Boxing Super Series victor Naoya Inoue, the IBF and WBA champion.

Interim WBO champion Casimero (28-4, 19 KOs) will be flanked by his adviser and Manny Pacquiao Promotions boss Sean Gibbons when he lands in Britain this weekend.

Gibbons said: “I told the Senator (Pacquiao) that Casimero had a tremendous camp and we want nothing less than a victory.”

Casimero travelled to London in September 2016 and stopped Charlie Edwards in the first defence of his IBF flyweight crown he’d taken from Amnat Ruenroeng four months earlier in an upset.

For this fight he has been training in Las Vegas where he has added Memo Heredia a former trainer of Pacquiao’s old rival Juan Manuel Marquez to his team.

Brendan Gibbons, son of Sean Gibbons has looked after the camp there and warned: “Casimero’s on beast mode.”

Casimero, 30, became IBF light-flyweight title holder in 2012 and made three defences before losing it on the scales.

He has lost just twice in eight and a half years since being knocked out by high class South African Moruti Mthalane shortly after his 22nd birthday in March 2011.

Zolani Tete: “Inoue must beat me before he can call himself the real king”

ZOLANI TETE HAS thrown down the gauntlet to bantamweight rival Naoya Inoue, who is hot favourite to overcome Nonito Donaire in the final of the World Boxing Super Series this week.

Boxing fans across the world were hoping for a dream Tete-Inoue match-up in the final of the WBSS when the Queensberry Promotions-backed South African joined the strong field of 118-pounders in the eight-man tournament that also included then world champions Ryan Burnett and Emmanuel Rodriguez.

Tete, the WBO king, unfortunately had to withdraw from the competition ahead of the semi-final stage – where he was set to meet Donaire – after defeating Mikhail Aloyan in his quarter-final.

Veteran ring legend Donaire went on to beat the replacement Stephon Young – via a 6th round KO – in the semi-final and booked himself a meeting with the hot ticket of the division in Inoue, who made short work of his passage to the final by beating Juan Carlos Payano in 70 seconds and then Rodriguez courtesy of a 2nd round KO.

If Tete has his way, the fans won’t be denied the tantalising prospect of a showdown between himself and the 18-0 knockout-artist Inoue.

“Inoue knows he needs to see me if he wants to be bantamweight king,” he warned, ahead of his own return to the ring against mandatory challenger John Riel Casimero at Arena, Birmingham on November 30.

It is unfortunate I had to pull out of the tournament but I am now fit and healthy again.

“I have a tough fight against Casimero on November 30 but, God willing I come through, I definitely want to fight Inoue, added the man from Eastern Cape, who tips Inoue to prevail in his collision with the popular Filipino.

“I believe he will beat Donaire but he knows he must beat me before he can call himself the real king.”

SUNNY SHINES A LIGHT ON CASIMERO

SUNNY EDWARDS SUSPECTS that Zolani Tete will be up against it when he defends his WBO world bantamweight title against John Riel Casimero at Arena, Birmingham on November 30.

The Filipino Casimero is mandatory challenger for the world title held by the explosive South African Tete and Edwards has seen close up the threat posed by the 30-year-old from the stable of ring legend Manny Pacquiao.

Edwards was in the camp of his brother Charlie when he unsuccessfully challenged for the IBF world flyweight title held by Casimero at the o2 Arena back in September 2016 and saw at close quarters the potent punching power possessed by the 28-4 man with 19 KO victims.

Not deterred by personal experience, Edwards has booked his seat for the return of Casimero to the UK in a fight that has got quality written all over it.

“Yeah, 100 per cent I am going down to watch that! ” said Edwards. “I have been wanting this fight for years.

“I genuinely believe – although people might think I am saying it because he beat my brother – that Casimero is very, very dangerous. Disgustingly dangerous, how powerful and explosive he is.

“Obviously he has had a good run of form recently as well so it is a real pick ’em.

“Tete has stalled a bit through injury recently and that has been a bit frustrating, but on his game he is right up there with the best. So is Casimero though and he is not a two-weight world champion for nothing.”

Thrilling prospects Dennis McCann, Shabaz Masoud, Eithan James and George Davey also featuring on the bill, along with talents from the local region in Nathan Heaney and River Wilson-Bent.

Tickets are available now from £40 via TheTicketFactory and Ticketmaster