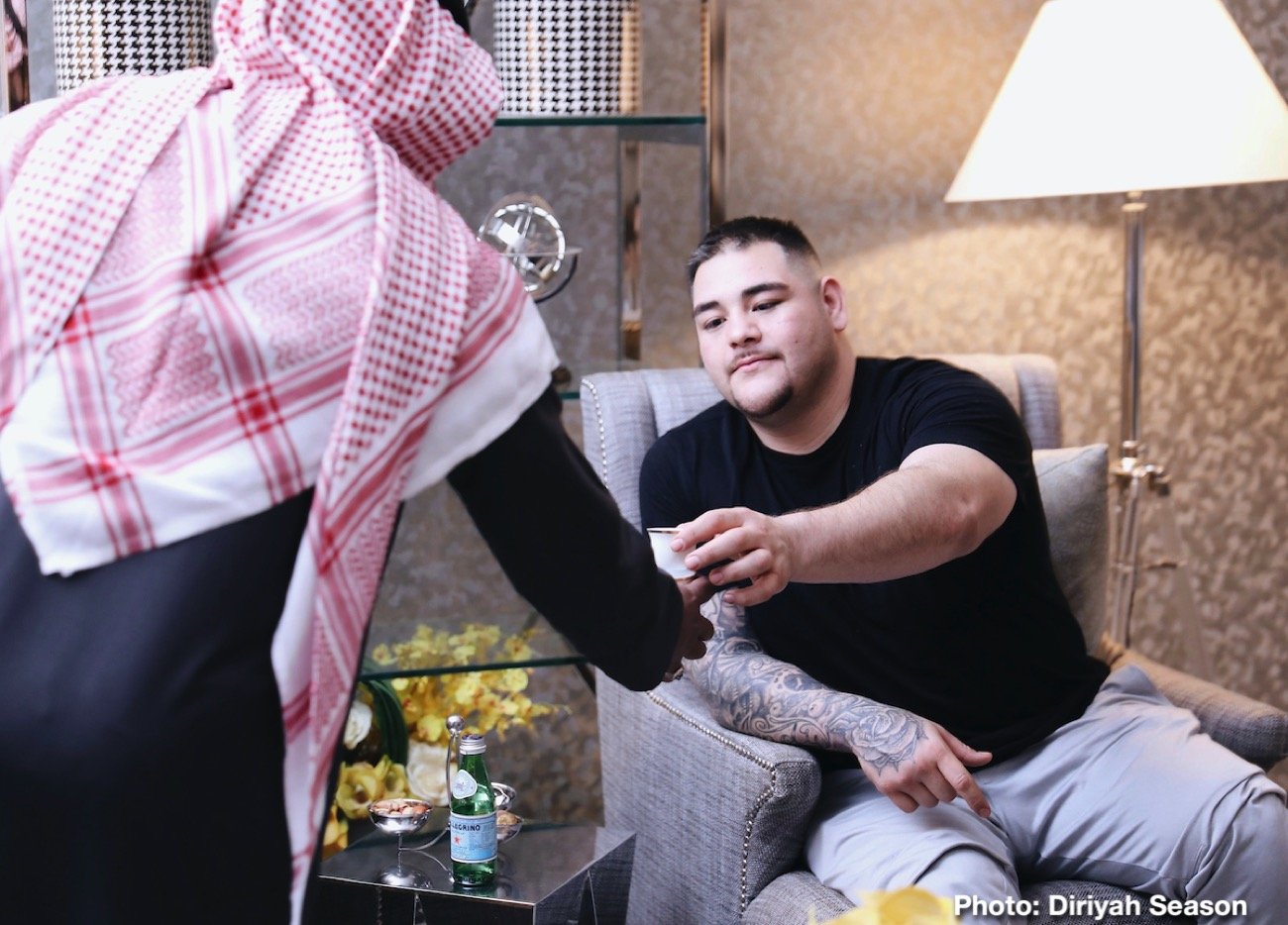 By Scott Gilfoid:  Tyson Fury is lumping heavyweight champion Andy Ruiz Jr. in the same boat as journeyman Dereck Chisora (32-9, 23 KOs) saying that he’s in the same talent class as him.

Additionally, Fury thinks he would easily beat Ruiz (33-1, 22 KOs) if given the chance to fight him. The chances of Fury fighting Ruiz are quite, as he would need to beat Deontay Wilder for him to be in consideration for a fight against him.

Fury’s comments about Ruiz have JEALOUSY & envy written all over them, don’t they? Ruiz is on top of the world as the IBF/WBA/WBO heavyweight champion about to take on Anthony Joshua in a HUGE fight in Saudi Arabia. The world will be watching to see if Ruiz can obliterate Joshua for the second time, and send him into retirement.

Fury is heading into what likely will be a knockout loss against WBC heavyweight champion Deontay Wilder in February.

Lumping Ruiz in the same category as the journeyman Chisora suggests that Fury is behind on what’s going on in the boxing world.

Ruiz made short work of Britain’s best heavyweight Anthony Joshua last June in knocking him out in the 7th round. Andy is now poised to do it again when he faces Joshua (22-1, 21 KOs) on December 7 in Saudi Arabia.

Fury: Ruiz is no better than Chisora

“It’s an awkward style, but it’s tailor-made for me,” said Fury to TG2 when asked if he can beat Ruiz. “He’s 6’2”, squat, leaning forward. That style is easy for me. I think that’s the [Dereck] Chisora style. Is he any better than Dereck Chisora on a good night? I don’t think so. And I handled that quite easily, and closed my eyes actually. I had one hand behind my back.

“That style is easy for me to just jab and move. [Wladimir] Klitschko would make easy work of Ruiz, because that style for him is easy. That style, he’s fought loads of them. I’ve fought loads of them in my career. The average heavyweight is 6’1-2-3, but it’s the ones that are awkward, and gangly or a different style that people struggle with. The conventional styles are always easy to beat,” said Fury.

If Fury actually believes Ruiz is no better than 35-year-old Chisora, then it’s surprising and more than a little sad. It suggests that Fury hasn’t been keeping up with the sport of boxing enough to realize talent when he sees it.

Fury is enjoying himself while he still can before he faces WBC heavyweight champion Deontay Wilder in a rematch on February 22. It’s a fight that most boxing fans see with ending painfully with Fury with him getting knocked out by Wilder. Fury’s days of calling himself the ‘lineal heavyweight champion’ are coming to a close, unfortunately.

That title is very likely going to be transferred over to Wilder on the night. However, it’s unlikely that Wilder will ever mention being the lineal heavyweight champion, because he is not desperate to embellish his credentials to pump himself to the casual boxing fans.

It’ll be interesting to see what Top Rank does with Fury if he loses to Wilder in the rematch. Do they continue matching Fury against Otto Wallin and Tom Schwarz level heavyweights in hoping to make him popular in the U.S, or they finally realize that’s a lost cause. The fans aren’t falling for it.

Chisora looking to fight Usyk next

Chisora could be facing former cruiserweight champion Oleksander Usyk next. Matchroom promoter Eddie Hearn is hoping to put that fight together. If it does happen, Chisora will be a big underdog.

Chisora has past losses against these fighters: