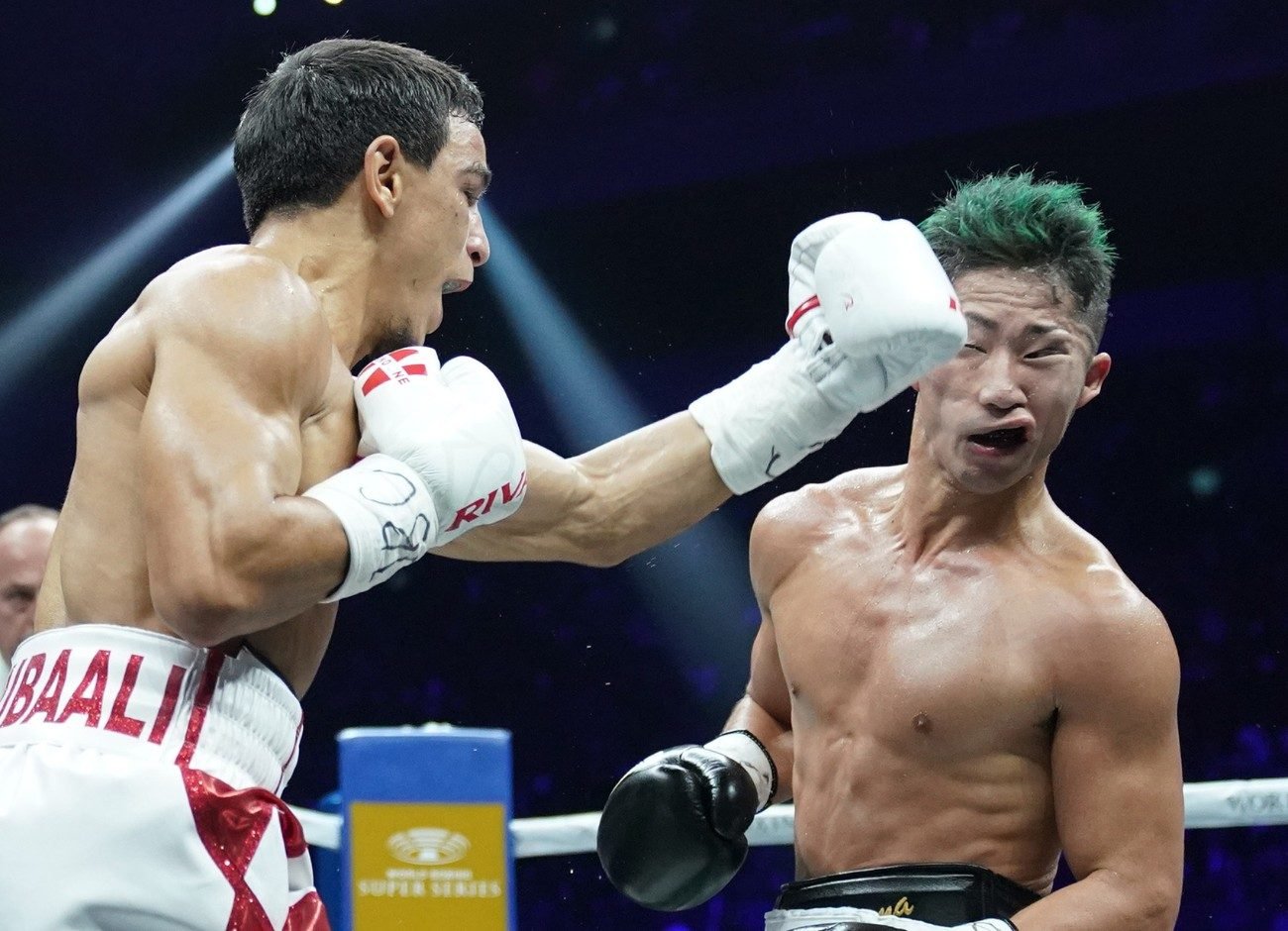 By Chris Williams: In a predictable move, IBF/WBA bantamweight champion Naoya Inoue says he wants to avenge his younger brother Takuma’s defeat to WBC 118-lb champion Nordine Oubaali (17-0, 12 KOs) by facing him in a unification match next.

‘Monster’ Inoue signed a multi-year contract Top Rank Boxing on Thursday, and his fights will now be shown on ESPN. The fans want to see Inoue fight guys that would have a shot at beating him if they’re going to be watching him on the ESPN+ app. Oubaali would have no shot at all of defeating Inoue in this writer’s opinion. This would be a mismatch.

Naoya could stall his own career if he’s going to focus on avenging his brother Takuma’s losses. It’s obvious that Takuma is going to continue to lose each time he steps it up against a decent fighter. What happens then? Does Naoya have to freeze his career each time in order to avenge Takuma’s losses?

You can argue that Takuma would lose to approximately have all the top contenders at bantamweight. What is Inoue going to do when Takuma keeps getting beaten?

This isn’t the fight that boxing fans want to see from Naoya Inoue for his next fight. They want him to face guys like Luis Nery, Emanuel Navarrete, Daniel Roman or Rey Vargas. Those are guys that might beat Inoue.

The Inoue vs. Oubaali fight would have three bantamweight titles [IBF, WBA and WBC] on the line. It’s nice that Inoue wants to unify the 118-lb division, but the casual fans don’t care about that kind of stuff. There’s too many titles as it is, and the fans prefer to see good fights involving POPULAR fighters. Oubaali isn’t popular in the U.S, and he’s not someone that the fans are calling for Inoue to face.

Oubaali beat Takuma in the co-feature bout on the Inoue vs. Nonito Donaire card last Thursday night at the Super Arena, in Saitama, Japan.

Oubaali is an obscure guy that hasn’t looked impressive at all since winning the vacant World Boxing Council 118-lb title last January in beating Rau’shee Warren.

Since that fight, Oubaali has successfully defended his WBC bantamweight title twice in beating Arthur Villanueva and Takuma. The 118-lb isn’t a popular one. The only reason it’s getting notice now is the World Boxing Super Series tournament that has taken place this year involving Nonito Donaire and ‘Monster’ Inoue.

The 33-year-old Oubaali didn’t look overly impressive in defeating Naoya’s previously unbeaten brother Takuma Inoue (13-1, 3 KOs) by a 12 round unanimous decision last Thursday night. Oubaali’s victory was more of a case of Takuma being weak, slow and defensively poor rather than him showing great talent.

Takuma came into the fight as the interim WBC bantamweight champion. He had won the interim WBC title after beating Tasana Salapat last December. Salapat is a fighter with a record that is highly inflated. His career wins have come against a lot marginal opposition. You can argue that Takuma came into the fight with Oubaali with no experience against world level fighters. As such, it wasn’t a surprise that he was soundly beaten by Oubaali.

If Oubaali was a gifted fighter, he would have destroyed Takuma, because he was nothing special at all. Takuma, 23, has none of the speed, power or talent that Naoya has going for him. Oubaali seemed only capable of fighting hard for a minute of every three-minute round. He would fight hard for 10 seconds, and then need a long rest break. Takuma would then come forward land a few weak shots, and then it would be a repeat. It was a poor fight from both guys from start to finish

Oubaali defeated Takuma by the scores 115-112, 120-107 and 117-110. It’s a miracle that Takuma went the distance at all, because he was hurt in round 2, and dropped in the 5th. You can argue that the only reason Takuma went the full 12 round distance is because Oubaali lacked the engine to fight hard enough to stop him.

Former four division world champion Nonito Donaire (40-6, 26 KOs) gave Inoue (19-0, 16 KOs) the fight of his life last Thursday in losing a 12 round unanimous decision. Inoue was cut over the right eye in round 2, and staggered in the 9th. If the 36-year-old Donaire was 10 years younger, we would likely seen Inoue suffer his first loss of his career. Donaire fought like he had found the Fountain of Youth against Inoue.

The size difference between the two was significant, as it looked like Donaire was fighting a flyweight. Inoue doesn’t have the same size that some of the bantamweights possess. That’s unfortunate, because the division is barren of names. If Inoue stays at 118, he’s going to languish there without the popular guys that he needs for him to become a star in the U.S.

« Andre Ward WON’T come out of retirement for Canelo Alvarez