Jerwin Ancajas vs. Jonathan Rodriguez cancelled due to visa problems 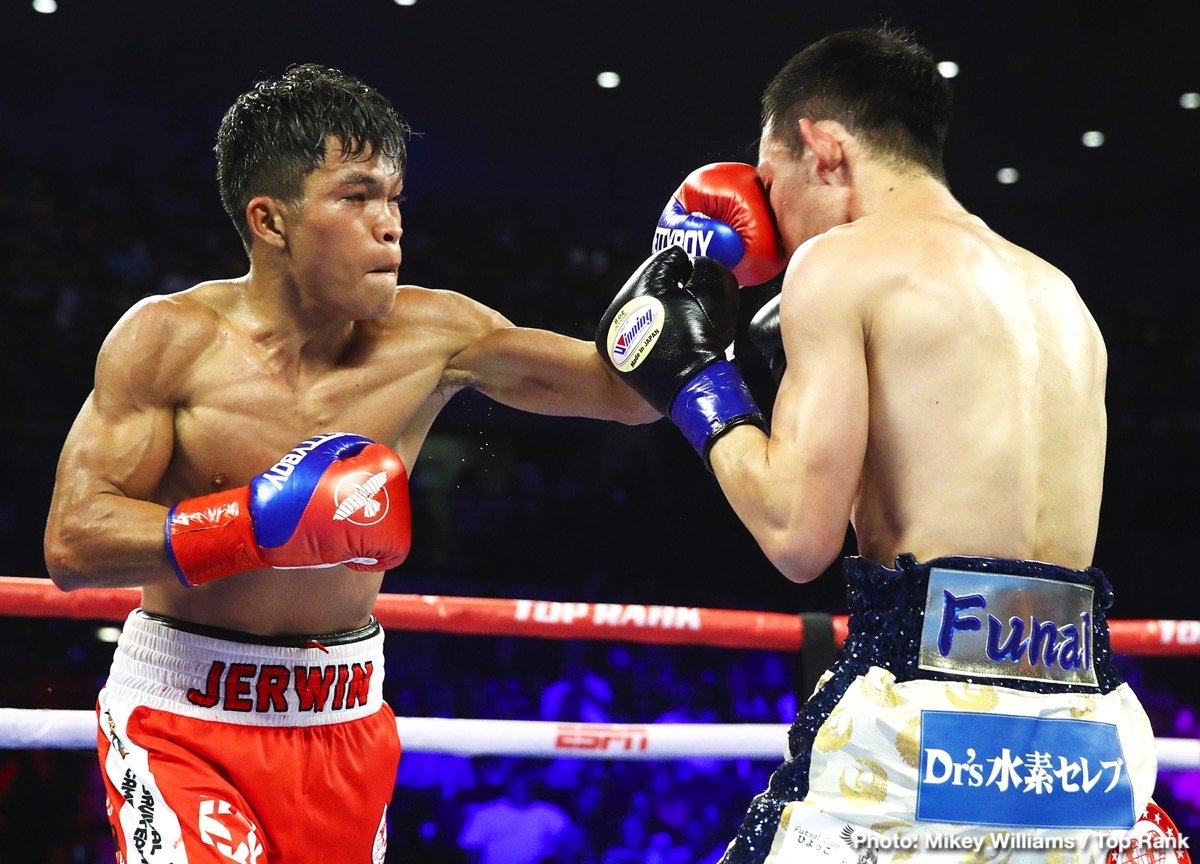 By Barry Holbrook: The fight between IBF super flyweight champion Jerwin Ancajas (31-1-2, 21 KOs) and Jonathan Rodriguez (21-1, 15 KOs) has been cancelled for this Saturday. The 24-year-old Rodriguez, who comes from Mexico, was unable to make the trip due to a visa problem.

Ancajas vs. Rodriguez was supposed to be the chief support for the headliner fight between WBC super featherweight champion Miguel Berchelt and Jason Sosa at the Dignity Health Sports Park, in Carson, California. The card will still be taking place fortunately.

Ancajas vs. Rodriguez fight is being talked about being moved to December 7th on the undercard of WBO super bantamweight champion Emanuel Navarrete’s next title defense in Mexico, according to the Manila Bulletin. It’s a decent fight for Ancjas, but hardly a great one. However, Ancajas, 27, is a vulnerable champion as we saw recently in his 12 round draw against Alejandro Santiago Barrios last year in September 2018 in Oakland, California.

Barrios fought well enough to deserve a win in that fight, but the judges gave the A-side fighter Ancajas a questionable draw. That fight showed that Ancajas is someone that likely won’t hold onto his IBF 115-lb title much longer without help from his promoters at Top Rank Boxing.

They need to be careful in how they match Ancajas, because he’ll lose his belt if he’s put in with someone a little too good. Hence, Ancajas is fighting second tier guy Rodriguez. He recently lost to Jose Martin Estrada Garcia (5-2) last year by a 10 round decision.

So instead of the Ancajas-Rodriguez being the co-feature, the light welterweight clash between Javier Molina (20-2, 8 KOs) and Hiroki Okada (19-1, 13 KOs) has been moved up into that spot. It’s an interesting fight, but not quite as compelling as the Ancajas vs. Rodriguez fight would have been. Molina and Okada aren’t major players at 140.

Molina tried stepping it up twice in his 10-year professional career and was beaten by Artemio Reyes and Jamal James. Since his lopsided 10 round unanimous decision defeat to James in 2016, Molina has won his last three fights against lower level opposition.

As for the 29-year-old Okada, he’s coming off of a disappointing 9th round knockout loss to Raymundo Beltran last February. Okada was dropped three times in the contest by the heavy-handed Beltran. In round one, Okada was knocked down, and twice more in the 9th. Since that defeat, Okada has been out of action.

The Berchelt vs. Sosa fight card will be shown on ESPN and ESPN Deportes beginning at 10:30 p.m. ET/7:30 p.m. PT. It’s an interesting fight, but not one that is expected to end with an upset.

Berchelt (36-1, 32 KOs) is making his sixth defense of his World Boxing Council 130-lb title that he captured in 2017.  Since capturing the WBC belt with an 11th round knockout win over Francisco Vargas (26-2-2, 18 KOs), Berchelt has successfully defended his title against the following contenders:

The hard hitting former WBC champion Miura is the only contender among that bunch that was able to last the 12 round distance against Berchelt. Miura had Berchelt hurt at one point in the fight, but he wasn’t able to finish him.

Former WBA super featherweight champion Jason Sosa (23-3-4, 16 KOs) has a lot of mileage on him, and arguably doesn’t deserve a world title shot given his recent losses. Sosa has lost 2 out of his last 5 fights in defeats against Vasiliy Lomachenko and Yuriorkis Gamboa. There’s no shame in losing to quality fighters like that obviously, but the fact remains that Sosa’s record is 3-2 since 2017.

That’s not the type of record one would like to see for a world title challenger about to take on arguably the best champion at 130. Sosa has won his last three fights against these guys:

As you can see, Sosa has been fighting weaker opposition lately, and he hasn’t done much to redeem himself since his losses to Gamboa and Loma.