Harrison on Charlo: ‘MENTALLY something is wrong with him’ 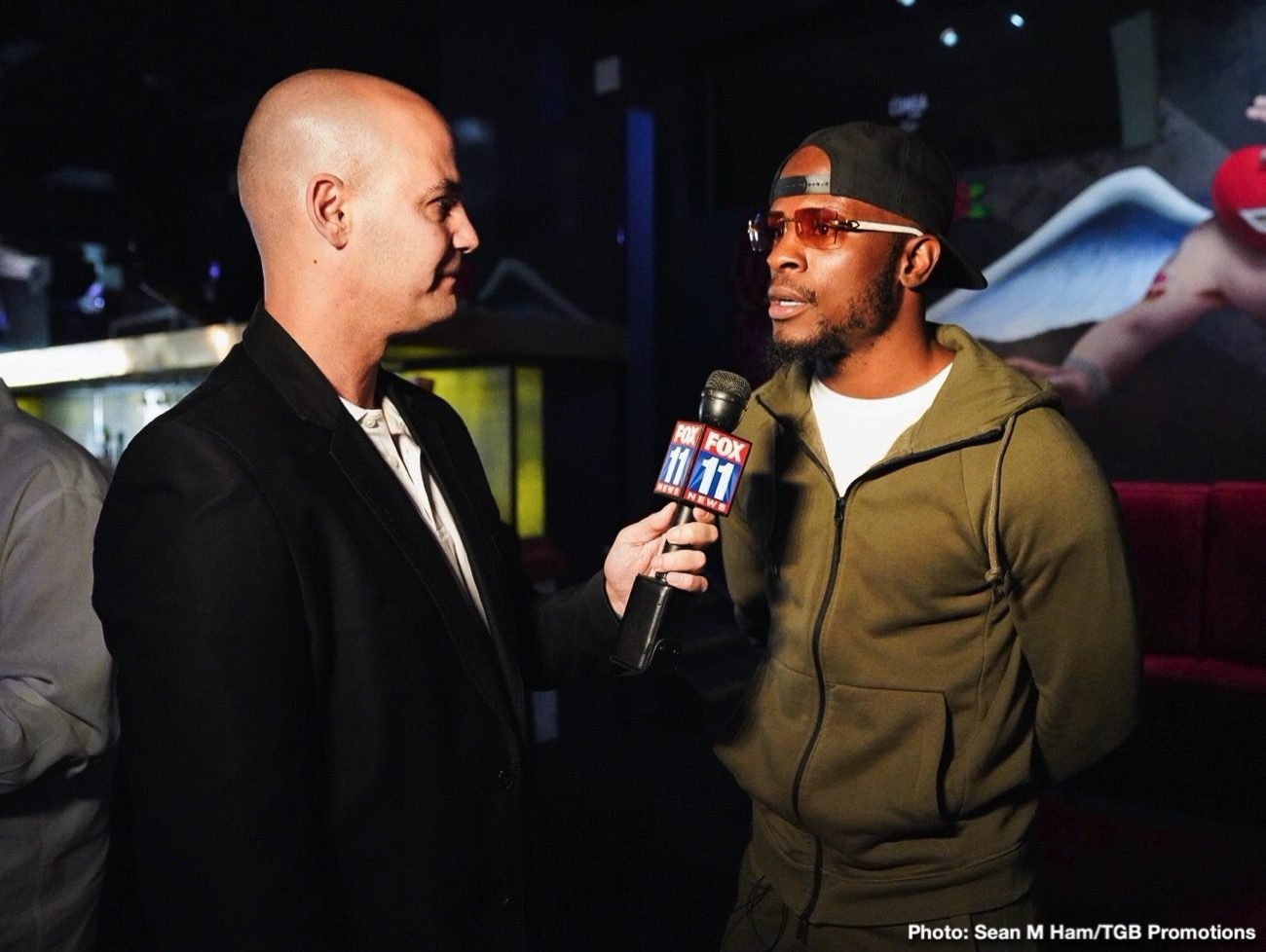 By Jeff Aronow: WBC junior middleweight champion Tony Harrison says there’s something not right with Jermell Charlo mentally with the way he reacted when he got on camera recently, and he says he plans on defeating him in their rematch on December 21.

Harrison (28-2, 21 KOs) and former WBC 154-lb champion Charlo (32-1, 16 KOs) met on Thursday at a news conference in Los Angeles to talk about their fight in December on FOX Deportes from Toyota Arena in Ontario, Californ

Charlo, 29, was in a highly agitated state during the press conference, switching topics frequently, and not making a lot of sense. A lot of the stuff Charlo was talking about sounded disjointed much of the time, and he came across as paranoid.

There were two basic themes that Charlo repeated constantly and that was as followw: A. He deserved the victory in their fight last December and B. His belief Harrison faked an injury to get out of their rematch last summer

Charlo’s style is tailor-made for me says Harrison

“Listen to me man. When I say my soul is on fire, my ankle has nothing to do with any of that,” said Harrison to Fighthype. “He’s a f— hoe and the world loves him. The fact that the world loves him, it hurts my heart. Where are the real mother f— at? I’m going to be ready for whatever he throws at me. I’m just training my body to go through what it has to go through. It’s going to be war.

“Nothing about this sport is friendly, so it’s going to be a war from start to finish. I’m just putting my body through s—, so that by the time the fight comes, I’ll be ready. His style is tailor-made for me. His style and my style, he would never have the opportunity to beat someone like me. Maybe someone like Jorge Cota might mess around and beat someone like me, because he’s awkward. It’s just the style.

“Jarrett Hurd is the opposite. He does everything wrong. Two left foots, and too left hands. He does everything awkward. So those types of styles may be hard for me to beat, but when it comes down to technique, I’m solid. I was born in the technical academy in Kronk. And I was around those type of fighters that were strong and sharp like he is. I was born around those type of fighters,” said Harrison.

Harrison beat Charlo by a 12 round unanimous decision last year on December 22 in New York. The scores were 115-113, 115-113 and 116-112. Harrison took advantage of Charlo’s aggressiveness by hitting him with jabs and hard shots as he could come forward looking to land his shots. Charlo tried too hard to score a knockout, and that worked against him. He never did make adjustments to what Harrison was doing, and it cost him.

Something is mentally wrong with Charlo says Harrison

“He’s got a basic game. Nothing flashy about him,” said Harrison about Charlo. “He do everything wrong like a female or a broad. We’re pushing to the max. We understand that one fight may change our life. Everything was super respectable, but then he got on camera and that showed me something is wrong with him mentally when he got on camera and lied, saying something I didn’t even say.

“Where I’m from, you can’t show someone love. The fact that I was showing love from the beginning, and he s— on me in the end, showed me why I can’t show mother f— love. And then he got on national TV, and said I said something I didn’t even say. He tried to destroy my character as a man. As a man, who says something like that. He burned some fuel inside me that wasn’t on fire, but he lit it.

“If you can’t see he got little man syndrome, then there’s something wrong. He parades himself like he’s King Tut. And he surrounds himself with a 100 people to make him feel good, and feel better. He talks loud, but he’s not going to do nothing. It’s little man syndrome. If you saw him against Jorge Coto. For three rounds, it was the same fighter. It was nothing different,” said Harrison.

The two fighters have gone back and forth from the build up of their first fight. It’s been entertaining but also confusing to listen to all the stuff that Jermell has been saying.

“Besides him wanting to be mad at the world and mad at everything,” said Harrison. “He walked in there with a serious face. I’m the same. A leopard don’t change his spots. He’s still going to hunt the same way. He’s still the same leopard. It’s all on the line. There hasn’t been a fight that has been more important to me. This is important for me. Nothing else that matters. This has become my life.

It’s not going to be easy for Harrison to unify the division, because he’ll need to beat Jermell and then after IBF/WBA champion Julian Williams. Getting that fight won’t be had for Harrison. But when it comes to fighting the WBO champion Jaime Munguia, that may prove to be impossible. The good news is Munguia is expected to vacate his WBO title soon. Once he does that, then the new champion might be more willing to fight Harrison.

“It shocked me. I was shocked,” said Harrison when told that Jarrett Hurd chose not to fight Julian Williams in a rematch after losing to him. “Hurd is the ultimate type of competitor like me. He’s super competitive. For him to lose the fight. He has a high will. For him to lose the fight, and not take the immediate rematch. He’s still telling himself, ‘You’re going to get the rematch.’ How?

“We’re in the sport of fighting. It’s okay to prove that s— to yourself and grind. As long as you know you put your all into that s—. Sometimes you come up short. That’s not a bad thing to go out and do it again. Some of that shows a character of the man. There’s no way I would have backed down from that opportunity,” said Harrison.

Julian Williams caught Jarrrett Hurd at the right time with him coming off of shoulder surgery, and the recent war with Erislandy Lara. Both of those things took a lot out of Hurd.

“My career has been a great career, and it’s been as fine as it can be. He’s going to have to live up to his word, and I’m going to have to live up to mine. I promise you he’ll respect me. I heard it out of his mouth that I’m on a different level. He knows it. Trust me, he’s running scared of this s—. Link up lions. Where you at. I’m for real about this. It would be great to get a knockout, but he got to go 12.

“He will have to go 12. If he don’t go 12, he’ll have to put 15 on it. I’m with it whatever. That kid can’t stand in there with me, I promise you. Not for real. You haven’t seen a boxer charging me down, and backing me up and putting no hurting on me. This isn’t happening. He don’t have the skillset to do that yet. I named it,” said Charlo.

Jermell should give Harrison the benefit of the doubt about him having an ankle injury. It’s not as if Harrison has ever tried to get out of a fight before in the past. Why would he all of a sudden try and get out of a rematch against a guy that he’s already beaten? It doesn’t make sense.

“You heart it,” said Charlo when asked about Harrison supposedly getting dropped and hurt during a sparring session with DeAndre Ware last June. “It’s up to him to explain that what happened. I want you to go ask him about what happened. You got him before I said all this. Now you go back and ask these same exact questions. He let his city down. I didn’t let mine down.

“I’m rocking with all of you in LA. This is home for me as well. I’m for real about this s—. They took a loss. I got a loss on my record. That’s what separates me and my brother. That’s fine though. I want to be different. I’m going to end this fight just the same way I started it. if he can’t handle this power and pressure I got on me. I’m going to release this anger on that mother-f—-. That mother don’t want to fight me.

“I’m telling you. He can’t get in my head I’m one of the most happiest. I’m really secure, content and happy with myself. You’re the one that wanted to see the fight. You’re the ones that wanted to see this dude get in there with me again, and prove why he won this belt. He never really explained to you what happened. He didn’t have surgery. If I did that, all hell would have broke loose. I been done every VADA test that ever came. If I’m home, what’s up? Welcome to my world. This is the end result of my bull s—. I’ve been a solid person all around, but I’ve been quiet when they disrespect, clown, make fun of.

This is another thing that Charlo can’t prove when it comes to talking about Harrison being dropped in sparring. But even if he was knocked down, those things happen. It’s part of the sport. Any fighter can get hurt if they get nailed by a good shot.

“They got to find something to talk about, and that’s what his thing is. If that was me, and I pulled out of the fight. They would hit me with testing. They don’t want all kinds of s— going on. He didn’t get a clearance. A lot of the questions you ask are against me a little bit, but it’s okay. Why did I lose the fight? Now I’m questioning everything. I’m trying to figure out what really happened. If everyone in the media, and everyone in the world are saying I won, how did I end up losing the fight?

“If so many people, what did they want? Did they want a #2? You guys just lit me up and amped me up, and lit the fire. They fed me the ammo. I’m going to get in there and do what I got to do. I don’t care if they’re all against me. Eventually they’ll ride with me, and turn with me.I have nothing to hide, and nothing to lie. I worked my a– off to get to the position I’m in.

“I didn’t get this s— handed to me. To be honest with you, I shouldn’t have made it to this position. I could have been locked up in prison forever. All the s— I’ve been involved with and seen in my life, but I took the right path in my life and did things right. So I’m happy I’m in the position I’m in. I’m not going to play these in and out games and be fake. This is real life. They got one of those real guys out there, and they got it in this boxing world,” said Charlo.

The winner of the Harrison vs. Charlo rematch can say that they’re the better fighter. It would be best for them to move on after this is over, because there’s too much bad blood between them for there to be a third fight.