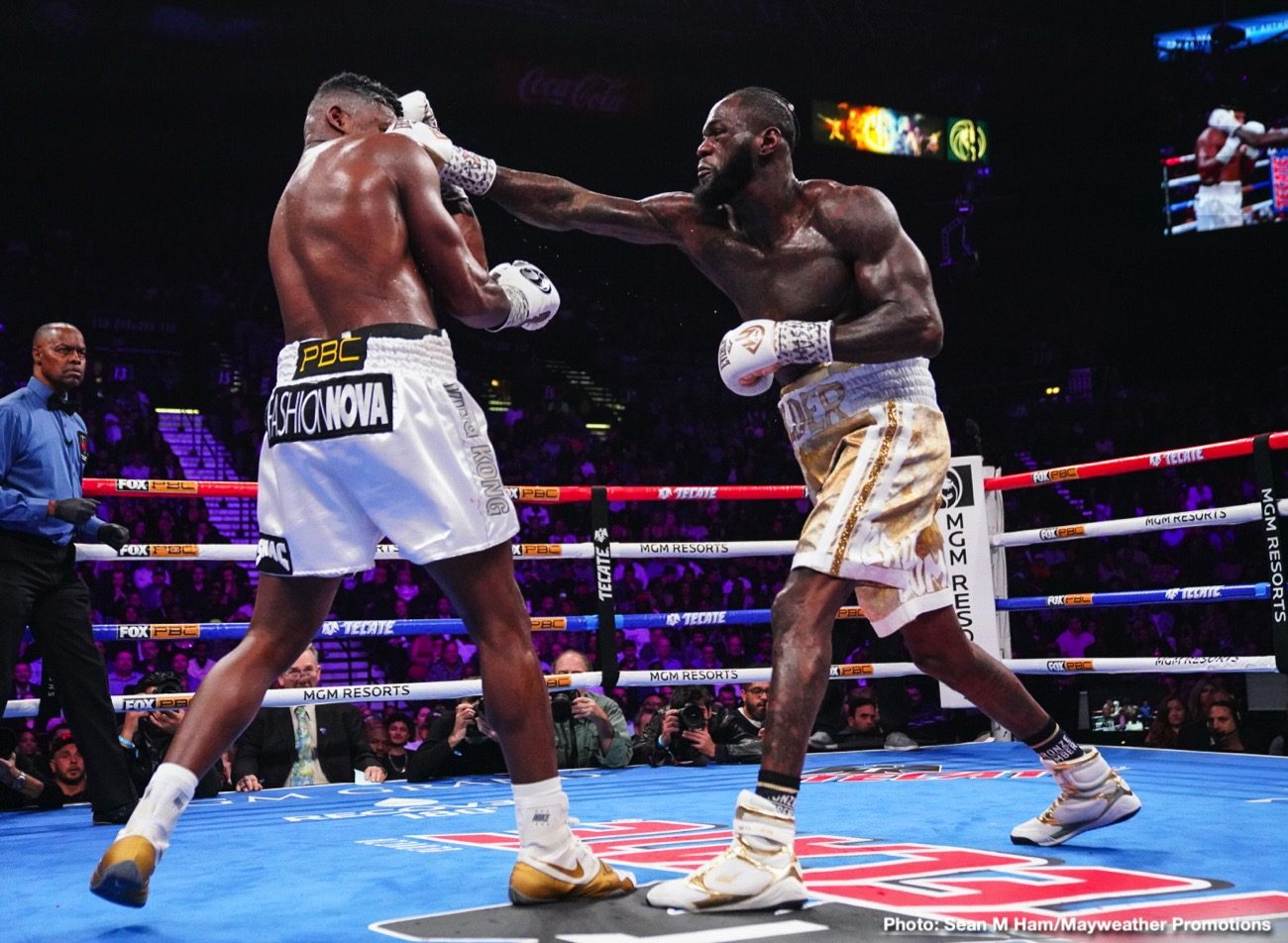 By Jeff Aronow: Deontay Wilder has failed to convince former heavyweight world champion George Foreman that he’s the GREATEST knockout artist of all time despite having the highest KO percentage at 95%. Foreman rated Wilder behind the small heavyweights Joe Frazier, Joe Louis and Mike Tyson.

Foreman does give WBC heavyweight champion Wilder (42-0-1, 41 KOs) as an incredible knockout, but he feels these fighters are above him:

“He’s good but he hasn’t approached Joe Louis, Joe Frazier, Mike Tyson. No, he hasn’t approached that kind of recognition yet. No way,” Foreman said to TMZ.com. “For me, he has to have a performance like Mike Tyson did over Trevor Berbick. Boy, when I saw that, I was down visiting Vegas, and I thought, ‘This guy is a nightmare!'”

Louis, Frazier and Tyson = Cruiserweights in this era

Tyson didn’t look that great in the Trevor Berbick fight. Iron Mike looked like a small fighter, who was getting shoved around by the bigger fighter Berbeck, and looked unsure of himself at times. It’s not surprising that James ‘Buster’ Douglas and Evander Holyfield both beat Tyson not long after his victory over Berbick. There are a lot of heavyweights in this era that hit harder than Tyson. He was a good fighter for a brief period of time in the late 1980s, but he was exposed by a prime Holyfield. Tyson’s two losses to Holyfield weren’t because he wasn’t trained. He simply wasn’t as talented as Holyfield.

Tyson hit hard, but he wasn’t a complete heavyweight, and he was VERY short. Heavyweights at that height can’t exist in this era. They’re too small, and they would be picked apart by the taller guys.

Louis, Frazier and Tyson were all SMALL heavyweights that arguably little more than cruiserweights. Joe Louis and Joe Frazier were a little over 200 lbs, and you can’t compare them to the huge heavyweights in this era. While Wilder is light for a heavyweight at 219 lbs, he’s got the height at 6’7″ that assists in him in generating power that the smaller heavyweights like Frazier, Tyson and Louis didn’t possess. You can’t call those guys true heavyweights, because they fought in a weak era with smaller fighters.

Foreman fails to mention Earnie Shavers (74-14-1, 68 KOs) among those three, and he may have been a harder puncher than any of them. Shavers also had a higher KO percentage at 76.4% than those three. In looking at video of all four, Shavers appears to be a harder puncher. If we’re going to go on KO percentage alone, Shavers is the superior knockout puncher than Tyson, Frazier and Louis.

This writer left Jack Dempsey off consideration for being one of the hardest punchers ever, because he was essentially a light heavyweight fighting at heavyweight. Dempsey would typically weigh-in from 185 to 192 lbs. That’s not even heavy enough for Dempsey to be a cruiserweight in this era. You can’t consider Dempsey as having the kind of power that the big guys ike Wilder possesses.


« One last run for Rigondeaux?

Zolani Tete vs. John Riel Casimero on ESPN+ this Saturday »