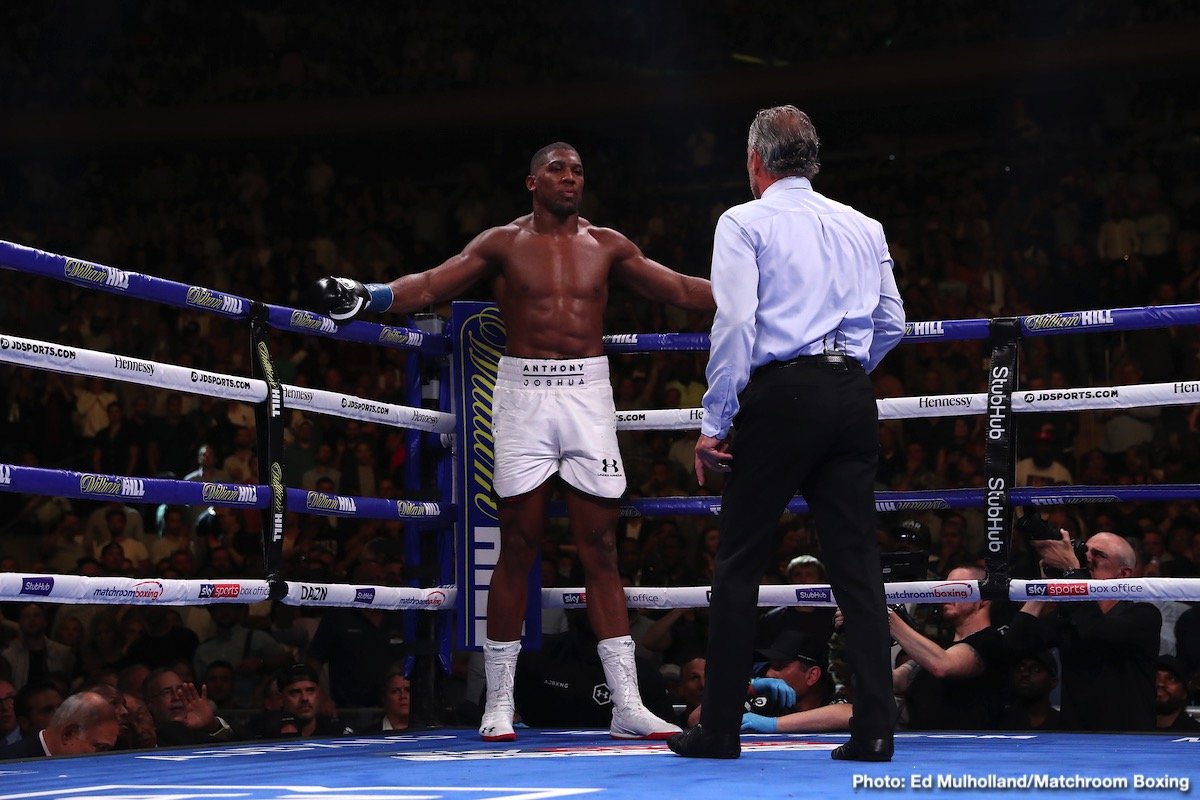 By Scott Gilfoid: It’s been five months since Anthony Joshua lost his heavyweight titles to the unheralded Andy Ruiz Jr. on June 1, and the belief is still there with fans that AJ quit in that fight in the 7th round. Joshua (22-1, 21 KOs) doesn’t agree that he did, but actions says otherwise.

What we know is Joshua perched himself against the ropes and placed both arms on the ropes after he was knocked down the second time by Ruiz in the 7th. When referee Michael Griffin attempted to get Joshua to acknowledge whether he wanted to continue, he was mute. When a fighter fails to respond to a referee’s questions, that’s a sign that they’re quitting.

Froch and Haye think Joshua looked like he was quitting

Both Carl Froch and David Haye both seem to believe Joshua quit against Ruiz. Haye, who had been involved in many wars in his career, openly says he would NEVER turn his back on a referee and expect him not to stop the fight after he’d been dropped.

If Joshua didn’t QUIT in the 7th round against Ruiz, then these could be the reasons why he didn’t look ready to continue:

You can argue that Joshua was counting on the referee to stop it, and then he could complain afterwards that he hadn’t quit.

“I would never get up in a fight at eight and turn my back on the ref, because I would expect the referee to go ‘the fight is over!'” said David Have to skysports.com about Joshua. “He goes down, gathers himself, gets up at eight and then turns his back and walks away from the referee at eight.

“That’s one thing I don’t understand, Maybe he realised that it’s the ‘AJ Show’ and the referee is going to give me the benefit of the doubt?” said Haye in discussing whether Joshua quit or not against Ruiz.

Did Joshua think he would get SPECIAL treatment from the referee?

Haye brings up a good point about Joshua possibly believing that this is the ‘AJ Show’, and that the referee WOULDN’T stop the contest after he was dropped twice by Ruiz in the 7th. For the boxing fans that remember Joshua’s match against Joseph Parker in 2018, they saw AJ take his own timeout without asking referee Giuseppe Quartarone.

Did the referee not say anything due to Joshua’s popularity and A-side status? When you get superstar fighters like Joshua, at some point, they believe they can walk on water, and nothing can touch them. So if Joshua mistakenly assumed that Michael Griffin would give him the red carpet treatment after he was knocked down a couple of times by Ruiz in round 7, then his actions speak for themselves.

Did AJ assume referee would give him EXTRA time to recover?

Joshua just thought that the referee would give him all the time in the world for him to slowly collect himself along the ropes before he gave the referee the signal that he was ready to continue. This makes the most sense. Joshua was the King, and he would let the referee know when his head was clear enough for him to resume fighting.

It’s possible that Joshua thought he would be given the red carpet treatment by the referee to be allowed the recover fully in the 7th. Unfortunately, the referee could not obliged him. Referee Michael Griffin would have looked bad if he’s given Joshua the extra time that he needed to clear his head. I mean, what excuses could Griffin have given for letting Joshua languish in his corner with his arms resting along the ropes? AJ had already gotten his mouthpiece put back in after he spat it out in a move that most belief was an attempt to buy time.

The reason why it’s important to look bad at this now is it gives one some insight to what could take place in the Joshua-Ruiz rematch on December 7th. As the saying goes, ‘Once a quitter always a quitter.’ Given that Joshua appeared to quit last time he fought Ruiz, can AJ be trusted not to do it again? Coming events cast their shadows before.

Joshua DIDN’T look like he wanted to continue – Froch

“He walked back to the corner nonchalantly, put his gloves up. Well, that’s ultimately why the referee stopped the fight, because he didn’t look like he wanted to carry on, did he?” said Carl Froch about Joshua’s behavior after being dropped for the second time by Ruiz in round 7.

Gilfoid absolutely agrees with Froch about Joshua looking like he didn’t want to “carry on” after he got put down for the 2nd time in round 7. In other words, Joshua was quitting. What else can you say? There’s nothing wrong with Joshua quitting, is there?

The only bad thing is it gives you a BIG hint about what he’ll do when the going gets tough in his rematch with Ruiz on December 7th. After all, the only way fans can judge a fighter is by looking at their past behavior during tough times. If they quit once, chances are they’ll quit again, right?